Pittsburgh Powers Past the Wild in 7-4 Victory 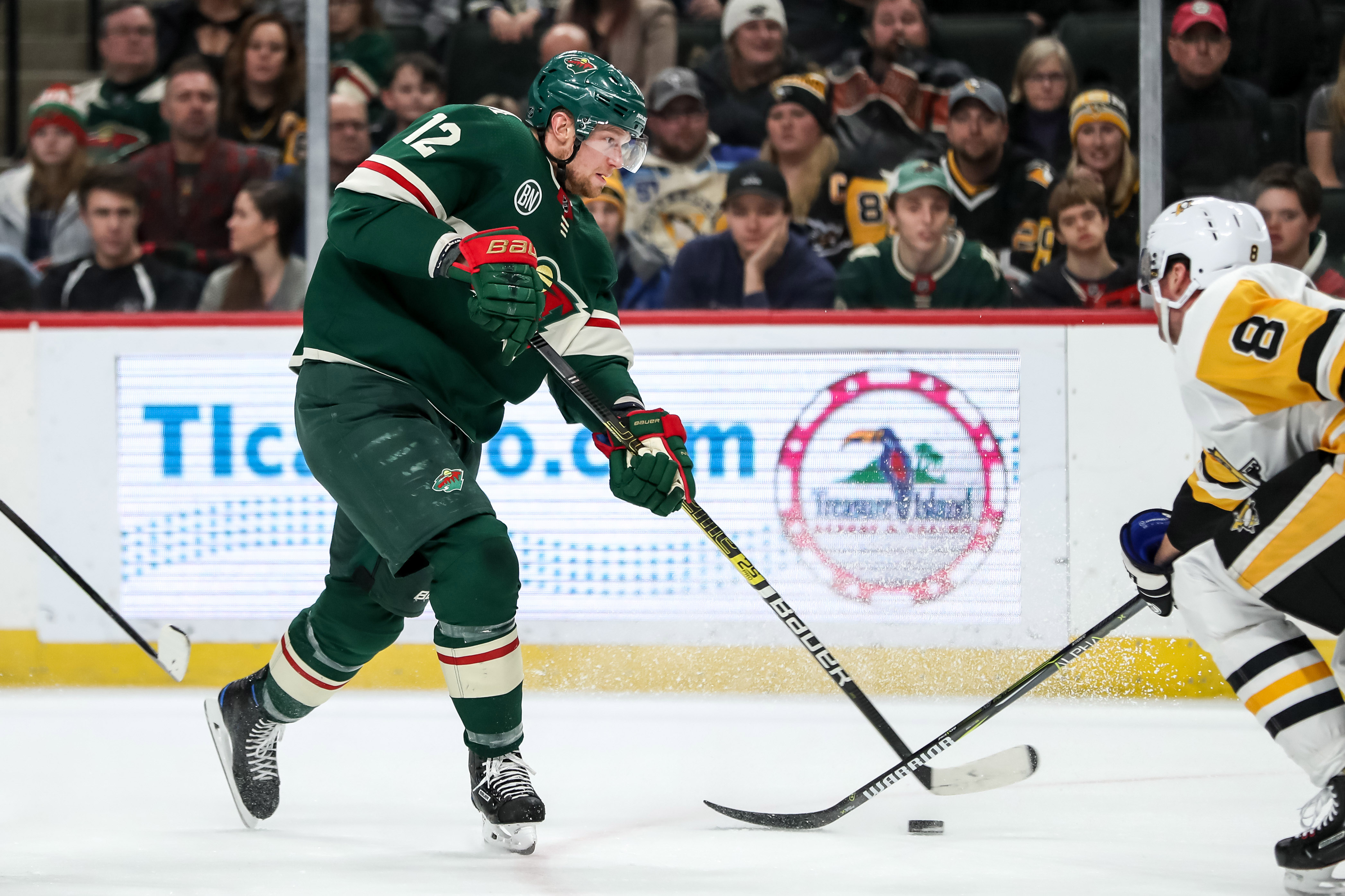 Pittsburgh Powers Past the Wild in 7-4 Victory

The 3-game road trip didn’t go so well for the Wild as they dropped all 3 games to open the 2019-20 season and put an already anxious fan base even more skeptical of the club’s chances this year.  Concerns about a lack of offense appear to be well justified by the fact the team’s forwards have just 3 goals as an entire group this season through 3 games.  Maybe they’ll rediscover their scoring touch at home?  Then again, fans likely remember the fact Minnesota had the least wins of any home team a season ago.

Pittsburgh comes to St. Paul at 2-2, a team led by its superstar Sidney Crosby and an ever changing supporting cast of speedy, youthful forwards.  So in otherwords, kind of similar to the first 3 teams the Wild have faced this season.  Can Minnesota make the most of playing on home ice?

1st Period Thoughts:  Before I say anything else, can someone on the Wild coaching staff explain to this team how it should handle 4-on-4 situations?  It’s about puck possession and player movement and the Wild just panic and poke pucks away and more or less look like a team on the penalty kill even though both teams have the same amount of skaters on the ice.  The Wild attempted to generate traffic in front of Matt Murray throughout the period, but too many times the shots were coming from the perimeter and often were not on goal.  The lines guilty of spending too much time on the cycle and not enough time sending shots on goal were any line with veterans like Eric Staal, Zach Parise or Mikko Koivu out there.  Its going to be tough to get your offense going when all of the shots seem to have to start with the defenseman first.  While the Wild do have a few defenseman who can really fire the puck, the forwards need to take more opportunities to shoot the biscuit.  Jonas Brodin‘s point shot would deflect off a screening Joel Eriksson Ek and ring off the post which has been an all too common scenario for a team struggling to score.  Luckily, Devan Dubnyk was keeping his head on a swivel as he denied Jake Guentzel on a point-blank range chance after a nice pass by Crosby.  At least Ryan Hartman seemed to want to get involved.  Shortly after Matt Dumba got caught with his head down by a clean check by Pittsburgh’s Adam Johnson, and about 30 seconds later Hartman would catch Johnson with an open ice hit and the two would drop the gloves.  Hartman was in control right away and the two would get sent to the box.  Unfortunately, penalties would cost the Wild as Ryan Suter knocked down Brandon Tanev for an easy call.  Just seconds into the power play the Penguins connected as Patric Hornqvist tapped it by Dubnyk.  1-0 Penguins.  The Wild tried answer back by crashing the net but Eriksson Ek was stoned at close range and even as Minnesota swarmed to the crease the Penguins goalie was able to make the stop.  The last few minutes had Dubnyk sprawling around his crease unable to cover the puck as Guentzel nearly made it a 2-0 game on a backhander that went through 5-hole but skittered across the blue paint.  The Wild out shot Pittsburgh 11-9, but the Penguins held the lead where it matters as they led 1-0 going into the 2nd intermission.

2nd Period Thoughts:  The Wild clearly couldn’t keep up with Pittsburgh’s superior team speed and the frustration level was starting to manifest itself as Staal tried took a run at Tanev.  The Wild would end up in the penalty box and the Penguins’ would go on the attack.  Crosby would dangle around a Wild defender and then was stopped by Dubnyk.  30 seconds later the Penguins captain would race through the neutral zone and by a would-be Wild defender who fell down and he’d beat Dubnyk with a wicked backhander.  2-0.  Minnesota would get a power play as Jack Johnson was given an interference penalty.  The Wild would take advantage of it as Brad Hunt threaded a slap pass to Zucker for a redirect by Murray.  2-1 Penguins.  Minnesota would press hard for the equalizer on the very next shift after the power play goal as the 4th line crashed the net and it appeared that Marcus Foligno buried the goal but it was immediately waived off by NHL referee Brad Meier which drew the ire of the home crowd.  The no-goal call exasperated a Wild team already struggling with its confidence.  There were more scrums after the whistle as the Penguins were being feisty around the Wild crease, especially Hornqvist who seemed to be determined to get in Dubnyk’s grill after every save.  After a somewhat better 4-on-4 as both clubs sent two players to the box after this latest scrum the Penguins would go back on the attack.  Pittsburgh extended its lead as Sam Lafferty sent a shot on goal that drew a big rebound from Dubnyk and Adam Johnson stepped into a blast that found the back of the net.  3-1 Penguins to a small chorus of apathetic boo’s from the home crowd.  The Penguins continued to toy with the Wild in its own end, as they were a step quicker to nearly every puck and Minnesota’s carelessness with its passes came back to bite them as Kris Letang swept up a puck and flung a wrist shot that found the top corner of the net behind Dubnyk.  4-1 Pittsburgh.  Minnesota’s effort would fade and the Penguins would strike again as Joey Blandisi was set up by Johnson for an easy tap in.  5-1 Penguins and Minnesota would swap out Dubnyk for Alex Stalock.  You could start to see fans making their way to the exits bit by bit but the Wild started to play a bit angry as the Penguins started to coast a little.  A shot by Victor Rask would set up Jared Spurgeon from near the crease for a shot that just trickled over the goal line.  5-2 Penguins.  The crowd gave an appreciative cheer late in the period as Stalock dismissed a hard shot by Guentzel and Minnesota has some soul searching to do during the next intermission.

3rd Period Thoughts:  Minnesota tried funneling pucks early in the period but it was still the same formula of using the defense to send shots in with players looking to redirect out front.  The Wild’s 4th line would appear to cash in again as Hartman crashed the crease but he’d slide into Murray and Eriksson Ek buried it.  The goal was immediately waived off but the officials would talk things over.  Minnesota would challenge the call on the play hoping to cut the Penguins’ lead to two or take a penalty if it fails.  Tough to argue the choice by Wild Head Coach Bruce Boudreau to challenge this play at this point in the game.  The review confirmed ‘goaltender interference’ and the Wild would go on the penalty kill for delay of game on the failed challenge.  Minnesota would kill the penalty but they’d find themselves a man down once again a few minutes later as Ryan Hartman was tagged for boarding Hornqvist.  Pittsburgh would add to its lead as Hornqvist pounced on a pass from Crosby for an easy tap in that Stalock had no chance to stop.  It was Hornqvist’s second goal of the game to make it 6-2 Pittsburgh.  Minnesota would humor the fans that stuck around the Xcel Energy Center which was looking far more empty at this point as Brad Hunt and Luke Kunin scored on two quick goals from the perimeter to cut the Pittsburgh lead to 6-4.  The Penguins wanted to coast but Minnesota tried to press the issue to make it a 1-goal game as Zucker was stonewalled from close range by a sprawling save by Murray.  The Wild would call a timeout and pull Stalock for an extra attacker with a little over 2 minutes left.  Minnesota teased at making it a 1-goal game, but that would end as Sam Lafferty scored his first NHL goal on an empty-net tally to seal a 7-4 win for Pittsburgh.

G – Hunter Jones (Peterborough, OHL) ~ The big goaltender is off to an excellent start as he stopped all 23 shots he faced earning 1st star honors as the Petes’ blanked Saginaw 4-0 on Wednesday.  He then followed up that solid performance with a 26-save effort in a 6-3 win over Sarnia on Friday.  Jones has a 6-0 record, 2.34 goals against average and .920% save percentage and 1 shutout this season.

RW – Shawn Boudrias (Cape Breton, QMJHL) ~ The power forward had an assist in the Screaming Eagles’ 2-1 loss to Moncton on Wednesday night.  Boudrias has 7 goals, 12 points, 7 PIM’s and is a +5 in 7 games.

D – Marshall Warren (Boston College, H-East) ~ the smooth skating defenseman also got off to a fast start offensively by scoring his first collegiate goal on 2 shots in the Eagles’ 5-3 win over the Badgers on Friday.

D – Fedor Gordeev (Guelph, OHL) ~ the big defenseman had an assist on 3 shots in the Storm’s painful 7-1 loss to Sault Ste. Marie on Friday.  Gordeev has 3 helpers on the season in 6 games.

LW – Vladislav Firstov (Connecticut, H-East) ~ the talented winger had a goal and an assist on 4 shots in UConn’s 5-3 loss to RPI on Saturday afternoon.  Firstov has a goal, 3 points, 0 PIM’s and is a +1 in 3 games.

C – Sam Hentges (St. Cloud State, NCHC) ~ the former Totino-Grace star had an assist on the Huskies’ 2-2 tie against in-state rival Bemidji State.  Hentges has a goal, 2 points and is a +1 in 2 games.