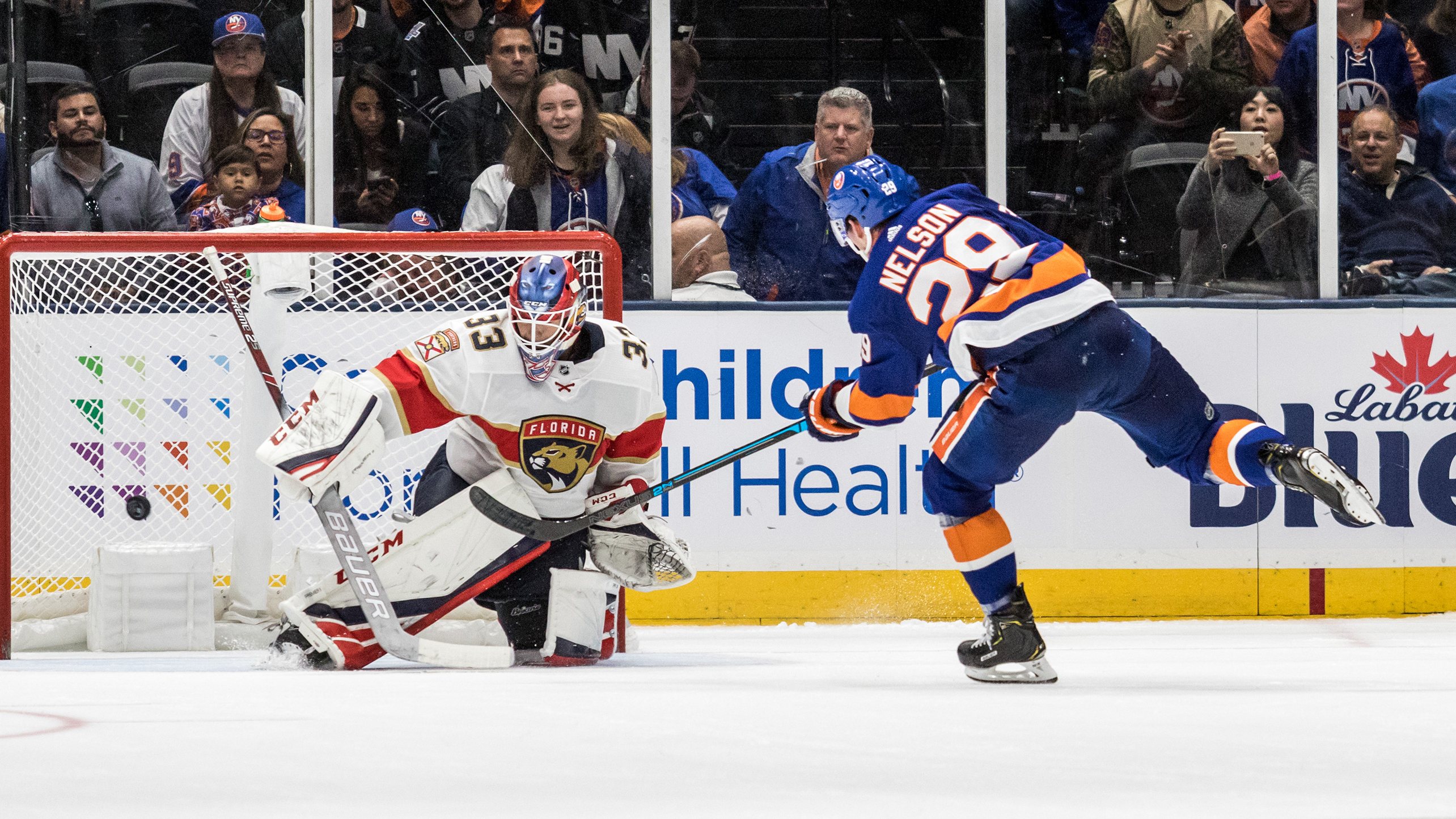 UNIONDALE, N.Y. — The Islanders captured their second win of the season in a 3-2 shootout victory over the Florida Panthers at Nassau Coliseum.

Brock Nelson’s goal in the first round of the shootout served as the winner, while Semyon Varlamov stopped all three Panthers’ shooters he faced. Anders Lee and Josh Bailey both scored in regulation for the Islanders.

Varlamov finished the night with 35 saves in his first win as an Islander.

Denis Malgin scored the Panthers’ opening goal in the first period. Evgeni Dadonov scored the game-tying goal at 13:58 of the third period.

Varlamov plays well in first win as an Islander

It took three starts, but Varlamov finally got a win in an Islander uniform. The 31-year-old netminder faced a high volume of shots on Saturday night from the Panthers.

The 37 shots against were the highest number he’s faced in his three starts. Varlamov faced 28 against Washington and just 19 versus Edmonton before he was pulled.

Varlamov started off the game a little shaky, allowing a goal 5:34 into the first period, but was able to settle down as the contest progressed.

“I didn’t have a good start I can tell you that,” Varlamov admitted. “We were working hard in the practice to find my game to bring the game back. I felt like I was myself today. … Everybody played well defensively like we’re supposed to play. Everybody followed the team structure and then it’s always easier to play for the goalie when there’s no shots from the slot and you see most of the shots.”

One of Varlamov’s more impressive saves of the night came with 7:38 left in the game on a shot from Aaron Ekblad. The Panthers’ defenseman danced around Barzal and fired a wrister at Varlamov, who knocked it down with his glove.

Varlamov then held strong in the shootout.

“He made some big saves for us,” head coach Barry Trotz said. “Obviously in the shootout he was outstanding. I think it’s going to take a little weight off because he’s a real pro.”

On a night when Trotz mixed up the line for the Islanders, one remained the same. The top was left intact on against the Panthers, and it paid off for New York.

The Anders Lee-Mathew Barzal-Jordan Eberle line generated most of the Islanders’ offense during the 65-minute affair. The three combined for seven shots on goal, which was the most of the team’s four lines on Saturday, and Lee and Barzal connected for a goal in the second period.

Barzal specifically continued to show off his prowess on the ice, especially on the setup of Lee’s goal.

“I know he (Barzal) sees me and he knows I am in the slot,” Lee said. “I have to find a lane for him as well, I can’t just stand there. I have to be patient and be ready to shoot when it gets to me”

The only downside for that group was the early departure of Eberle in the third period after taking a hit from Mike Matheson.

The Islanders’ grinder was a noticeable presence on the ice in the team’s shootout win. His fight will obviously be what generates the most notoriety, but his ability to draw two defenders to him during the Lee goal allowed the Islanders’ captain to get open for the shot.

“Johner played the way you want Johner to play,” Trotz said. “Every time he went down the ice he basically got a puck back. … he deserved a chance and he made the most of it today.”

Johnston played 7:08 on Saturday against the Panthers.