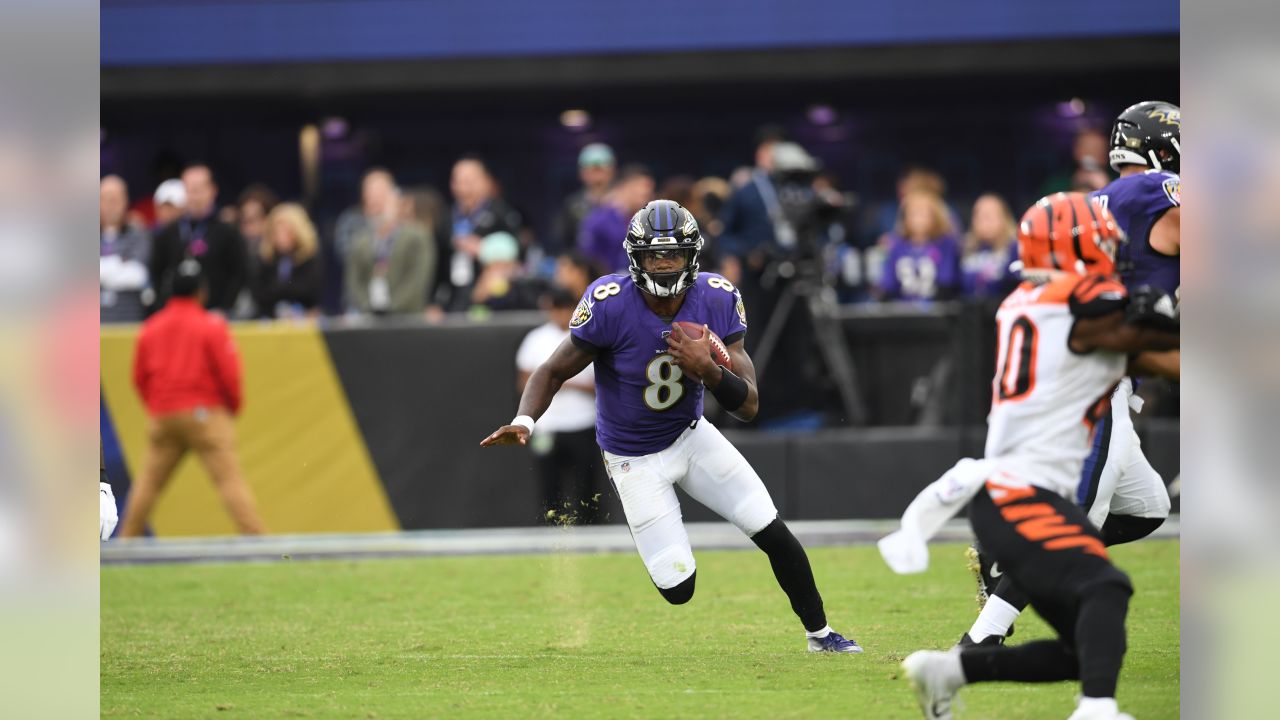 The Ravens went back to a very conservative formula on offense to wear down the winless Cincinnati Bengals. Think of it as “refresh” on their operating system.  Clifton Brown of BaltimoreRavens.com explains:

“Whether Lamar Jackson threw the football or ran it, the Cincinnati Bengals couldn’t contain it. Finishing with 236 yards in the air and 152 yards rushing, Jackson became the first player in the Super Bowl era to top 200 yards passing and 150 yards rushing in the same game.

“It was enough to lift the Ravens to a 23-17 victory over the Cincinnati Bengals, with Jackson setting the tone with a career-high rushing performance.

“For Jackson, comparisons to former NFL quarterback Michael Vick are nothing new, and they won’t stop after this game. With 111 yards rushing at halftime, Jackson became just the second quarterback since 1991 to top 100 yards rushing in the first half. Who was the other quarterback who accomplished that? Vick. As someone who was a fan of Vick’s growing up, Jackson doesn’t mind the comparisons.

“It’s definitely (great) to have a guy you grew up watching all the time, doing all this spectacular stuff, to have my name mentioned with his is pretty cool,” Jackson said.

Jackson (21-for-33 passing) mirrors Vick in his ability to carry an offense with his arm, or his legs. The Bengals (0-6) have struggled to stop the run all season, but it’s usually a running back who does the most damage to them on the ground. On Sunday, it was Jackson.

After Brandon Wilson of the Bengals stunned the M&T Bank Stadium crowd by returning the opening kickoff for a 92-yard touchdown, the Ravens needed someone to turn the momentum back in their favor. Jackson responded.

Preparing for this game, offensive coordinator Greg Roman told Jackson the Ravens would use his legs. Arizona Cardinals quarterback Kyler Murray ran for 93 yards and a touchdown against Cincinnati’s defense last week.

“We watched film on them, and they gave us the looks,” Jackson said. “If I’ve got to run, I’ve got to do it, and today that’s what it was. I did what it took to get the victory.”

“We needed him to run the ball like that to win the game,” head coach John Harbaugh said. “It was a necessity, the way they played us. And he did it. Setting records and things like that, yeah that’s not really something he’s thinking about now. Someday it will mean something to him.”

Regardless of where Jackson went, the Bengals were usually a step behind.

“It’s hard because you got all your skill guys covering down the field, eyes on their man,” safety Jesse Bates said. “And then you got the D-line, and they’re just rushing against basically a running back. It’s pretty tough.”

Jackson was also adept when throwing, going 21 for 33 without an interception. But on this day, his legs counted most.

Cincinnati jumped on top when Brandon Wilson took the opening kickoff 92 yards for a score, but Jackson responded quickly. Baltimore (4-2) finished with 497 yards of offense, and the Ravens retained sole possession of first place in the AFC North.

The Bengals, meanwhile, remain in search of their first win under Taylor.

Andy Dalton went 21 for 39 for 235 yards and scored on a 2-yard run with 1:28 left. But Cincinnati failed to a produce an offensive touchdown over the first three quarters in a third straight game.

Baltimore compiled a 212-6 advantage in yardage and an 11-0 margin in first downs during the first quarter. Jackson led the way with 106 yards through the air and 85 on the ground.

The Ravens scored touchdowns on each of their first two possessions, a 21-yard run by Jackson and a 1-yard plunge by Mark Ingram. The quarter ended just before Justin Tucker kicked a 40-yard field goal for a 17-7 lead.

Late in the half, the Bengals moved to the Baltimore 21 before Marlon Humphrey intercepted a deflected pass. The Ravens gave it back when tight end Mark Andrews fumbled while trying to hurdle a defender, and Cincinnati cashed in with a field goal.

INJURIES:  Bengals: CB Dre Kirkpatrick (knee) was carted off in the first quarter and did not return. … G John Miller left in the second quarter with a groin injury. He did not return. … OT Cordy Glenn (concussion) was inactive for the sixth consecutive week.