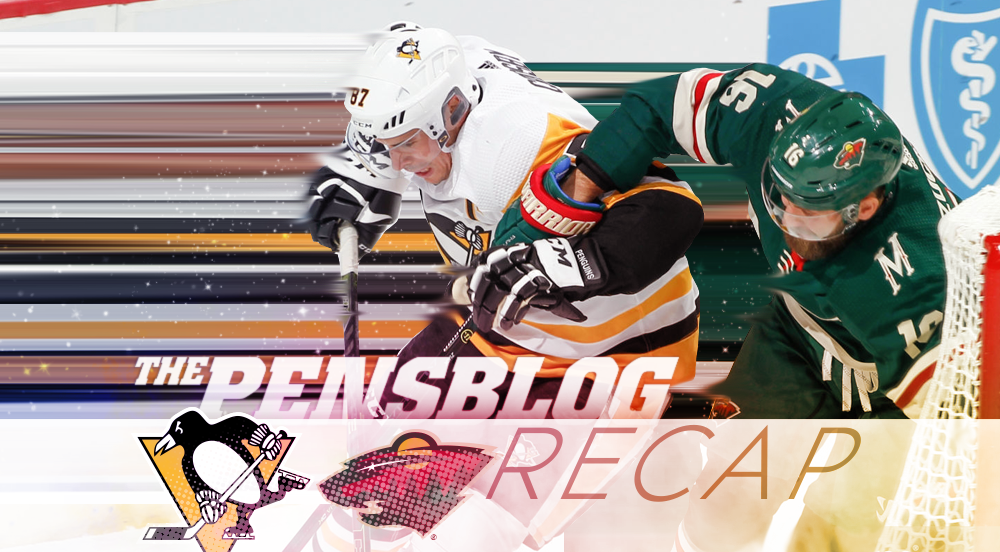 The Penguins took the ice in the “state of hockey” last night for their first road game of this young season. While we were busy wondering which Penguins team would show up the Minnesota faithful were busy wondering if they would finally see their team win this year. The State of Hockey has a nice ring to it, but after losing a team to Texas and now having 19 years of unsuccessful Wild hockey under their belts they should probably change their slogan.

No surprises here as the Penguins rolled out the following starting lineup:

You might be asking yourself, "what line combos will the Penguins use tonight?"

Well, good news: we have that answer ⬇️ pic.twitter.com/i2poterAX8

Recently recalled Blandisi slots in at 4C after the Pens send Agozzino back to the minors following his one minute and forty-four-second effort Thursday night against Anaheim. John Marino gets his third game in a row and Gudbranson is a healthy scratch for a second consecutive time. Let’s go.

The game got off to a pretty quick start with few stops in the first few minutes. In fact, there were only four stoppages in the first seven minutes of play. That fourth stoppage was for a Ryan Hartman penalty that sent the Pens powerplay to the ice. Heading into this game the Penguins powerplay was 3 for 17, a quiet 17.65%. The three goals the Pens had scored came off of faceoff wins where they were able to set up shop in the offensive zone early. When the team has to carry the puck through the ice they have struggled mightily as they continue searching for someone to do what Kessel did so well. During this opportunity, the Penguins had to gain the zone and they did so with a combination of Letang to Crosby to Guentzel. Once in the zone the puck went back to Sid and he cooly surveyed the scene before finding Justin Schultz, and Schultz found the horny one.

As Letang carries the puck up the ice here is a look at the Penguins zone entry:

Letang will feed Crosby right at center red. From here you can see Hornqvist is a bad option with three defenders near him so Crosby takes advantage of a defender not facing him and chips a backhander to Guentzel. Guentzel easily gains the zone and though they almost lose possession Sid comes up with it and suddenly the Pens are set up like this:

Hornqvist and Guentzel in front, two offensive defensemen in position to shoot, and the puck is on the best playmaker in the world’s stick. Yes, please. Side note, I’m in the minority here but I have really enjoyed Letang and Schultz on the first powerplay unit. Schultz with another nice assist to give him three already this year as Crosby notches a point in the first 5 games of a season for the first time since 2015-16, when he carried the team to a cup.

Leading where it counts! 💪 pic.twitter.com/g21OCrPoQn

As the second period started you kind of had that feeling that if Minnesota scored an early one the game might be over quickly. Of course, that could just be PTSD from the way last season went. Fortunately, the Captain had other plans as he busted out a mini breakaway and went top shelf with a nasty backhander

That puck was in and out faster than a member of Drumpf’s cabinet. Matt Murray gets his 4th career assist after not getting any points last year, freaking loser. With the goal, Crosby is now on pace for 133 points this season. You may say it isn’t going to happen, but I’m not going to doubt this guy anymore.

We haven’t picked on Jack Johnson a lot this year because for the most part, he hasn’t done anything stupid. A second after the Crosby goal Johnson decided to get his name mentioned by taking a penalty. Minnesota didn’t waste any time as a shot from the point was deflected by Jason Zucker and in to make it 2-1 Pens. The Pens PK was 5/6 before this goal went in.

Eight more minutes of chippy hockey was played before the Penguins young guys started to have some fun. Eleven minutes into the period the newly assembled fourth line carried the puck into the zone and Sam Lafferty shot one into Dubnyk’s pads. The rebound was gigantic and to the stick of Adam Johnson, who took a full windup and blasted Dubnyk to Dublin

Live it up, Adam Johnson! There's nothing like your first NHL goal. pic.twitter.com/ZuoPjrudFw

Dubnyk made the save off of Lafferty’s shot but then watches his rebound bounce away, realizing too late that he knocked it right to an oncoming forward. Adam Johnson gets his first NHL goal in his home state with a lot of friends and family in the stands, pretty cool. I love the move by Johnson to take the full slapper here, congratulations on your first NHL goal kid. First NHL point for Lafferty as well. A bunch of young kids not afraid to shoot, gotta love it.

Surprisingly, the Penguins would not allow a goal thirty seconds after scoring and instead, they would continue pressing play in their offensive zone. As the Wild became dizzy chasing the Penguins around the zone, Kris Letang snuck in to scoop up a loose puck and bury it up top.

Kris Letang just tucked this puck perfectly into the corner for the Penguins' fourth goal on the night. pic.twitter.com/KqC5ZHEbTz

Before some yinzer with a selfie as a Facebook profile picture with him wearing white sunglasses in the front seat of his car could mention that Letang still sucks on the Penguins Twitter feed the Pens were burying another one.

Blandisi with the meatball goal of the game. I am not entirely sure what Dubnyk is doing here, he puts his hand up for icing well after Johnson gets in front of the Wild defender. Had he played the puck instead of trying to buy a call this goal doesn’t happen. Instead, Johnson gets to it and finds Blandisi out front for his first goal since 2016. As Pat Damp said in the gameday, let the kids play.

With less than four minutes to go the Wild would get some bodies in front of the Pens net and as a scramble broke out Jared Spurgeon would find a loose puck to make it 5-2. Nothing else would happen in the remaining three minutes.

Three out of four categories, not too bad 😉 pic.twitter.com/BQKQKXilqB

With the team having to travel after the game and a comfortable three-goal lead the gameplan in the third was to escape without injury. Marcus Pettersson was already a little banged up and the Pens just wanted to get out alive. They coasted safely through the first ten minutes until they got the opportunity to go on the powerplay. The Pens would set up a shop and a 50/50 puck would squirt to the corner. Crosby would go hard into battle and eventually, the puck came to Hornqvist in the slot. Horny would look up and see Jake the Snake sitting on the doorstep, and Jake doesn’t miss on the doorstep.

Here's another look at the @jakenbake20 goal.

Oh, and everyone gets half off their Jake Shakes at @MShakeFactory tomorrow! pic.twitter.com/D9donVy77i