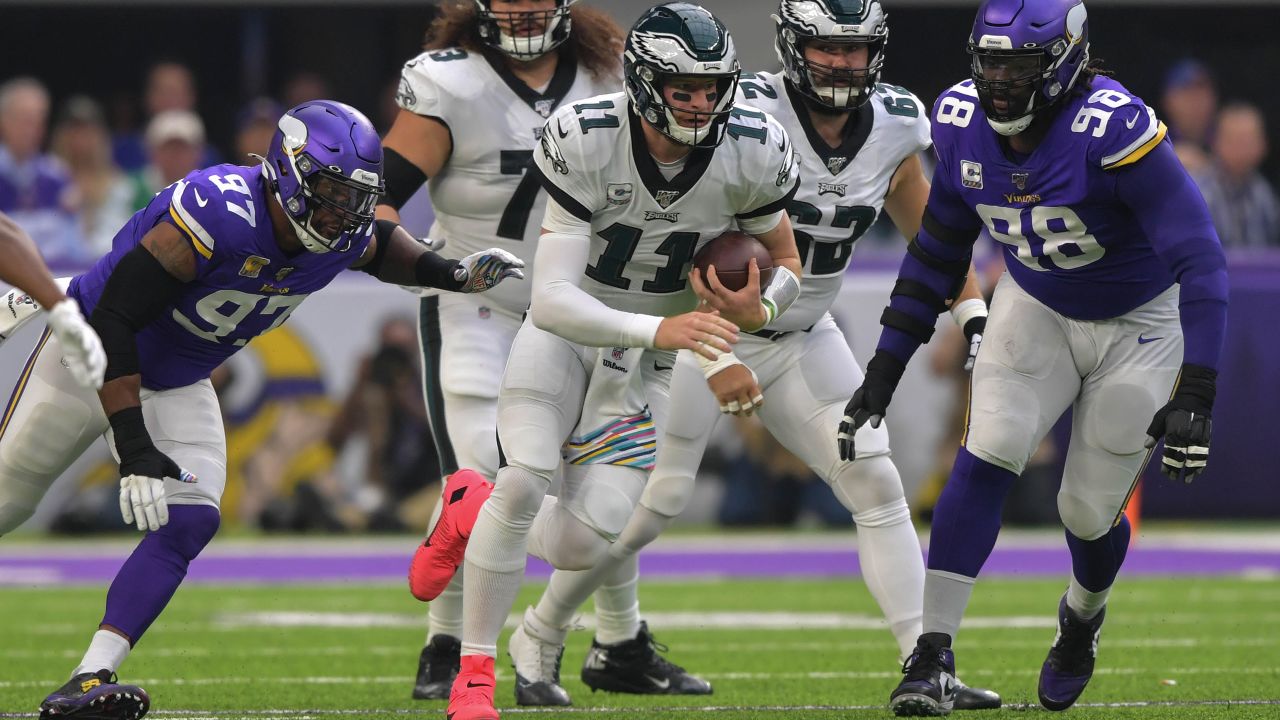 EYE deserve a pie in the face, my game prediction was as off as the Eagles’ secondary coverages…

Sometimes it’s difficult to admit that your team has more holes in it than JB99’s worm farm. But it does, and here we are, exposed again as pretenders by the HOF quarterback himself, Kirk Cousins. We told him we would take away the run and make him beat us with his arm. Perfect, said Cousins. Let me show you how that’s done.

Kirk Cousins threw to Stefon Diggs for three of his four touchdowns, racking up a season-high 333 passing yards as the Minnesota Vikings ravaged the Philadelphia Eagles secondary in a 38-20 victory Sunday.

Diggs scored on plays in the first half that covered 51 and 62 yards, becoming the first player since Randy Moss in 2000 to post two touchdown receptions of 50-plus yards in one game for the Vikings (4-2). His most important catch came late in the third quarter, a double toe tap in the back of the end zone from 11 yards out that pushed the lead to 11 points after Carson Wentz and the Eagles (3-3) had pulled within 24-20 with 17 straight points.

Cousins went 22 for 29 with one sack and one interception that was, oddly enough, Diggs’ fault when a sideline throw hit him in the hands, bounced off his helmet and into the air behind him for former Vikings safety Andrew Sendejo to pick off late in the second quarter.

The sure sign that this was not the Eagles’ day came right after that, when coach Doug Pederson called a fake field goal from the 21 with 20 seconds left in the half. The snap to Jake Elliott left the kicker with only one receiver, well-covered tight end Dallas Goedert, and the desperation throw was tipped by Anthony Harris and intercepted by Everson Griffen.

The Eagles have been badly missing starting cornerbacks Ronald Darby and Avonte Maddox, and Cousins took full advantage with a first half that looked at times like passing drills against the scout team.

Adam Thielen made a slick double move to beat Sidney Jones for a textbook fade throw by Cousins for a 7-yard touchdown to cap the opening drive. After Diggs blew by Rasul Douglas on a post route in the second quarter to put the Vikings up 17-3, he gave Cousins a hearty hug on an all-smiles sideline.

Diggs beat Douglas again on a corner route on the first play of their next possession for the second of his career-best three scores. Even with a 32-yard touchdown pass by Wentz to running back Miles Sanders before the break, the Vikings pushed their first-half scoring advantage in three home games this year to 66-17.

Following an ugly performance two weeks ago in defeat at Chicago that had the passing game out of sorts, Diggs skipped some team activities, drew more than $200,000 in fines and acknowledged unspecified dissatisfaction with the direction of the offense while speaking cryptically about his desire to be with the Vikings.

The Vikings became the first team to hit the 100-yard rushing mark in the last nine games against the Eagles, who surrendered 300-plus passing yards for the fourth time in six games. Rookie Alexander Mattison paced the Vikings with 63 yards, including a 35-yard gain in the fourth quarter to put Minnesota over the century mark. Dalvin Cook, who entered the game ranked No. 2 in the league in rushing yards, had just 41 yards on 16 attempts, a 2.6 yards per carry average. That’s the ironic part—the Birds’ defensive game plan was to limit Cook so they could feast on putting pressure on Cousins in obvious passing downs. But it quickly became a case of Cousins turning the tables on Jim Schwartz and his cast of confusion.

Wentz finished 26 for 40 for 306 yards, two touchdowns and one interception. After the last score by Diggs, the Eagles wilted under the weight of the Vikings pass rush and the crowd noise at U.S. Bank Stadium, where they left as first-time Super Bowl champions following their last visit two seasons ago.

Eric Kendricks and Mackensie Alexander shared a third-down sack after an all-out blitz called by Vikings coach Mike Zimmer forced a punt. Anthony Barr recovered a fumble by Zach Ertz to end the next drive at midfield. Alexander picked off Wentz on the following possession.

That was all she wrote for the Eagles’ slim chances of recovering in this one.

Wentz did some good quarterbacking within the limitations of his protection, which wasn’t great. “I thought he did some really good things,” Pederson said of Wentz. “I thought overall he played tough again in the pocket.”

Running back Miles Sanders hauled in his first NFL touchdown on a wheel route, beating linebacker Eric Kendricks for a 32-yard score. Sanders added a 45-yard catch-and-run in the third quarter to set up Wentz’s second touchdown throw, this one of Alshon Jeffery. The 3-yard strike made it 24-17 Vikings.

The Eagles were unable to get much going on the ground, as Jordan Howard gained 49 yards to lead the team. Philadelphia was able to get into manageable third-down situations to keep the Vikings’ aggressive defense at bay, but only converted 4 of 12 opportunities.

INJURY REPORT:  Eagles: LT Jason Peters hurt his knee in the second quarter, returned briefly after an initial absence and then was pulled for good. Andre Dillard took over. … LB Nigel Bradham (ankle) was also injured in the second quarter and did not return. … DT Tim Jernigan (foot) was out for the fourth straight game, Darby (hamstring) for the third game in a row and Maddox (concussion/neck) for the second consecutive game.

Vikings: Dakota Dozier started at RG for Josh Kline, who sat out with a foot injury. … LT Riley Reiff (ankle) left in the first quarter, returned briefly, then was sidelined in the second half and replaced by Rashod Hill.