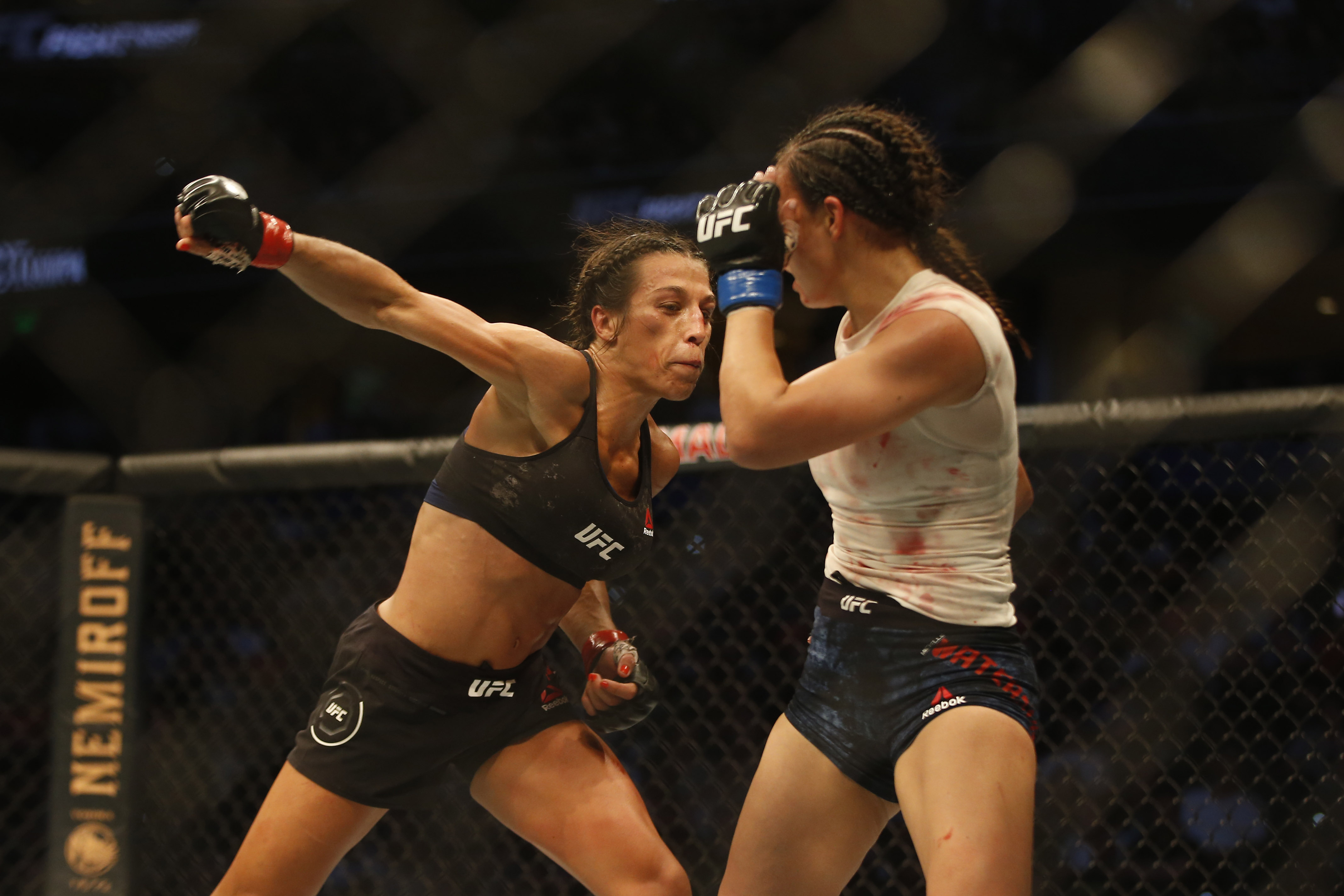 In case we all forgot, Joanna Jedrzejczyk reminded us who the strawweight queen was at UFC Tampa.

In front of over 10,597 fans inside Tampa’s Amalie Arena, Jedrzejczyk looked like her old self as she outclassed Michelle Waterson. Winning the main event fight via unanimous decision (50–45, 50–45, 49–46), Joanna (16-3) blooded up “The Karate Hottie” and managed to block her signature takedown offense. As a result, she secured her spot as top contender in the division she held onto for so long.

“Who’s the real queen?” Jedrzejczyk stated after the fight. “Bow down, bow down, I’m the real queen. Dana, call you in a minute.”

There were questions leading up to the fight as to whether Joanna was in the right frame of mind to compete. After all, she was 1-3 in four fights heading into last night. Joanna was also apparently dealing with weight issues. Knowing she isn’t a natural strawweight, just like Waterson, there were many eyes on her.

Both started off hot with kicks, and even an early takedown attempt by Waterson (17-7). Unfortunately for her, she was 1-for-9 in those attempts. When that wasn’t working, Michelle tried to out-strike Joanna, which was her biggest mistake. Joanna played her like a fiddle, hitting multiple strikes any chance she had.

Bloodied but willing to go on, Waterson’s best attempt at beating Joanna was in the third. Climbing onto the back of Joanna, Waterson went for the rear-naked choke with about a minute left. Joanna was able to fight out several times, however, and any momentum Michelle had was gone.

Waterson gets the back and has the former champ in trouble! #UFCTampa pic.twitter.com/HR4znu3G5p

Joanna landed a few takedowns of her own, rare for the star with four wins via knockout. Even a last-second attempt at a submission win by Waterson was thwarted, and even if she was smiling on the outside, there was heartbreak on the inside.

In total, Joanna landed 180 significant strikes and out-struck Waterson 226 to 71. That 180 was only the third-best in her MMA career.

"Even if the person is losing the fight, they're not a loser. They're a winner."@JoannaMMA post-fight speech ❤️ #UFCTampa pic.twitter.com/kHR07Fn3bE

On a three-fight win streak before this fight, Waterson was oh so close to a title opportunity. She now heads back to the drawing board. Joanna, who lost the right to fight for the title after losing to Rose Namajunas twice, is back on track.

While a clash with Weili Zhang is bound to happen (the champion herself has wanted this bout for a while), is this the fight to make right now? There is an opportunity for Joanna to face Tatiana Suarez (ranked number three in the UFC rankings) or the former champion in Jessica Andrade. It is possible, but Joanna is adamant about fighting for the title. The next few months of UFC matchmaking should be fascinating.

Once unsure of her future, the Boogeywoman appeared stronger than ever before. Her rise back to her former glory has been fascinating to watch, and knowing Joanna, she’s just getting started.