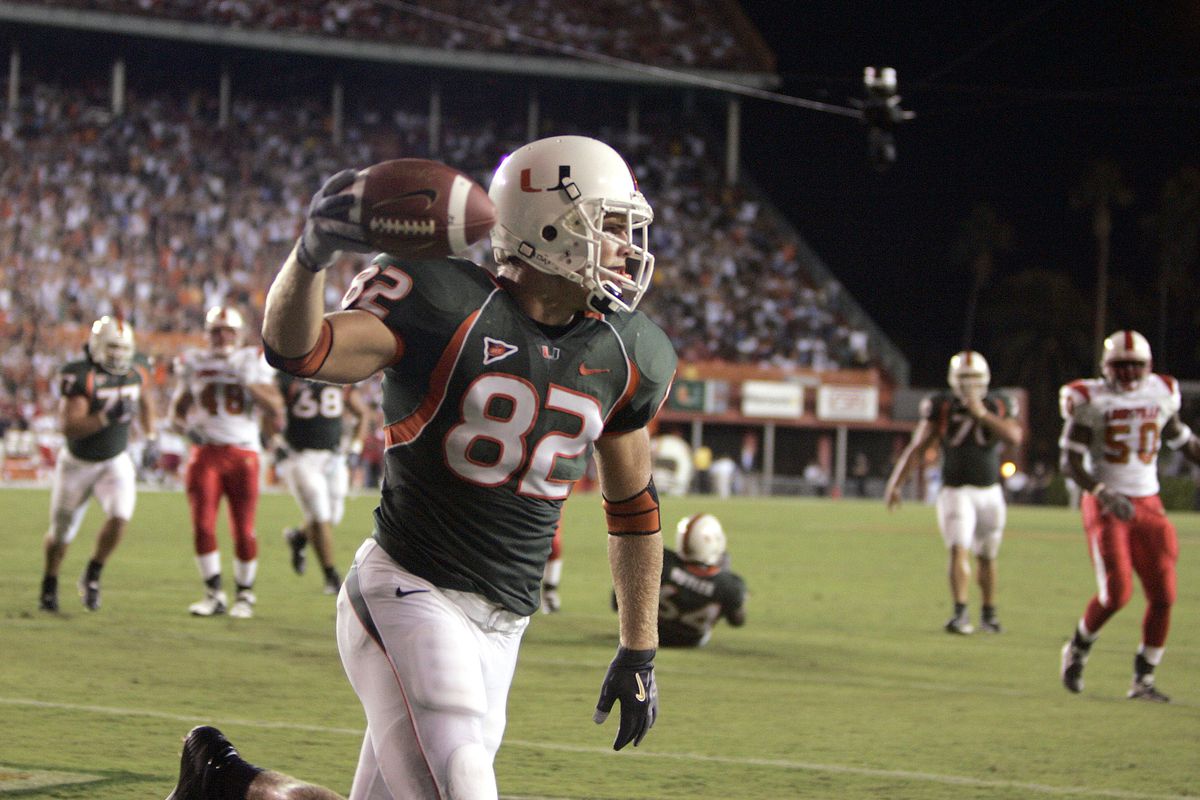 Miami’s first season as a member of the ACC featured its fair share of nail-biters as the Hurricanes played five games decided by a touchdown or less. During the 2004 season, Miami managed two fourth-quarter comebacks, including one on this day 15 years ago.

Miami scored first on a 9-yard touchdown pass from Brock Berlin to tight end Greg Olsen, but before the Hurricanes could blink, they were on the short end of a 24-7 halftime score. Louisville quarterback Stefan LeFors passed for two first-half touchdowns and three on the evening.

After Miami cut the lead to 10, LeFors’ third touchdown of the night and second to Tiger Jones pushed the Cardinals’ lead to 31-14 midway through the third quarter. Berlin and the Hurricanes answered with a 14-yard touchdown pass to Roscoe Parrish late in the third quarter. A pair of field goals by Jon Peattie early in the fourth made it 31-27 with more than 12 minutes to play.

The Miami defense had settled in, but the first lead of the second half came on an electrifying 78-yard punt return for a touchdown by Devin Hester. With 8:11 to play, the Cardinals trailed 34-31, but there was no panic on the Louisville sideline.

With freshman Brian Brohm under center, Louisville marched 80 yards in nine plays to regain the lead as Lionel Gates’ third touchdown put the Cardinals in front 38-34 with less than five minutes to play. A big return from Hester set Miami up with good field position, but with less than two minutes to go, the contest hung in the balance.

Facing a 4th-and-4 from the Louisville 8-yard-line, Berlin kept Miami alive with a 5-yard completion to Darnell Jenkins. Two plays later, Frank Gore was in the end zone and the Hurricanes had regained the lead with 53 seconds remaining.

On the final drive of the game, Brohm completed a fourth down pass to Montrell Jones to move the Cardinals to near midfield, but they would get no closer. On the game’s final play, the freshman was intercepted by Antrel Rolle to seal the Miami comeback.

Miami was 5-0, but would drop three of its next six games before topping Florida in the Peach Bowl. The Cardinals finished the year 11-1, as Conference USA champions, with a 44-40 Liberty Bowl win over Boise State and No. 6 in the final AP Poll. The loss would serve as the only blemish for Louisville during the 2004 season and it happened 15 years ago today.