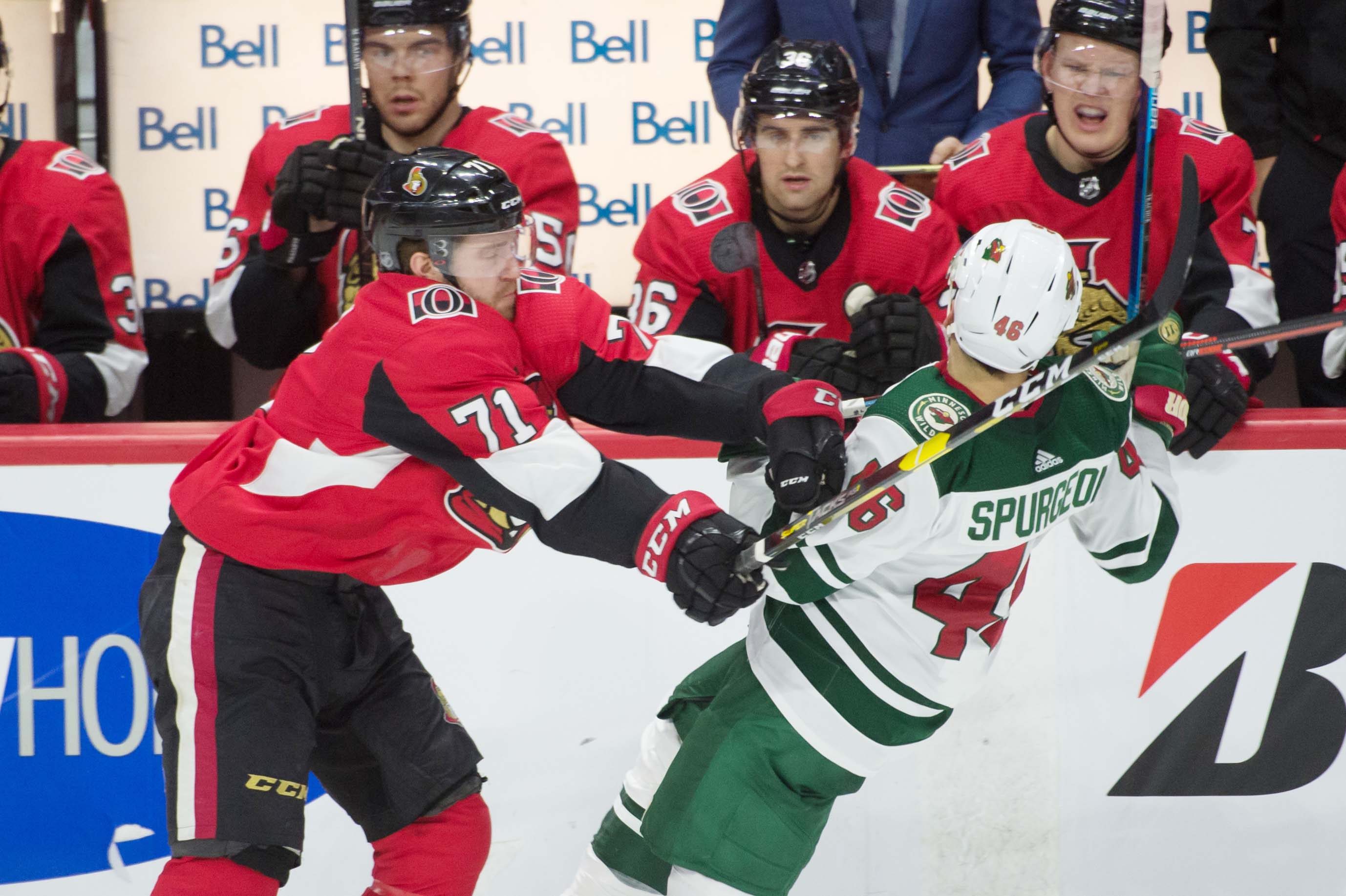 The weather is certainly starting to feel more like winter.  That crisp feeling from the wind hitting you in the face is a clear indicator of that.  I am also sure the Minnesota Wild are feeling the growing weight of pressure to do something to end their 4-game losing streak (and counting) as they start a 3-game Canadian road trip with today’s game in Ottawa.

Ottawa isn’t exactly off to a fast start, but many expected them to struggle this season with a new coach and a team made up of lots of young players.  The Wild are kind of the opposite, as one of the oldest teams in the league and a club that seems to be showing its age and not in a good way.  Can the Wild start the road trip with a win or will the pressure to win continue to build after another loss?

1st Period Thoughts: This is a weird time of day to be writing about a game. Noon on a Monday, just throws me off. Now I’m fortunate that Mondays are one of my normal days off, but noon is just weird. But then I have to remind myself that it’s a national holiday in Canada. Of course, if we were playing the Islanders today, we’d be playing an early game as they always play Columbus Day games early as well. Well this could end up being a pretty boring game on both sides, as both are teams known for playing a dump the puck kind of game. There is a possibility though that the Wild might take fewer penalties on this road trip, as Mats Zucarello is out with a lower body injury. But even with that, not much really seems to be different. Five minutes into the game, and it feels like all the action is by the Senators. Thankfully though, is that they’re not really able to put up much as far as offense goes. The most pressure by the Wild in the first half of the period would come from the likes of Jordan Greenway and Luke Kunin. Considering what they’re paid compared to the likes of those on the top lines, something just feels wrong there. The Minnesota Wild would get the first shot at the power play, after Vladislav Namestnikov was called for tripping Zach Parise. For as bad as the Wild are, for them to have the power play and penalty kill that they do have is mind-boggling at times. But like many things with this team, nothing would come to fruition on this power play, mostly because the Senators were super aggressive on their penalty kill. Just after killing the penalty, Alex Stalock almost gave up a juicy goal, but was bailed out by his defensemen. Again, it feels like it’s the Wild’s defensemen that are putting on the biggest push for scoring. While the defensemen are trying, they’re not getting much of a screen in front of Craig Anderson from the Wild’s forwards. While there’s definitely an injury risk to act as a screen, we need people who are willing to block the sight lines of the opposing goaltenders. Part of me wants to say that today’s Minnesota Wild looks much better than what we’ve seen so far this season, but then I have to remember that today’s opponent is far from impressive. This has been a good opening period, but I have to temper that feeling as there are two more periods to go. Minnesota would end the period on the power play again, after Erik Brannstrom was called for interference. The period would end scoreless and the Wild can start the second period with a decent amount of power play time remaining.

2nd Period Thoughts: Despite nice zone time after the starting puck drop, the Wild would spend too much time in their own zone, whilst being the team on the actual power play. That’s not what this team needs to be doing right now. The Senators would successfully kill the penalty, and shortly after would draw their own penalty as well. Joel Ericksson Ek would head to the penalty box for holding. The Senators have yet to score a power play goal this season. The Wild’s penalty kill has been decent so far this season, but in this first penalty kill of the game, it looks disorganized and uncertain. Struggling to clear the zone, multiple times. While Minnesota would kill the penalty, I would say they were lucky that they did. So far, this period has felt like a step down from the first period. The Senators would take back-to-back icings near the midpoint of the period, but the Wild were unable to convert Ottawa’s tired skaters into a goal. Kunin would get a nice shot on goal which would turn into a power play for the goal. After the shot by Kunin and stop by Anderson, Chris Tierney would slash Marcu Foligno and then Bobby Ryan and Kunin would take roughing minors. The power play would be short lived, as Kevin Fiala would get called for hooking. With the more open 4-on-4 ice, not much would come of it for either team. Minnesota would get close to breaking the ice with a great break away attempt by Jason Zucker, however Anderson would come up big. Especially since Zucker’s skate came up and hit Anderson in the mask (thankfully not on his unprotected neck). Zucker would draw a penalty, as Thomas Chabot would get called for hooking, which is what brought Zucker down and his skate in Anderson’s face. The best scoring chance at the mid way point of the power play would come from Parise, but it would ring (loudly) off the pipes. Minnesota would head back to the power play after Tyler Ennis was called for interference. This would be the Wild’s fifth power play, and eventually they need to do something with the man advantage. Near the end of the power play, the Senators would get some excellent short-handed scoring chances. Thankfully Stalock was able to keep the pucks out of the net. With less than a minute remaining, Kunin would get called for slashing. On the initial puck drop after the penalty, the Wild would struggle at clearing the puck. I’m just glad this period would end 0-0.

3rd Period Thoughts: Of course the Wild would start the period on the penalty kill. My hope is that the penalty kill looks better than the others have so far. In the first minute, Minnesota definitely did a better job at clearing the puck as well as clock management in an effort to kill the penalty. After that kill, the Wild went on an offensive push, putting Anderson to work at protecting his goal. The Wild would go back to the power play, as Brannstrom would get called for hooking. Watching this power play just has me shaking my head at how successful they’ve been with the man advantage this season. It just doesn’t make much sense. There was a point where the puck landed on Mikko Koivu’s stick and there were no other skaters around him and he had a clear look at the net. Instead of taking a shot he decided to pass. There is a time and place for passing, but that was not the time or place. Minnesota would go back to the penalty kill after Foligno was called for boarding. In the early moments of this kill, the Wild are feeling more aggressive on the kill, especially in clearing the zone. That aggressiveness turned into zone time. For all the grief we give him, Victor Rask would end the stalemate after hard work by Jordan Greenway along the boards. With four and a half minutes remaining, Ottawa would head back to the power play after Kunin was called for hooking. Hopefully, we see the aggressive penalty kill like we saw for the last one. Early in the kill, Minnesota was forcing Ottawa to make tough passes along the blue line which the Wild were able to intercept and punch back into the neutral zone. In the last moments of the power play, Ottawa would pull Anderson for a 6-on-4. Minnesota would kill the remaining penalty. Minnesota would add a nail to the coffin with an empty net goal by Parise. The Senators would keep Anderson pulled until Ottawa played the puck with a high stick. As soon as they could, Anderson would return to the Senators bench. Today would get the Wild in the win column for the first time this season and earn Alex Stalock a shutout.

RW – Nick Swaney (Minnesota-Duluth, NCHC) ~ the junior forward had the game winning goal and 4 shots in the Bulldogs’ 2-1 win over UMass-Lowell as they split their weekend series with the Riverhawks.  Swaney has a goal, 2 PIM’s and is a -1 in 2 games.