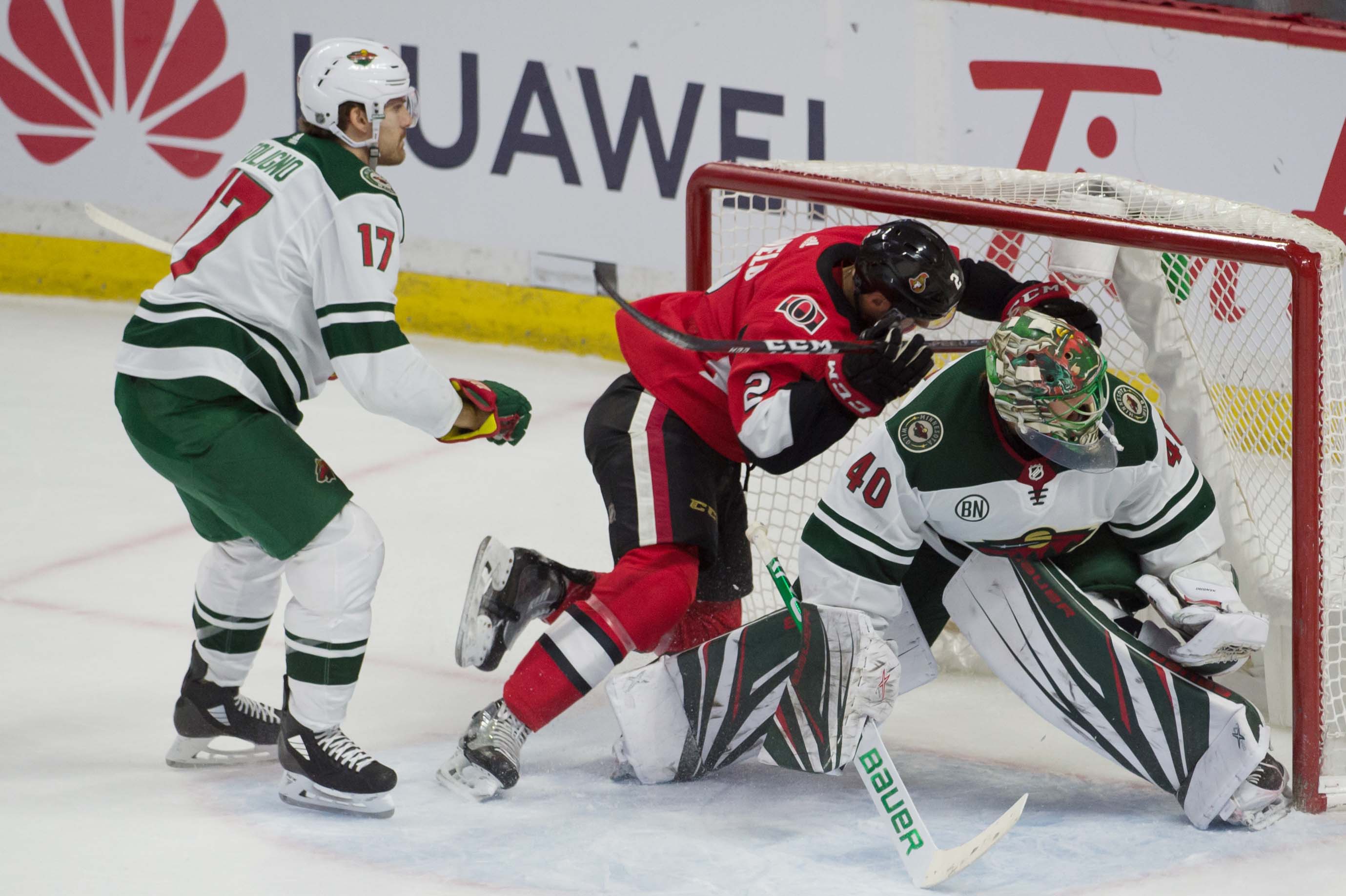 During Saturday’s home opener in St. Paul, the Minnesota Wild players were announced to a pretty muted reception from the sellout crowd.  Other than a few token times, as the players’ names were announced could you hear a half-hearted cheer from from the fans.  That chilly reception is a sign that while the fans support the team, they’re not too excited about its chances this season.  An 0-4 start and the first regulation home-opening loss will do that to you.

After an ugly 7-4 loss to Pittsburgh, the Wild are playing a matinee game on Monday as part of the NHL’s strange ‘Columbus Day’ lineup of games.  I am surprised anyone celebrates this as a holiday anymore and are there really that many people available to watch the games?  Either way, the Wild have not fared well in matinee games and can only imagine it will be even tougher for them to be focused with the pressure of being the only team in the NHL not to have registered a single point this season.

Scoring has been the Wild’s biggest issue so far, especially up front where the forwards have only accounted for only 5 goals through 4 games this season.  Youngsters Jordan Greenway, Ryan Donato and the Wild’s most notable free agent pick up from the summer Mats Zuccarello have yet to register a point this season.  Perhaps because of this, the Wild chose to call up the Iowa Wild’s leading scorer Gerald Mayhew to the big club.  Many felt Mayhew’s solid performances during pre-season should have earned him a spot on the roster out of training camp.  All Mayhew did was handle his demotion to Iowa with class and register 3 goals and 6 points in 3 games.  So hopefully he can provide a spark from the Wild’s 4th line.  So will #GerryTime’s arrival in Minnesota yield some more goals?  Wild General Manager Bill Guerin is certainly hoping so.

In the meantime, that has meant Wild Head Coach Bruce Boudreau is back to juggling lines.  It is a practice that has had some veteran players, most notably alternate captain Zach Parise grumbling over all of the shuffling.  While I understand the concern of some players over the challenge of developing chemistry, if the players want to keep a line together the best bet is to work hard and make something positive happen on the ice.  To simply go through the motions and just wait to be comfortable only will encourage Boudreau to keep searching for lines that provide energy and offense.  He recently quipped after Sunday’s practice.

“You know what, I hate, and people may not believe this, but I hate changing the lines up. I really do. I hate coming to work everyday and thinking what’s going to work and what’s not going to work.” ~ Wild Head Coach Bruce Boudreau

I kind of read this as subtle shot towards the players who are tired of the line juggling.  More or less without saying, he wished the players were working hard enough so he didn’t feel compelled to juggle the lines after each game.

Yet, as miserable as Minnesota’s offense has been its defensive zone coverage has been suspect as well.  Players relaxing a bit on the backcheck has allowed opposing forwards to get loose and create odd-man chances in the offensive zone.  Devan Dubnyk hasn’t helped his cause by giving up juicy rebounds that yield quality second-chance scoring opportunities that all too often end up in the back of the net.  With a back-to-back between today’s game in Ottawa and Toronto tomorrow it is likely that Alex Stalock will get the start for one of these games and if I had to guess it will be against the Senators.  The Wild must tighten things up defensively if they want to have any chance at all as they are ill-equipped to play in a ‘track meet’ style of game of trading goals.

Ottawa is coming off a solid victory over last year’s President’s Trophy winners, the Tampa Bay Lightning on Saturday.  The Senators are a young squad and scoring from the forwards have not been a problem for Ottawa as they have 11 goals spread out among 10 different players.  Veterans Bobby Ryan, Jean-Gabriel Pageau and Vladimir Namestnikov lead a group that has speed shiftiness with youngsters like Vitali Abramov and sandpaper in Brady Tkachuk.

Defensively the Senators are also youthful with the offensively gifted Thomas Chabot leading the way along with 16-year NHL veterans Ron Hainsey and hitting machine Mark Borowiecki.  Chabot likes the handle the puck and plays a high-risk, high-reward style of game.  Rookie Erik Brannstrom acquired via the Mark Stone trade with the Vegas Golden Knights is still learning the ropes but he’s another skilled puck mover on a fairly mobile defense corps.

Between the pipes, the Senators continue to soldier on with Craig Anderson.  The Senators’ defense is a bit undersized as a group and can struggle in the physical battles near the crease.  That means Anderson doesn’t always get a lot of defensive support which is a reason big reason why the Senators have been a bottom dweller the last few seasons.

Keys To A Wild Victory

1.  Shoot the puck – I know it sounds cliche, but the Wild need to keep shooting the puck whenever the opportunities present themselves.  If Minnesota is going to turn its offensive woes around, it needs to keep sending shots on goal and good things will happen.  The worst thing they could do is to be picky and start trying to set up the ‘perfect shot.’

2.  Get the first goal – This might be asking a lot, but often times it is tough to have confidence if you are always chasing the game.  The last few games, the Wild have tried to catch up, only to have the wheels come off.  It would be nice to take that pressure off the shoulders of a team that is already probably feeling the weight of expectation these days.

3.  Free Gerry – Gerald Mayhew is the ultimate underdog.  The Wyandotte, Michigan-native was an undrafted free agent out of Ferris State.  Ever since he signed on with the Minnesota Wild, he’s been a ball of energy and clutch scoring with the farm team in Iowa.  The Wild would be wise to embrace it and give him every chance to succeed.  Who knows, he might be just the one to reward you.  Honestly, what do they have to lose by giving him a chance?

What do you think is important for the Wild to earn a victory this afternoon?  Tell us on Twitter @CreaseAndAssist or in the comment section below.