MLS Playoffs preview: First-round predictions for who will advance 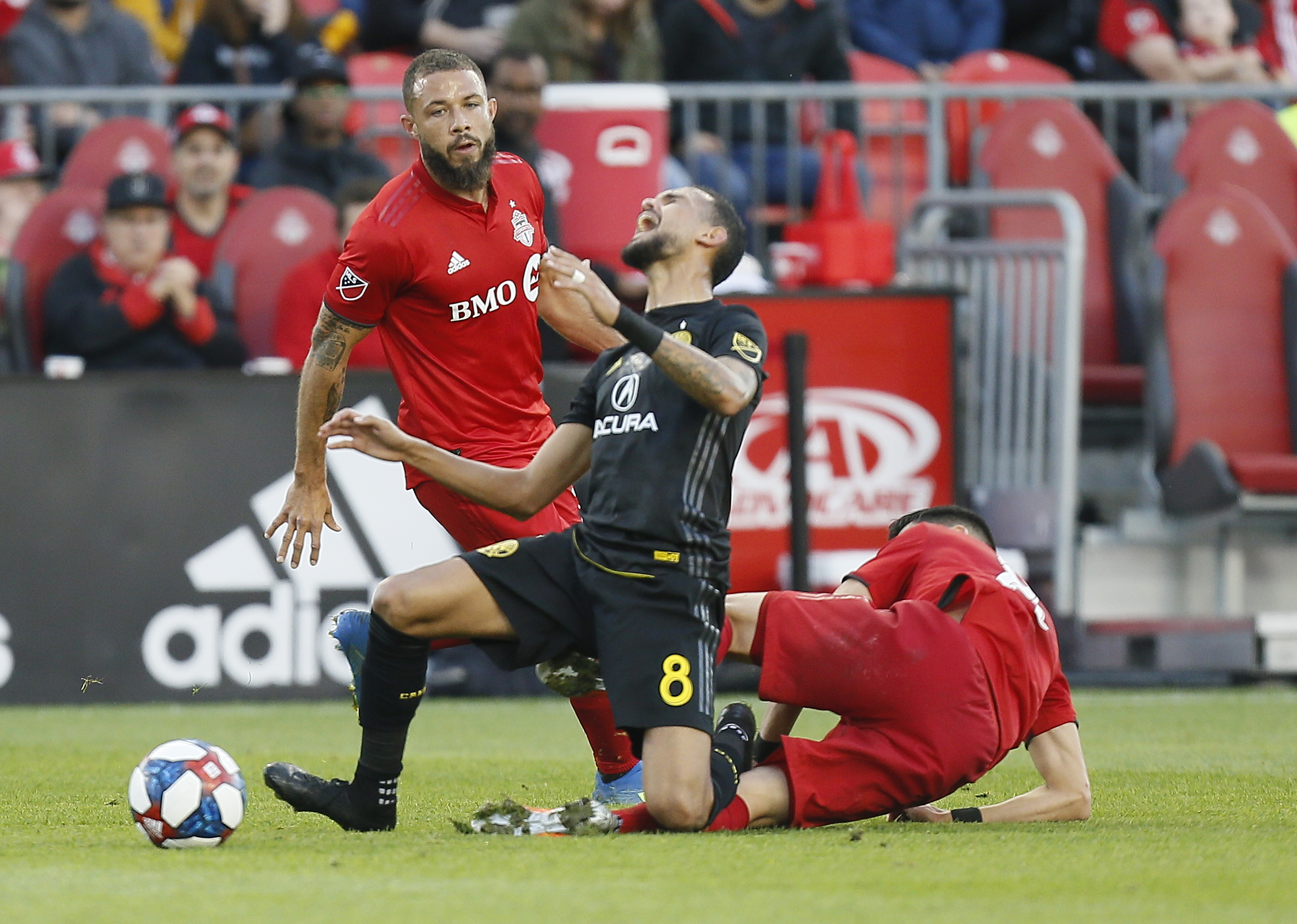 MLS Playoffs preview: First-round predictions for who will advance

The MLS Cup Playoffs are set to begin this weekend, and there will be a brand-new format replacing the previous home-and-away matches. Beginning this year, it’s only one game per round — win and move on, or lose or go home. This would seem to offer a home-field advantage to the teams that ended the season higher up the table that didn’t exist in the past.  Since 2011, when MLS first introduced knockout matches in the postseason, the higher-seeded teams had an advancement rate of 67 percent.

This season, it’s all knockout games straight up to (and including) MLS Cup. Here’s our Round 1 preview and predictions:

Atlanta United (2) vs New England Revolution (7) – While Atlanta began their season slowly under new manager Frank de Boer, they have only lost two games out of 17 at home, while the Revs have won but three away matches all season. These two teams played each other on Decision Day, with home team Atlanta beating New England 3-1. United also beat the Revs in Foxboro 2-0 back in April.   But the Revolution have improved since the arrival of manager Bruce Arena, earning 34 points in 21 matches after a horrendous start to the season. They are led by Spanish striker Carles Gil and Argentinian midfielder Gustavo Bo, who have combined for 19 team goals. Atlanta is looking to repeat as MLS champions, finishing behind NYC FC in the Eastern Conference. If goal-scorer Josef Martinez remains healthy, look for Atlanta United to advance to the next round of play by beating New England 2-1.

Philadelphia Union (3) vs New York Red Bulls (6) – With the Union and Red Bulls splitting their two games in 2019, this game figures to be a close affair.  The Union have had a rough couple of seasons entering this campaign, but manager Jim Curtin seems to have found the team’s mojo in 2019. Although they lost to the Red Bulls in an away match in September 2-0, they also tied LAFC and beat both Atlanta and DC at home in the preceding games. The Red Bulls have played inconsistently in 2019, losing a critical game on Decision Day to the minnow Montreal Impact 3-0.  No longer reliant on the aging Bradley Wright-Phillips for goals, they have turned to midfielders Daniel Royer and Brian White, who have responded with a combined 20 goals in MLS play this season. The Red Bulls will look to their defense to keep the game close, depending on 2018 Defender of the Year Aaron Long alongside Tim Parker and veteran goalkeeper Luis Robles to have solid performances. This match screams upset, with the Red Bulls advancing via a 2-0 win at Talen Energy Stadium.

Toronto FC (4) vs D.C. United (5) – The regular season saw these teams share the points in their two matches, with a scoreless draw in Toronto and a 1-1 tie in D.C. With these two evenly matched teams level on points and separated only by a tiebreaker at the end of the season, Toronto secured home field advantage with United dropping points despite having a two-man advantage against last place Cincinnati at Audi Field on Decision Day. With their star player Wayne Rooney set to return to England at the end of the season, look for the midfielder to give his all in the post-season. But the man who has consistently kept DCU competitive this season is goalkeeper Bill Hamid, a former youth academy player and currently on loan from FC Midtjylland in Denmark. For United to advance, they will need a solid performance by Hamid to have any chance to advance. For Toronto, with Sabastian Giovinco being sold to Al-Hilal in Saudi Arabia, the goalscoring responsibilities now belong to forwards Jozy Altidore and Alejandro Pozuelo, who have each netted 11 times for Toronto this season. They also rely on the veteran leadership of midfielder Michael Bradley, who is in the final year of his contract and will want to go out with a title win. Much will depend on the health of Altidore, who is currently nursing a calf injury but is expected to play against United.  Look for the match to be close throughout, with a late Altidore goal seeing Toronto through to the next round of play via a 2-1 win.

Seattle Sounders (2) vs FC Dallas (7) – The Sounders have won 11 games at home while Dallas has managed only three road wins in their respective 2019 campaigns, and only once in Seattle out of 12 matches historically (the win coming in 2011). Seattle is powered by Uruguayan midfielder Nicolas Lodeiro, who has 7 goals and 12 assists in 27 games in 2019.  His playmaking is vital to strikers Raul Ruidiaz and Jordan Morris up front, who combined for 21 goals in the 2019 campaign. The Sounders’ defense has improved following the unexpected retirement of Chad Marshall and the long-term suspension of Panamanian Roman Torres for using performance-enhancing drugs. For FC Dallas, who secured the final playoff spot by thrashing Sporting KC 6-0 on Decision Day, they rely on Colombian playmaker Michael Barrios, who ended his 2019 campaign with 13 assists. While none of their players had double-digit goals totals, they rely heavily on their former youth academy players and the solid goalkeeping of Jesse Gonzales to keep the matches close.  Head man Luchi Gonzales has done a fine job with a young Dallas squad in 2019, but the Sounders’ veteran play and home crowd will be too much for Dallas to overcome. Look for Seattle to advance to the next round with a 3-1 win.

Real Salt Lake (3) vs Portland Timbers (6) – Home field might not be as big of an advantage in this game, since Portland’s road record is 6W-8L-3D.  The Timbers swept RSL during the regular season, including a 2-1 win in Rio Tinto. With former manager Mike Petke fired for hurling anti-gay comments at a referee on August 11th, Freddy Juarez took the reigns of RSL and is the only interim manager of all the teams in the playoffs. Finishing up impressively in 3rd place in the Western Conference, RSL is anchored in goal by veteran Nick Rimando, who has announced his retirement at the end of the current season. Their goalscoring is evenly distributed between midfielders Albert Rusnak and Jefferson Savarino, along with Liberian striker Sam Johnson.  At age 37, team captain and former U.S. international Kyle Beckerman provides veteran support in the midfield. For Portland, they finished just four points behind RSL, while beating them twice. Led by fiery Venezuelan and former New York Cosmos manager Giovanni Savarese, they have a strong midfield with veterans Diego Chara and Diego Valeri, who will try to feed the ball up front to Jeremy Ebobisse.  A major loss for the Timbers is striker Brian Fernandez, who has entered the MLS drug treatment program and will be out indefinitely. But along with Sabastian Blanco, the Timbers can score goals, and will do just that against RSL and advancing to the next round by a score of 3-2.

Minnesota United (4) vs LA Galaxy (5) – Minnesota will look to parlay their home field advantage at Allianz Field into a win, having lost just once there in 2019.  The Galaxy’s road record is 5W-10L-2D, but these two teams haven’t played each other since April. United were gifted the final home spot courtesy of the Houston Dynamo’s unexpected 4-2 thrashing of the Galaxy on Decision Day, with the two teams only separated by two points in the table at the end of the regular season.  The Loons are led by Colombian midfielder Darwin Quintero, who plays a withdrawn forward position and scored 10 goals in 29 matches. He is supported in the midfield by Jan Gregus, who tallied 11 assists. Their target man up front is Ethan Finley, who netted seven times for United. Veteran Ike Opara anchors the defense, supported by Michael Boxall and Romain Metanire.  Italian goalkeeper Vito Mannone is more than capable in goal, having spent almost a decade plying his trade in the English Premier League and the Championship Division in England. Manager Adrian Heath is in his third season with the club and has seen them advance in the table each season. As far as the Galaxy, well, it’s all about Ibrahimovic, who has scored 29 goals in the regular MLS season and three more than the rest of team combined.  With a statue of him just erected in his native Malmo, Sweden, Ibra is literally a larger than life player who backs up his bravado with on-field statistics. While he is amazing to watch, at age 38, this will likely be his MLS swan song, so expect him to give his all to win the MLS cup. The Galaxy’s problem, however, is their defense. LA has tried to address their Achilles heel by adding loaned Boca Juniors defender Cristian Pavon, but that might not be enough. The rest of LA’s defense is pedestrian, and goalkeeper David Bingham is a mediocre goalkeeper at best.  The match against the Houston Dynamo, for example, saw the Galaxy lead 1-0 and 2-1 in the match, only to have their defense cede three late goals and jettison LA to fifth place. And while no one would doubt that Ibra will have his moments against the Loons, soccer is a team game, and Ibra and Company will find themselves on the short end of a 4-3 match that ends the Galaxy’s season.