Fan confidence in Eagles heading to Dallas: shaken and stirred 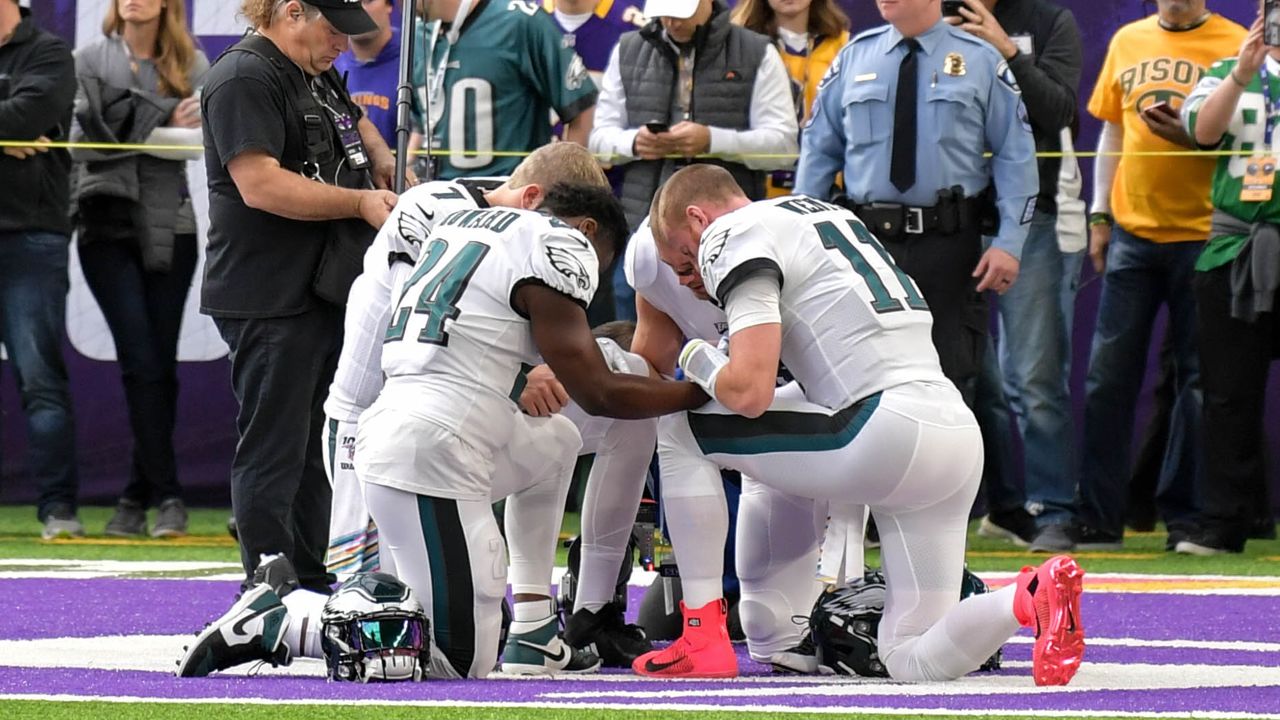 Fan confidence in Eagles heading to Dallas: shaken and stirred

It’s a weird mixture of “Trouble in Paradise” and “The Longest Yard” among Philly fans’ mindsets worldwide at the moment. Half of us are frustrated with the obvious coverage problems on defense, the constant injury concerns and the slow starts on offense which have plagued game plans. The other half of Eagles nation says it’s still early, things will get fixed starting with the Dallas game.

The back story of it all is we were fed a steady diet of promotion by both local and national media over the summer, to wit, “This team is loaded, a legit Super Bowl contender.”

What EYE see is a flawed contender at the moment, with a chance to redefine itself as a rejuvenated challenger. But it’s going to take some difficult corrections in the way the games are coached and played. As a team every player and coach is accountable for their individual self-improvements. No one can say for certain if the Eagles can fix things in time to save a promising season, but if they do it must start this Sunday night in Dallas.

“We need to start better on offense. We need to get off the field on defense. The deep passes, the big plays, that’s what is really hurting us,” safety Malcolm Jenkins said. That sums it up simplistically, but fixing all that in one week ain’t likely.

I, like you, have ideas on what needs to improve. Problem is we’re basically stuck with the personnel we have which in some cases has been a regretful situation. Zach Brown was cut yesterday despite his fully-guaranteed contract. The linebacker was playing a ton of snaps and making a fair share of tackles, but was having some trouble on certain reads within the Schwartz system. Maybe other factors were involved, but Zach will be the poster child for needed improvement at several key defensive positions.

Trade deadline (end of October) looms, but seriously, do you expect Howie Roseman to mortgage future high draft picks on one guy who might help fix things temporarily but will be difficult to re-sign next year or the year after?  I doubt it. Besides, we need more than one superstar to fill the holes on defense Jim Schwartz has to deal with.

But give them a chance to right the ship in Dallas. You won’t hear me griping again unless they really stink things up down there.

Besides cutting Zach Brown, the Eagles made a pair of roster moves on Monday afternoon:
First, the team signed running back De’Angelo Henderson to the practice squad. Henderson was most recently with the Minnesota Vikings. A former draft pick of the Broncos, Henderson takes the spot vacated when running back Boston Scott was promoted to the active roster on Friday.

Later in the afternoon, the team waived cornerback Ryan Lewis, who played on special teams in the past two games for the Eagles.

• The Eagles will open cornerback Jalen Mills’ 21-day practice window. Mills has been on the Physically Unable to Perform list since the start of Training Camp with a foot injury. The Eagles can activate him to the active roster at any point during the practice window. If Mills fares well in practice, he could play on Sunday night in Dallas. Pederson acknowledges that even if Mills plays it wouldn’t be prudent to expect him play 100 percent of the snaps.

• Fellow cornerback Ronald Darby will return to practice this week as well. Darby has been sidelined for the past three games with a hamstring injury.

• Wide receiver DeSean Jackson is “day to day,” per Pederson, but won’t likely practice on Wednesday.

Linebacker Nigel Bradham (ankle) and tackle Jason Peters (knee) were unable to finish Sunday’s game in Minnesota. Pederson said both players are “day to day,” and that their test results are undergoing further examination.