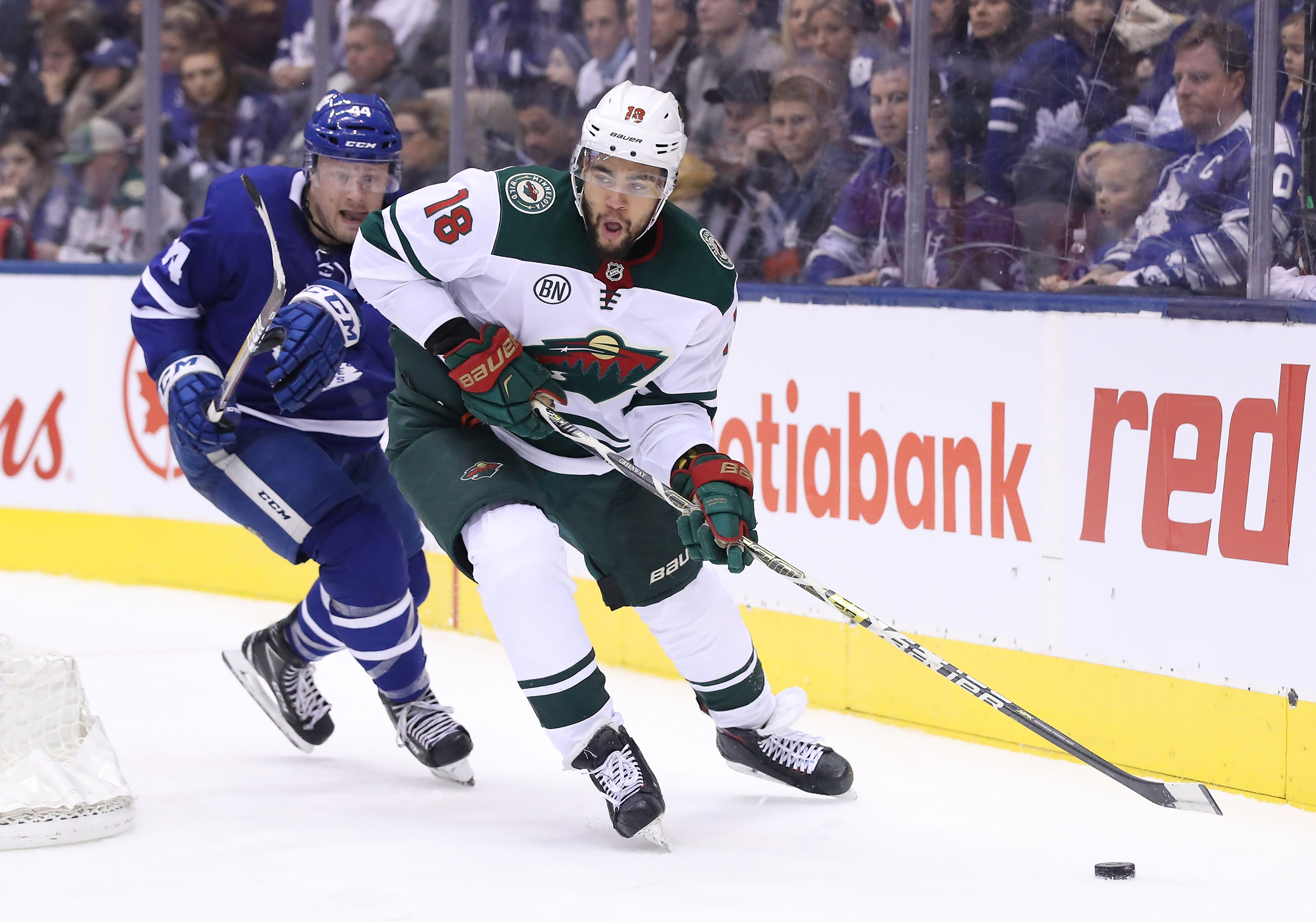 That sound you heard about 2:45PM Central time was the collective sigh of relief from the 23-man Minnesota Wild roster.  The Wild earned their first victory of the season in an ugly, boring 2-0 victory over Ottawa in front of less fans than the 11,500 fans officially listed at Canadian Tire Center.  The game in general lacked energy and Minnesota went a woeful 0-for-6 on the power play but they still got enough offense to get it done.

As good as it must have felt to get a win, they will have to re-focus and ready themselves mentally and physically for a far more rigorous challenge against Toronto tonight.  The Wild will need to dig deep to even stay competitive and demonstrate a level that so far has been elusive through their first 5 games of the 2019-20 season.

Victor Rask, the much-maligned forward is currently the Wild’s ‘hot hand’ who is scoring at a point-per-game pace with a goal and an assist in the two games he’s played in thus far.  The Wild are still waiting for its ‘usual suspects’ of veterans like Eric Staal, Mikko Koivu, Jason Zucker, Kevin Fiala and barring an empty-net goal against Ottawa you could toss Zach Parise into this list of forwards the team hopes re-discovers its scoring touch.  Will Gerald Mayhew make his NHL debut or will Wild Head Coach Bruce Boudreau be afraid to mess up the chemistry after the club’s 1st win?  I hope so, as I think he’s earned it and there are plenty of other players that are still woefully underperforming this season.  I’d even entertain the idea of scratching a player like Fiala and give Mayhew a shot on the Wild’s top 6.

PLUS/MINUS from @mnwild 2-0 win over @Senators presented by @TarpShooter:

➖Still haven’t scored on the rush

Yet at this point, the team is probably best served playing low-scoring, defensively responsible hockey.  That is easy to pledge against a less-experienced team like Ottawa, but it is quite another against one of the more dangerous offenses in the league like the Toronto Maple Leafs.  Ryan Suter, Jared Spurgeon, Jonas Brodin and Matt Dumba will no doubt have to be on their toes if the Wild are to keep Toronto’s offense at bey.  As good as Alex Stalock was against Ottawa, I’d be surprised if Devan Dubnyk doesn’t get the start.

“I don’t want to put anybody down or anything, but we’re not going to score five goals every night. We’ve got to hold teams to one or two.” ~ Bruce Boudreau

The Maple Leafs are a legit Stanley Cup contender, with at least 3 superstars up front in leading scorer Auston Matthews, creative set up men Mitch Marner (and William Nylander) as well as veteran ace John Tavares anchoring the 2nd line.  Matching up against this group will be pretty difficult for a team that doesn’t exactly have a lot of speed throughout its lineup.  Traditionally this would be the job for Koivu but I’m not sure he can keep up with the swift skating Maple Leafs.

This summer Toronto tried to augment its attack by bolstering its defense with some offensively gifted blueliners in former Avalanche defenseman Tyson Barrie being brought in as well as Cody Ceci to work along side super skilled puck mover Morgan Reilly.  Former Golden Gopher and Minnetonka Skipper Justin Holl has been a reliable farm hand with the Marlies and is finally getting a chance to show what he can do at the NHL level.

Its tough to say whether Toronto opts to put its ace, Frederik Andersen between the pipes or give Michael Hutchinson who has had a lot of experience against the Wild to give him the start.  Either way the Wild must build on whatever confidence they have gained from their victory even if they only scored once on Ottawa’s Craig Anderson yesterday.

1. Stay out of the penalty box – As important as it is for the Wild to avoid getting into a track meet, scoring-wise with Toronto they will help their cause by limiting their trips to the penalty box as much as possible.  That will mean the Wild must be prepared to hustle and move its feet so they don’t compel themselves to hook and hold and tempt fate by giving the Maple Leafs power play opportunities.

2. Shoot the puck – The Wild cannot simply sit back and just defend the entire game and expect to win.  And while Minnesota will likely be more cautious about what they do offensively, when they do get in the Toronto zone they must take their chances to send as many shots as they can and force the Maple Leafs to defend.

3. Don’t Wait – Bruce Boudreau mentioned the importance of getting the first goal and that again will be crucial if the Wild are to have a chance to win this game.  Tallying the first goal will keep the home crowd relatively quiet and allow them to focus more on playing solid team defense.

What do you think will be important in order for the Minnesota Wild to register a victory in Toronto?  Let us know on Twitter @CreaseAndAssist or in the comment section below!