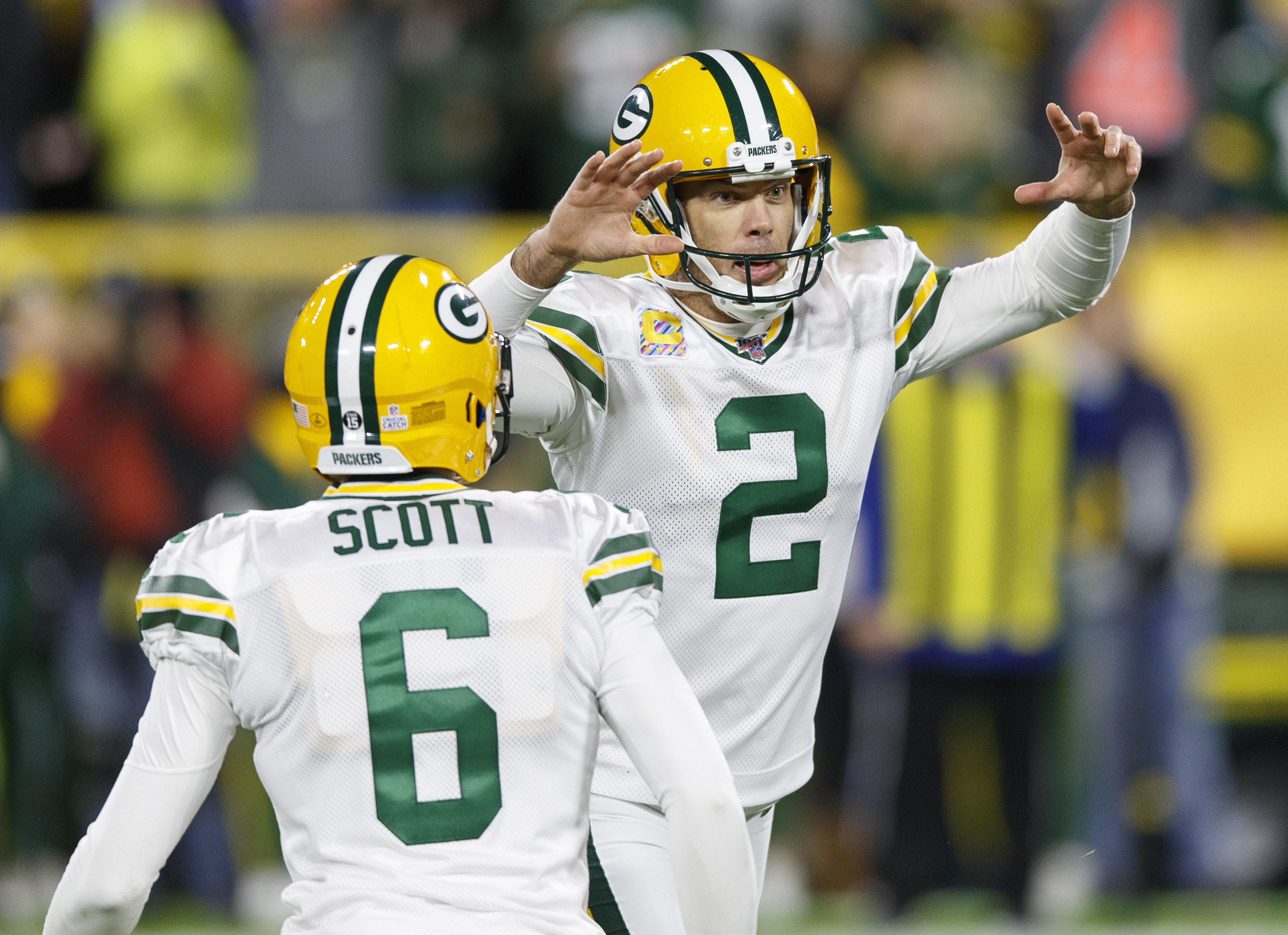 The Green Bay Packers improved their record to 5-1 with a last-second 23-22 win over the Detroit Lions. The Pack never led in this game until the final play when Mason Crosby kicked a 23-yard field to give the Packers the victory.

With the victory, Green Bay retains sole possession of first place in the NFC North. The Packers are also 3-0 in the division and have beaten each of their three division foes once this season.

Here are 10 things we learned from the Packers 23-22 win over Detroit:

1. The Packers Got Off to a Slow Start but Rebounded

The Packers weren’t ready to start this game. Detroit completed long passes on each of their first two drives and the Packers were behind 10-0 before some people even got to their seats. The defense gave up the big plays while the offense just seemed out of sync early with dropped passes and generally sloppy play.

The Packers have usually started quickly this season, which allowed their defense to concentrate on rushing the passer and gave Matt LaFleur the option to run or pass the football on offense.

To his credit, LaFleur did not abandon the run when the Packers fell behind 13-0 and they were able to get back into the game. In fact, LaFleur maintained a good balance on offense throughout most of the contest and by halftime, it was clear Green Bay was back in it. It is a credit to the Packers coaches and players that they didn’t panic after the slow start and got back into the game.

The Packers lost Marquez Valdes-Scantling early in the game and that left the Packers without their top two wideouts for most of the half. MVS returned early in the third quarter but the Pack lost Geronimo Allison on the first play of the second half to injury.

Aaron Rodgers had a lot of time to throw the football, but there weren’t a lot of open receivers downfield for most of the game. When Valdes-Scantling was out of the lineup, the Packers had four available receivers and all of them were undrafted free agents.

Allison had two drops in the first half a troubling trend that has existed for most of the season. Darrius Shepherd couldn’t field a catchable ball near the end zone, and it turned into Rodgers’ second interception of the season.

Allen Lazard finally stepped up and came up big in the fourth quarter, but the WR position is an issue that the Packers must address going forward.

3. Aaron Rodgers Came Up Big in the Clutch

Although Rodgers didn’t have open receivers for large portions of the game, he continued to find ways to move the ball downfield. The long touchdown pass to Lazard was a perfectly thrown ball that few quarterbacks could make accurately.

On the final drive, Rodgers was 5-of-6 and ate up the final 6:46 off the clock to lead the Packers to the winning field goal. He also scrambled for a key first down. The final drive covered 77 yards in 14 plays.

The veteran quarterback realized that Lazard was getting open and gaining confidence, so he went back to him three times on the final drive while also mixing in several runs and passes to Valdes-Scantling and Jimmy Graham.

Rodgers got the job done when it counted most and played great situational football.

When Aaron Jones got off to a rough start which included a costly fumble and dropping a sure touchdown pass, the Packers went to Jamaal Williams who came through and gained 104 yards rushing on 14 carries. The big run was a 45-yard scamper that helped the Packers pick up some key points before the half. Williams also caught four passes for another 32 yards and a touchdown.

Williams is a valuable player for the Packers and having both he and Jones available is a big asset for the running game. The Packers were able to keep the Lions off-balance a bit by switching up between the backs and both were effective overall. Williams averaged 7.4-yards per attempt while Jones averaged 4.3.

As a team, the Packers gained 170 yards on the ground and that includes two kneel downs by Rodgers to kill the clock before Crosby kicked the winning field goal.

5. The Defense Made Several Key Stops

Few NFL teams win games when the turnover differential is minus-three. The reason the Packers were able to do that against Detroit was that the defense came up big when it mattered most and held Detroit to just one touchdown in this game.

Matt Prater kicked five field goals for the Lions including a pair from more than 50 yards out. If the Green Bay defense allowed any one of those five drives to end in touchdowns instead of field goals, the game would have been out of reach several times over.

The Lions had big plays early but managed to convert only one drive into six points. Every time the offense or the special teams turned the ball over and gave Detroit a short field, the defense held and kept the Packers in the game. That allowed Rodgers to win it with two big drives late in the fourth quarter.

6. Dean Lowry Was Great Against the Run

Dean Lowry was the Packers best run defender tonight, making five total tackles and helping the defense bottle up the Detroit running game. Lowry made at least three tackles at or near the line of scrimmage and did not allow the Lions to move the ball up the middle consistently.

Detroit managed to gain only 56 yards rushing on 20 attempts for the game with top back Kerryon Johnson limited to 34 yards on 13 carries for a 2.6-yard average.

With the early lead, it’s surprising the Lions didn’t run the ball more often, but Lowry, Blake Martinez and Kenny Clark helped limit the effectiveness of the Detroit rushing attack and forced them to be more one-dimensional.

7. The Officiating Was Terrible

There were several questionable calls out there tonight that cut both ways in this game but at best the officiating was poor.

Officials are now getting into the habit of calling plays touchdowns on the field when in doubt because it triggers an automatic review without requiring a challenge from either coach. But it also means that unless there is “clear and convincing” evidence that the play was not a touchdown, the call will “stand.”

It was never clear that Kerryon Johnson crossed the goal line on his touchdown run and no replay that was shown on TV had a clear angle of the ball, so the score counted.

The Packers also benefitted from two questionable calls against Detroit’s Trey Flowers who was flagged twice for illegal hands to the face. The second penalty gave Green Bay a key first down and allowed them to run out the remainder of the clock and kick the winning field goal.

At the end of the day, the officiating has been an issue league-wide and the NFL needs to do something to address it going forward.

It was great to see Packers kicker Mason Crosby kick three field goals including the game-winning kick as time expired. Last year, Crosby missed four field goals and an extra point indoors at Detroit and the Packers lost by eight points despite dominating the game statistically.

Crosby came through today for the Packers and jumped into the stands for a special Lambeau Leap to celebrate with the fans after the game.

The fact that Crosby’s wife is fighting cancer only makes the moment more poignant for the kicker and his family.

The Smiths came up big again. Preston had 1.5 sacks and six total tackles while Za’Darius finished with one sack and seven total tackles.

In addition to pressuring the quarterback consistently, the Smiths have added attitude and cohesion to this Green Bay defense. You can see the players are having fun out there and much of that stems from the attitude the two big free agent signings have added to the locker room. The Smiths continue to be difference-makers on defense.

10. Darrius Shepherd Struggled Out There

Rookie wide receiver Darrius Shepherd had a rough game for the Packers. He caught only one pass for one yard and had a few key drops including one pass that bounced off his helmet and was intercepted to end a Green Bay drive.

Shepherd also fumbled away one punt return and finished the game with one return for minus-nine yards. On kick returns, Shepherd looked tentative after the fumble and averaged only 17.4 yards on his five tries.

The North Dakota State alum was a feel-good story this summer, earning a berth on the roster after having to try out just to be invited to training camp. The Packers hope he can bounce back from this poor performance and regain his confidence.