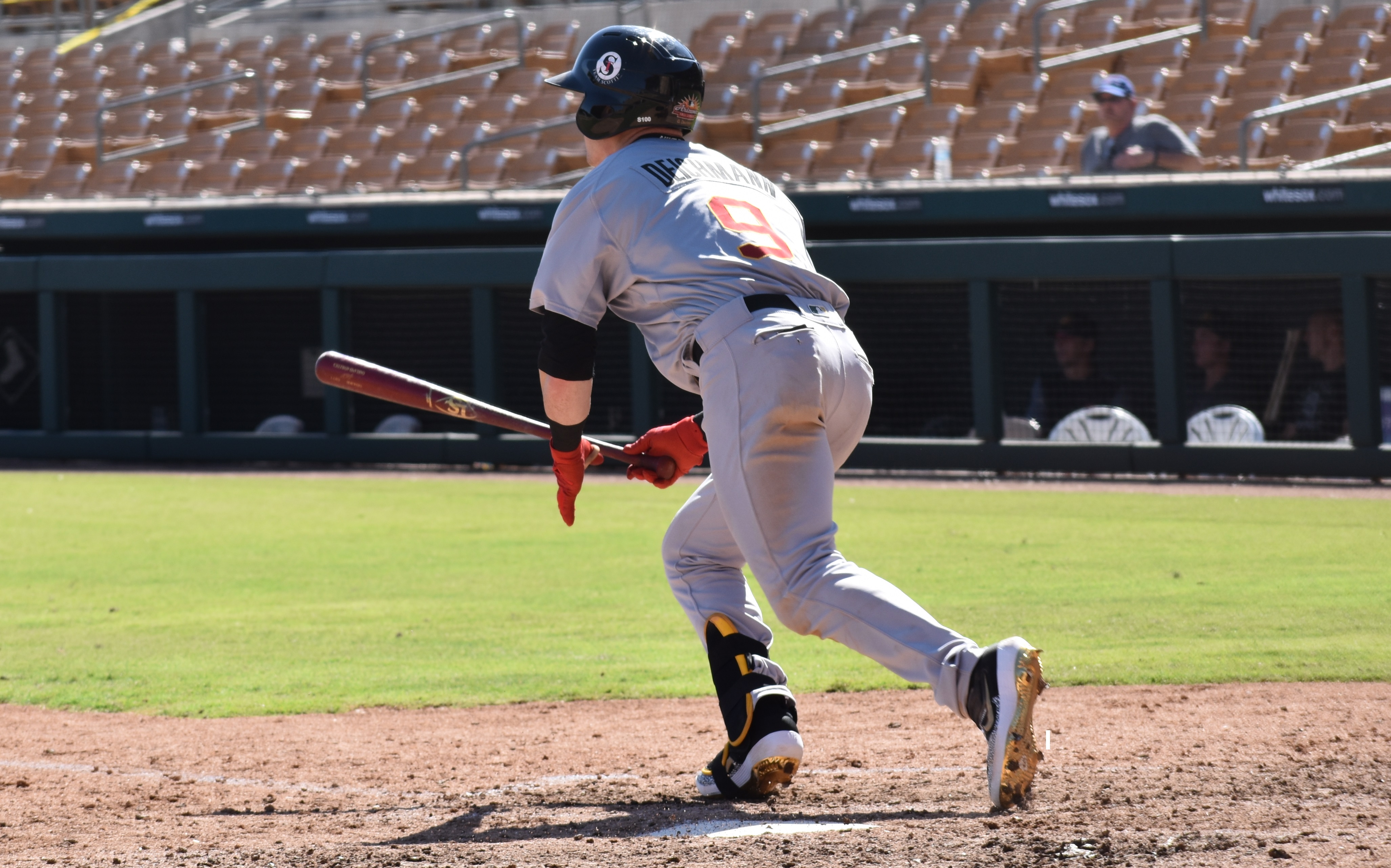 Following an off day Monday, the Solar Sox began their fourth week in action with a pair of games against the Saguaros. On Tuesday, they hit the road for their second straight game in Peoria as Anthony Castro took on Sterling Sharp. While Castro was sharp himself last time out, things looked a little duller this time around as the Tigers starter allowed three runs in 2.1 innings before getting the early hook. Jonathan Teaney (CLE), Alex Lange (DET) and Jesus Zambrano (OAK) did manage to finish out the final 3.1 innings without further runs, but it wouldn’t be enough to win.

Offensively, the Sox had just four hits, but one was a mammoth home run by DH Nolan Jones who continues to make up for his slow start. The rosters for the Fall Stars game were also announced this day and Jones was selected as a vote in option. Jo Adell (LAA), Miguel Amaya (CHC), Argenis Angulo (CLE), Castro, Greg Deichmann (OAK), Brandon Marsh (LAA), Isaac Mattson (LAA) and Jordan Minch (CHC) were all selected to represent Mesa on the East Fall Stars team with Jones joining them after winning the fan vote on Thursday.

Wednesday’s game against the Saguaros was much more highly contested, and featured a couple more great games by the soon to be fall stars and a very poor one as well. Starting with the positive, Deichmann had three hits including his sixth home run of the season as well as his first triple and knocked in three. Marsh hit safely three times as well and also had a triple, two doubles and three runs scored.

On the opposite side Keegan Thompson (CHC) had another rough start and left the game after allowing two runs in four innings. He left with a one run lead, however, that was almost immediately eliminated by Scott Effross (CHC). As mentioned before, however, the Sox offense was on fire and they scored in five straight innings with two runs each in the fourth, fifth and sixth. This gave them another great shot to win, but Angulo gave up three walks, a home run and a single in the 9th without recording an out and was lucky that only four runs scored against him. Surprise added four more in the tenth to lock the game away.

Kirk McCarty (CLE) started for the Sox on Thursday against the Rafters and continued to be the team’s second most reliable starter after Daniel Gossett (OAK). He went a season high five innings and allowed two runs on four hits to earn the win. While Mesa hit three home runs in this game to back McCarty, the top offensive performer was Marsh again as he had two hits, a walk and two steals. Jared Young (CHC) also had a nice game with three hits.

The Sox bumped their winning streak to two on Friday, again facing Salt River. Deichmann went deep for the seventh time and Marsh added a double as they barely squeaked by with the one run win. Gossett started and went three no hit innings in the scheduled seven inning game. Manny Alvarez (CLE) blew the save in the fourth, but the rest of the pen was up to the task and held the lead that was retaken in the sixth.

Adell, Amaya and Deichmann all started in Saturday’s Fall Stars game at Talking Stick, but all went hitless. The East took the 4-2 win, largely thanks to top Twins prospect Royce Lewis. Both runs allowed by the East Fall Stars were given up by members of the Solar Sox, Castro and Mattson while Angulo pitched well in relief, striking out both of his batters faced.

Prior to Monday’s night game against the Desert Dogs and the beginning of the second half of the season, the Solar Sox lost a couple players. With no reason given, Nolan Jones and Isaac Paredes have been removed from the Mesa roster.

India swings at a pitch during a 2019 AFL game with the Desert Dogs. – Joseph Coblitz, BurningRiverBaseball

Thompson started again for the Sox and struggled, allowing three runs in 3.2 innings, but it was relief pitcher Will Vest (DET) who let things get away with five runs allowed in the eighth. The Dogs hit two homers on their way to nine runs including the third by Reds star Jonathan India, who had a very slow start to the season.

Marsh continued his extremely hot season despite the loss with two solo home runs. Zack Short and Alfonso Rivas added two hits each as well. There  are now less than two weeks left in the season with the championship game scheduled for October 26th at 11:08 am at Talking Stick. At 10-10, the Sox are still within striking distance of the current East leaders, the Salt River Rafters.