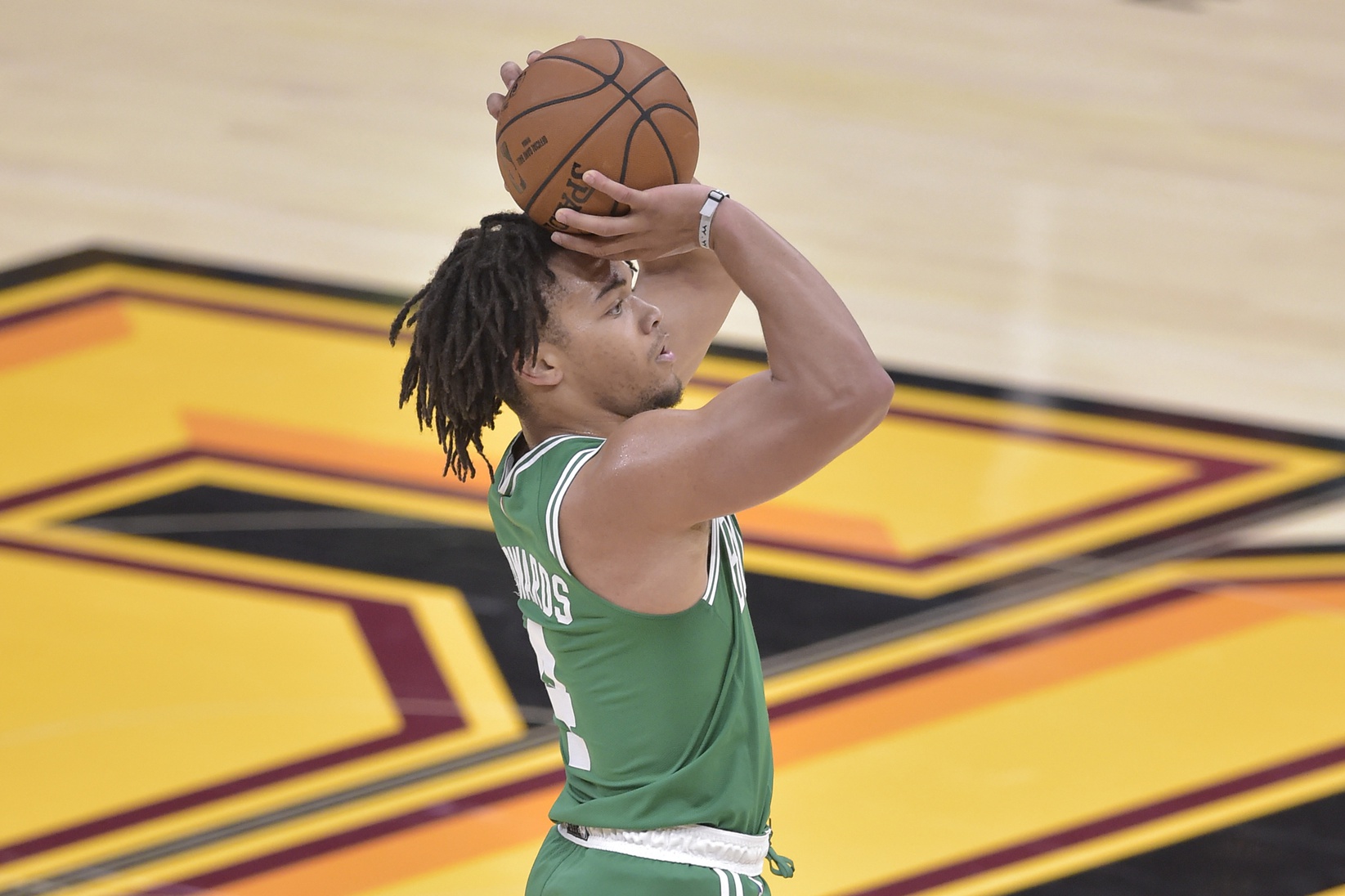 The Celtics wrapped up the preseason on Tuesday night with a rousing 118-95 victory over the Cleveland Cavaliers. While they throttled the Cavs on Sunday with a full roster, last night was a bit different as the Celtics left basically their entire rotation at home.

A large group of Celtics did not travel with the team for today’s game in Cleveland: Kemba, Brown, Hayward, Tatum, Kanter, Smart, Theis

That left us with rookies, unproven bench guys, and some players that we will not see once the regular season starts. Albeit a gutted roster, the Celtics didn’t take their foot off the gas pedal and gave the Cavs their second beating in three days.

Leading the way was rookie guard Carsen Edwards as the former Purdue Boilermaker poured in 30 points on 10/16 shooting from the floor and 9/15 from three. He went out early in the first half after taking an elbow, but once he returned to the floor and the second half commenced, Edwards caught fire.

Carsen Edwards looked like Ray Allen in the third quarter: It was an ugly opening 24 minutes for the rookie against the Cavs after taking an elbow from big man Jarell Martin in the nose. He mustered just four points before the break on 1-of-4 shooting before putting together one of the great preseason offensive stretches in Celtics history. The 21-year-old erupted for 26 points in the first eight minutes of the third quarter, including eight made 3-pointers in the first half of the frame, which turned an 11-point lead at the break into a blowout.

It was an absolute shooting clinic put on by Edwards as he hit 8/9 threes in a 5:06 span. While it may be new to us, this is nothing new for Edwards as he’s always been the type to catch fire at any moment. Back in the NCAA Tournament he put on a show as he averaged 34.8 point per game while shooting 46.9% from deep. He comes to play, and that type of poise and moxie will be a key in his quest for minutes in a crowded rotation. We could very well see Edwards in the Terry Rozier-role from last year as some instant offense/a spark plug off the bench.

Other than Edwards, another guard showed out for the green as Tremont Waters had an eye-opening performance of his own.

Waters was also extremely impressive in this game, showing off what’s becoming a trademark shiftiness that opens up driving and passing lanes. In fact, Waters shot just as well as Edwards overall by effectively getting past Cavs defenders (which, admittedly, isn’t the hardest thing to do) and finishing at the rim. Waters finished with 24 points and 7 assists.

“You look at a guy that size and you try to figure out how he does it,” Stevens said. “And he just keeps doing it.”

👀 this move by Tremont Waters!

That move epitomizes everything Waters is about: Shifty, smart, and he doesn’t waste a step out there. Everything is calculated and no dribbles/steps are wasted. It’s impressive to watch how in control he is of the game when he’s out there and how he dictates the pace of the game singlehandedly. Waters’ basketball IQ is off the charts and I have a feeling he’s already in Brad Stevens’ good graces after the summer/fall he’s had in green. While he’s on a 2-Way contract as we speak, the Celtics may make a decision to fully-guarantee his deal as they’re high on Waters’ potential as an NBA point guard.

Other than the guards, Javonte Green (16 points and 9 rebounds), Grant Williams (8 points, 3 rebounds, and 5 assists), and Vincent Poirier (8 points, 6 rebounds, 3 assists, and 2 steals/blocks) all had a nice end to their preseason’s.

As he’s in a battle for the final roster spot, Green’s performance cannot be overlooked.

Javonte Green has the edge for the 15th roster spot over Max Strus: The Celtics have put together plenty of talent at the bottom of the roster with the pair of swingman but Green put an exclamation point on a terrific preseason with 16 points and 9 rebounds against the Cavs Tuesday. The 26-year-old shot 80 percent from the field in four exhibition games (16-of-20) while showing off high-level athleticism that allowed him to get past defenders nearly at will.

His athleticism is other-worldly and that athleticism coupled with his willingness to work hard on both ends makes him a perfect fit for that last spot. His jumper isn’t anything to write home about but if he can keep his energy up when he’s out there, he’ll be effective with plays like this put-back dunk.

Even though the Celtics left their stars at home, last night was a fitting end to a great training camp and preseason. They didn’t miss a beat with the drop in talent and basically beat the Cav’s regulars with the end of their bench. That doesn’t say much due to the talent level of the Cavs, but it’s a positive sign.

Lastly, Robert Williams went out early in the first after taking a hard elbow and, unlike Edwards, did not return to action.

Both Carsen Edwards & Robert Williams are out of the game vs Cleveland after they both took elbows to the face pic.twitter.com/zswM8teDDg

Now that preseason is out of the way, buckle up, and get ready for next Wednesday where the Celtics open up in Philly as they take on the 76ers at 8 PM ET on ESPN.

To help explain why an NBA roster spot would mean so much to Green, it might help to know about his first season overseas in Spain. The money wasn’t anything special, but he was paid to play basketball. The only problem: He was homesick for Khloe (his daughter). For the first time in her young life, Christmas went by and Khloe wasn’t with Green.

“For me, that was unusual,” Green said. “If it wasn’t every weekend, it was every other weekend. … But after my first year overseas, it was like, ‘This is so hard.’ You have FaceTime, but the physical level is not there. It was very hard for me.”

If you weren’t rooting for Javonte Green already, this story will make you buy-in hook, line, and sinker. The spot means so much to him for so many reasons but his story is what really makes it hit home. He’s been away from his daughters for years as he’s had to grind it out overseas. A roster spot wouldn’t just mean an opportunity in the NBA for Green, but the chance to be with his daughters yearlong. Definitely take the time to read the entire story as Westerholm does a fantastic job of setting the scene and letting the public into Green’s world.

Sorry Max Strus and your sweet jumper, but Green has stolen my heart and I’m going to have to move all of my chips in his corner for the final roster spot.