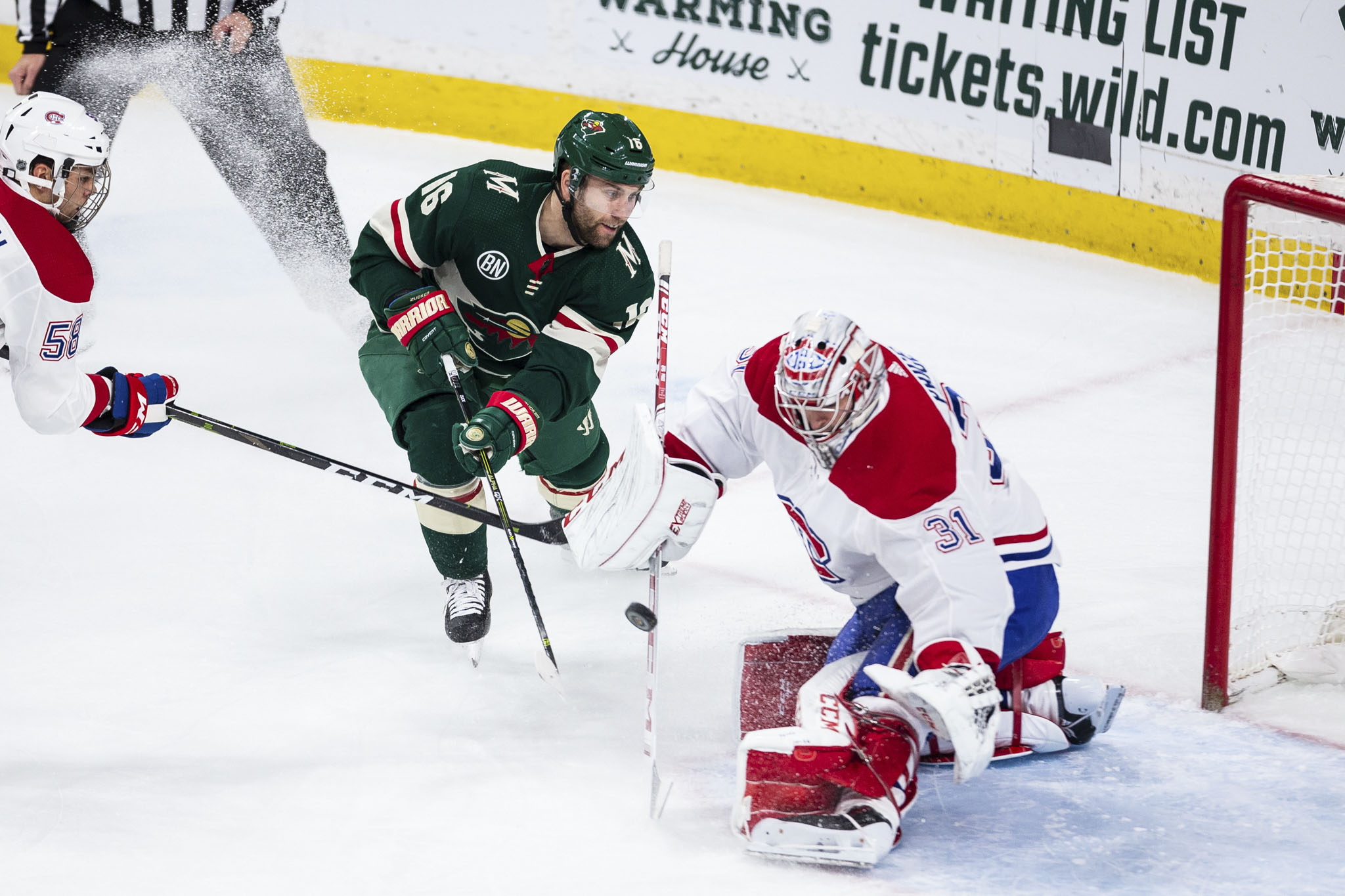 Back when I worked a summer job as a custodian, I always remember my co-workers talking about the importance of looking busy when the boss was around.  It was simply assumed that if the boss was around, he’d better not catch you just chatting or sort of coasting through the job or that could mean bad news.  No one really knew what they’d do, but you certainly didn’t want to find out.  I wonder if that’s how the Minnesota Wild are feeling as team owner Craig Leipold and General Manager Bill Guerin are tagging along on the road trip.

So far its been kind of mixed bag.  A win on Monday, a loss on Tuesday and now they have the opportunity leave a good / bad impression depending how tonight’s game against Montreal works out.  While I don’t think a loss will mean some kind of house cleaning roster-wise, you sense that management is learning some hard lessons about this team right now as it sits in the basement of the Central Division.  Can they earn a win in Montreal and give this team a bit of a reprieve before returning to St. Paul?

1st Period Thoughts: Just as a note, Derek wrote the intro paragraphs, and it’s Theresa here. Remember a few games ago and I told you our tales of woe when it comes to watching games this season? Well today’s tale of woe was I turned on the game on YouTube TV and had no sound. So after a long day working in technical support, I had to troubleshoot my own stuff. Because of that, I missed the first 30 seconds of the game. Thankfully, I missed very little. At least I didn’t miss Gerald Mayhew’s first shot of the game. Again, he looks like he’s with the Wild to actually make a difference. The Wild’s continual march to the penalty box this season has started early, with Zach Parise sitting for 2 minutes for high sticking. I have to admit I’m a bit sad to see that Victor Rask is out of tonight’s lineup with a lower body injury. He’s been playing well as of late, so I just hope this doesn’t set him back in his creating chemistry with this team. With Rask out, that has Kevin Fiala back in the lineup. It would be nice to see that Fiala’s recent healthy scratch makes a difference in his play. However, near the mid-point of the period, the Wild are getting some decent puck movement and shot attempts. This needs to continue throughout the game. Unfortunately as we cross the mid-point of the game, that bit of excitement has not continued. Minnesota would get their first power play of the game ager Artturi Lehkonen was called for holding. While Minnesota, and in particular Fiala, would make a great push at scoring with the extra skater and they certainly had Montreal moving, they were unable to get the first goal of the game. While I was not pleased with the shorthanded rushes the other way, there wasn’t much I could complain about when it came to the Wild’s attempt. Just when you think this period could end up going to intermission with a 0-0 tie, the Wild  had a break down behind the Wild net (um, hello Fiala, what are you doing?) which allowed for Victor Mete to tally the first goal of the night. Not only is it the first goal of the night, but it’s Mete’s first NHL goal. And things just get worse, with Nick Seeler heading to the penalty box for delay of game after sending the puck out of play. Things would get worse, after Luke Kunin was called for high sticking. With the 2-man advantage, Joel Armia was able to easily make this a 2-0 game, late in the period. Just after the kill of the Kunin penalty, Nick Suzuki also tallied his first NHL goal. Clearly, Stalock will be finding himself on the bench soon, most likely after the intermission. This was 20 minutes I wish I could purge from my memory.

2nd Period Thoughts: Oh goodie, less than two minutes in and Jason Zucker is sent to the penalty box for holding. Why am I watching this game? The penalty will get evened up about halfway into Montreal’s power play when Shea Weber was also called for holding. Minnesota was able to kill their portion of the penalties and would attempt their own chance at the power play. Minnesota also wouldn’t score, and of course shortly after their own power play ended, Mayhew would head to the penalty box for holding. I’ll admit, I’m still a bit shocked that Stalock is still in goal. In the first minute of of the Canadiens power play, a toughness aware needs to go to Joel Ericksson Ek after be blocked several blasts by Weber. The Wild would get another power play chance with Tomas Tatar getting called for interference. If ever there was a time for this team to make a stand, this would be the time. However, I’m not holding my breath. I’m glad I wasn’t holding my breath, because nothing became of that power play. Possible bad news, is that Zucker took a puck off the inside of the knee off of a Jared Spurgeon shot. Zucker had to crawl back to the ice. He’s currently on the bench grimacing in agony, so we can only hope that it’s just some pain and nothing more serious. I mean Zucker hasn’t done a lot of thing offensively here in this young season, but you lose him, and there goes pretty much any hopes at offense. The good news is that with just under five minutes remaining in the period, Zucker made his return to the ice. I’m sure players like Zucker will be glad that this road trip is over after tonight. I too am going to be glad when this road trip is over. All I can say about this period is that I’m glad that it’s still only 3-0 Montreal and no further goals by the Canadiens were scored.

3rd Period Thoughts: Just 20 minutes more to go. I’ve had to continually break today up into smaller segments in order to make it through the day. Well the first minute of this period wasn’t exactly great, at least no additional goals. I’m struggling with concentrating on this game, much like the Wild are struggling at putting together something that even remotely resembles a hockey game. Just watching how this season has panned out so far, makes you realize just how big of an 8-ball that former General Manager Paul Fenton has put the Wild. I don’t think we’d be infinitely better with Mikael Granlund, Charlie Coyle and Nino Niederreiter in the lineup, but I don’t think it could be worse. But who knows. Although if Fenton had attempted to get better returns on his trades, allowed Eric Staal to be traded to Winnipeg, and didn’t focus so much time trying to get rid of Zucker (for whatever ridiculous power-trip reason), things could have definitely been better. The Wild would get a mid period power play after Cale Fleury was called for high sticking. Again, nothing would happen with this power play, just like they’ve made nothing of the game itself. After the killed power play, Matt Dumba would have a horrid clearing attempt while he was alone in the Wild zone. That failed clearing attempt would be intercepted and turn into an easy, unassisted goal by Brendan Gallagher. The Wild would be awarded another power play after Ben Chiarot was called for roughing. Remember the days of yore when you actually got excited for a power play? Those days were so long ago. Now I just want them to be over. Another penalty killed with nothing to show for it. Near the end of the game, Kunin took on Nate Thompson in a tussle. Kunin held his own for a moment, until he was finally taken down to the ice. However that begs the question, why is it LUKE KUNIN that is dropping the gloves? After that Seeler and Paul Byron were both sent down the tunnel for slashing. And to think, we get to face the Canadiens again on Sunday, albeit on Sunday. With the way this season has gone, will the Minnesota Wild break the 1974-75 Washington Capitals records for fewest regular season points?

C – Damien Giroux (Saginaw, OHL) ~ the Spirit’s captain continues to lead the way as he had 2 goals, including the game winning overtime goal on the strength of 6 shots in Saginaw’s 4-3 overtime win against Sault Ste. Marie last night.  The Hanmer, Ontario-native went 13-for-21 on his draws.  Giroux has 11 goals, 15 points, -4 in 11 games.

RW – Shawn Boudrias (Cape Breton, QMJHL) ~ the power forward had an assist on the game winning goal in the Screaming Eagles’ 3-2 overtime win against Charlottetown.  Boudrias has 9 goals, 16 points, 11 PIM’s and is a +7 in 10 games.