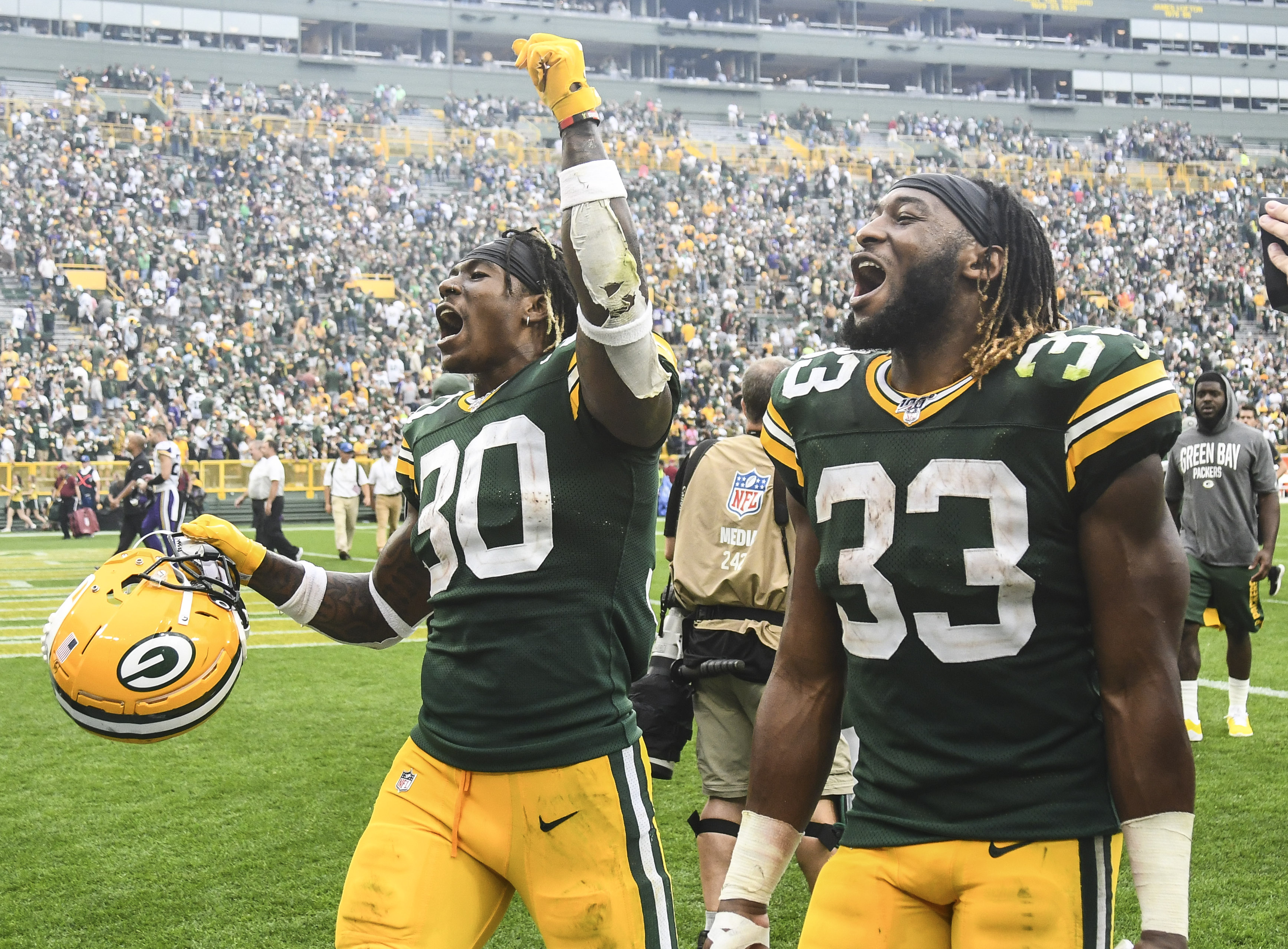 The Green Bay Packers now have an effective running game. Everybody knew that things would change in Green Bay when Matt LaFleur took over as head coach. LaFleur introduced a new offensive system and stated from Day 1 that he was going to emphasize the running game a lot more than his predecessor had. Through six games, the Green Bay running attack has become a much bigger part of the offense due in large part to the duo of Aaron Jones and Jamaal Williams.

LaFleur has been true to his word when it came to running the ball more often and integrating the running game and the passing attack. Last season under Mike McCarthy and Joe Philbin, the Packers threw the ball on 67.54 percent of their plays, the highest percentage in the NFL. Under LaFleur this season, the Packers are 15th in the league, passing on 59.59 percent of their plays.

The Packers now have a strong one-two punch at running back with Aaron Jones and Jamaal Williams. Both have different rushing styles and strengths to their games. When both players are available, LaFleur can change off between them and then stick with the player who is having a more effective game.

Jones is Green Bay’s leading rusher and is a slashing runner with excellent speed. In six games, he has 349 yards rushing and eight rushing touchdowns which matches his total for all last season. The 5’9”, 208-pound UTEP alum already has a pair of 100-plus yard games and has scored at least one touchdown in four of the team’s six contests thus far. This season, Jones has also become a more consistent receiver, catching four or more passes in four games.

One scout told the Chicago Tribune this about Jones late last season, “He runs with speed through the hole, and the thing that jumps out is he runs with exceptional balance. I’m talking about the point of contact, when his shoulders are square and he has to push through contact, he is a strong finisher. That also allows him to slip tackles and tack on extra yardage. Very good vision, and that’s valuable because he’s not going to hesitate very often. He’s going to make a cut and can get downhill in the power game, but he’s at his best as a zone runner, and that’s where his vision and that slashing, one-cut ability come into play.”

Williams doesn’t have Jones’ breakaway speed, but he is a tough, inside runner and is very fundamentally sound. The BYU product went over 100 yards against the Lions Monday night including a season-long 45-yard dash. He is also averaging 4.8-yards per carry this season.

Williams is the Packers most reliable running back. He is consistently in the right position, is a good pass blocker and receiver out of the backfield. He already has two touchdown catches this season despite missing all the Dallas game and nearly all the Philadelphia game after suffering a concussion in Week 4. Williams also runs very well in wet conditions or on a sloppy field.

Having both backs in the lineup allows LaFleur flexibility depending on the type of defense he is facing and the game situation. He has indicated he will let the circumstances dictate who gets the most touches over the course of a game.

“Each game can dictate how much [Aaron] is going to carry the ball,” LaFleur said. “That is a pretty physical position and we’d like to keep a good balance between him and Jamaal, because we think Jamaal is a pretty darn good back as well. We’d like to even out those touches a little bit.”

Jones is the undisputed starter right now, but as we saw against Detroit, LaFleur isn’t afraid to give Williams the bulk of the work when he is the more effective back.

Our 1,2 punch at RB is the filthiest if u disagree well you’re on meth

Rodgers is also impressed with his top two rushers. “We all feel great about him [Aaron Jones] and Jamaal [Williams],” Rodgers said during training camp. “That’s the one-two punch we’re looking for…Those guys have done a really nice job.”

The Packers offense is still a work in progress as the players get more comfortable in LaFleur’s system. But the one thing the running game has already proven in 2019 is that the team no longer is only relying on Rodgers to carry the team to victory. The running game with the duo of Jones and Williams can lead the team to victory even when Rodgers is not at his best. They can keep defenses honest and off balance and as one Packers coach once said allow the Packers to “run to daylight.”