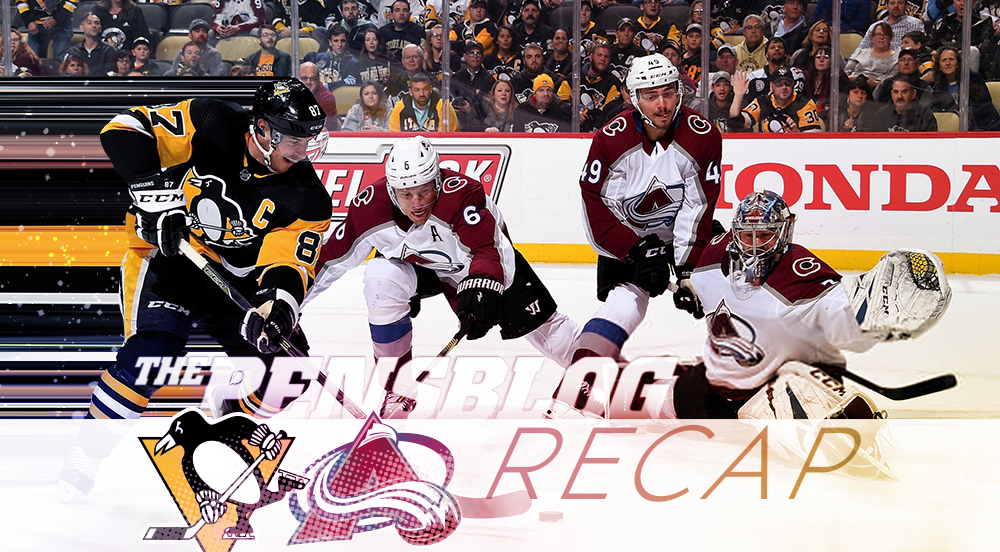 Sure would be a shame if…someone…ended it…

Let’s get into it.

First and foremost – did you know that Sidney Crosby AND Nathan MacKinnon are from Cole Harbor, Nova Scotia?

Just a little fun fact, no need to get upset about this.

With the strength of second-line center Sam Lafferty and left-winger Juuso Riikola, the Pens welcomed the (at the time) undefeated Colorado Avalanche.

You’d be excused if you sat this one out. It would make sense. Half the roster is hurt, Colorado is rolling and it’s a Wednesday in October.

The Pens, however, had other plans.

The first few minutes were about as pedestrian as it gets. NBCSN had this one hyped up as a heavyweight battle because Sidney Crosby and Nathan MacKinnon are from Cole Harbor, Nova Scotia.

Then you winced because Colorado opened the scoring.

First, Letang gloving the puck down, not a bad move. However, he’s gotta pick his head up and see what’s around him. He throws it up to no one in particular and Colorado gets to work.

Nieto gains the zone and finds Calvert streaking in late. Letang over commits and Calvert makes absolutely no mistake.

Here’s the good news: The Penguins, for the most part, controlled play before and after the Avalanche goal.

Pens had 14 shot attempts to the Avalanche’s 11 and it was a Sidney Crosby attempt the brought down the goddamn house.

Gloves the puck, turns Erik Johnson into a lamppost, undresses Samuel Girard, and for good measure, sneaks the puck past Grubauer and we’re knotted at one.

It’s just stupid at this point.

Pens with three high-danger chances to the Avs one to end the period. For what it’s worth – it could’ve been 3 or 4-1 Pens after one.

If the first period was fun to watch with back-and-forth action, the second period was great for catching up on sleep.

Also, fun reminder – both Sidney Crosby AND Nathan MacKinnon are from Cole Harbor, Nova Scotia. Not sure if you knew that. Fun fact!

Tanev got absolutely robbed by Grubauer about halfway through the period on a partial breakaway. You just wonder when he’s gonna score. He’s doing everything right. Hold that thought.

Colorado slightly controlled the play with a 21-16 edge in shot attempts, but it was Jake “Worth Every Goddamned Penny The Penguins Are Paying Him” Guentzel breaking the tie and giving the Pens their first lead of the evening.

Lol imagine thinking he’s overpaid, overrated, and only good because of Sid.

Guentzel corrals the puck from a pass from Sid, brings in it, fends off Ryan Graves (definitely not a made-up player from EA’s Franchise Mode, not at all) and just absolutely embarrasses Grubauer.

That about did it for the second period.

You just knew the Avs first line was going to wake up. Held quiet for most of the night and right off the bat in the third, Nathan MacKinnon of Cole Harbor, Nova Scotia (where Sid is also from, fun fact!) evened the score.

MacKinnon to Rantanen to MacKinnon and YOU KNEW IT WAS GONNA BE A GOAL.#GoAvsGo pic.twitter.com/DH1UW5Gmij

Dumoulin bobbles the puck, Rantanen takes advantage of it, they’re off to the races on a 2-on-1, Letang tries to force Rantanen to make a bad pass, Rantanen does the opposite and MacKinnon scores on a real nice shovel shot over Murr’s glove.

Aside from a Justin Schultz almost sort of goal…the third was relatively uneventful.

To the extra period we went.

The funniest part of overtime, surprisingly, wasn’t the goal (spoiler alert), it was Brian Dumoulin going full lumberjack on Cale Makar’s stick and acting stunned they called it.

Brian, I know it’s OT, but my dude, you came down with both hands on his stick. Penalty every single time.

With Dumoulin in the box, it was time for all of Tanev’s hard work to finally pay off.

He doesn't nap.
He loves Seinfeld.
And he scores unassisted, shorthanded, overtime goals.

Sam Lafferty continued his unreal NHL debut with a slick outlet pass to Tanev, and he went to work. Cutting across the middle, Tanev was clearly trying to kill clock. About a minute left in OT and 40 seconds to go in the penalty, he puts a harmless half-shot on net, it fools Grubauer, Landeskog tries to keep it out but buries it in his own net.