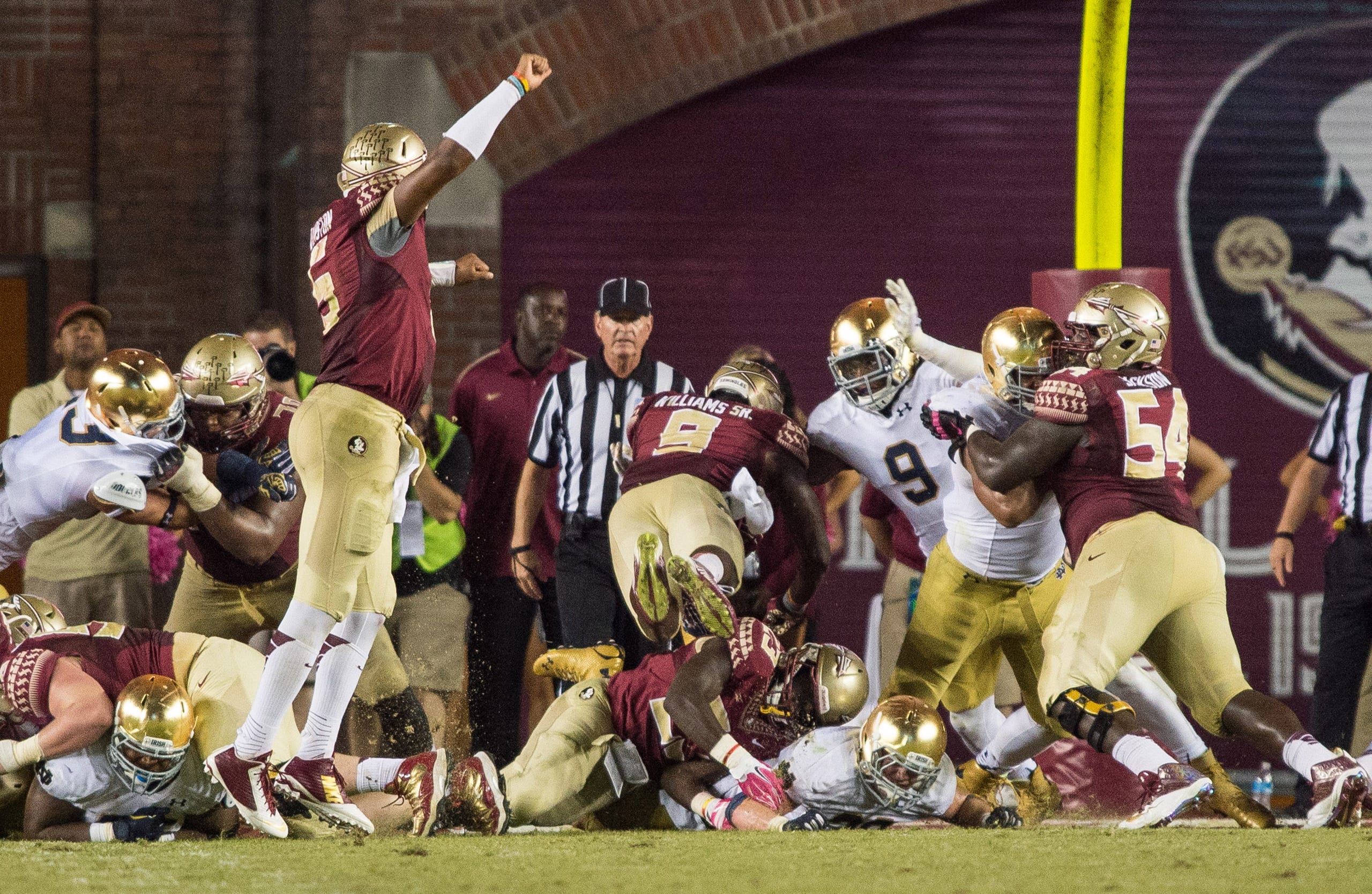 Two traditional powers, Notre Dame and Florida State have played a number of top-5 and top-10 contests over the years, including a few against each other. The 1993 contest in South Bend dubbed as the “Game of the Century” is probably the most notable, but perhaps the second-most notable came on this day five years ago.

Defending national champion Florida State was 6-0, ranked No. 2 in the country and riding a 22-game winning streak as it welcomed No. 5 Notre Dame to Doak Campbell Stadium on Oct. 18, 2014. The contest would come down to the final seconds, but it was a late penalty that would be the difference in a 31-27 victory for the Seminoles.

There had been three ties through three quarters, but FSU never led until the fourth quarter. The contest was tied 24-24 entering the final period before Notre Dame’s Kyle Brindza connected on a 46-yard field goal to put the Fighting Irish back in front, 27-24, with less than 12 minutes remaining.

It took the Seminoles and reigning Heisman Trophy winning quarterback Jameis Winston 10 plays and more than four minutes to travel 75 yards for their first lead. Winston was 5-for-6 on the drive, which included a 15-yard strike to Rashad Greene on third down to set FSU up with goal-to-go. Two plays later, Karlos Williams’ second rushing touchdown of the night put Florida State in front for the first time.

After stalling in FSU territory, the Fighting Irish were able to pin the Seminoles deep in their own territory. After forcing a 3-and-out, Notre Dame got the ball back on FSU’s side of the field with less than three minutes to play.

Following a third down sack of Notre Dame quarterback Everett Golson from FSU linebacker Terrance Smith, the Fighting Irish faced 4th-and-18 from their own 43-yard-line. On the critical fourth down, Golson was able to extend the play with his legs before finding Corey Robinson for 20 yards to keep the drive alive.

Golson used his arms and legs to march Notre Dame inside the FSU 10-yard-line. After a 6-yard completion to running back C.J. Prosise, Notre Dame again faced fourth down — this time with goal to go from the 2-yard-line. With just 13 seconds to play, Golson found Robinson for what looked to be the winning touchdown.

Unfortunately for Notre Dame, there was a flag.

The officials ruled that the Fighting Irish had committed an illegal pick and the offensive pass interference call pushed Notre Dame back to the 17-yard-line. With one last chance, linebacker Jacob Pugh intercepted Golson for the second time that evening — this time in the end zone — and the Seminoles prevailed.

Golson finished the night with 313 yards passing and three touchdown tosses — two to Robinson — in the loss. Tarean Folston rushed for 120 yards in the loss.

The Notre Dame defense held FSU to just 50 yards rushing, but Winston passed for 273 yards, two touchdowns and an interception. Greene had eight catches for a game-high 108 yards receiving and a touchdown.

After a 6-0 start, the heartbreaking, controversial loss seemed to trigger a downward spiral as Notre Dame dropped five of its final six regular season games before topping LSU in the Music City Bowl. FSU would run its winning streak to 29 games and win a third straight ACC title before losing to Oregon in the Rose Bowl as part of the College Football Playoff. Fans of Notre Dame may still dispute the decisive interference call, but on this day five years ago, the luck of the Irish was wearing garnet and gold.