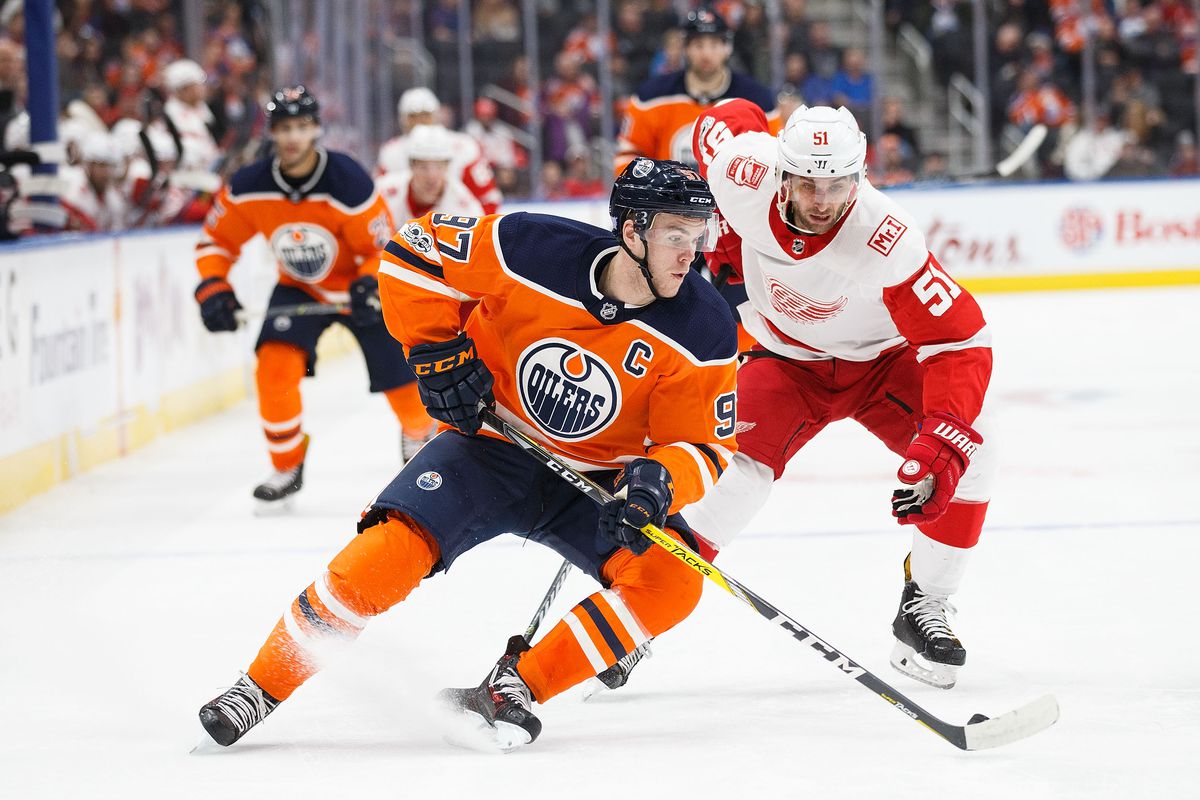 The Edmonton Oilers close out a brief two-game home stand tonight against the Detroit Red Wings at Rogers Place. It’s the first of two meetings between the sides this season, and the only visit by the Wings to Northern Alberta. It’s also the first time the Oil will play the Red Wings since hiring Ken Holland in May.

The Oilers are coming off of a wild 6-3 victory over the Philadelphia Flyers on Wednesday night, highlighted by Connor McDavid’s five points. The club will debut their new third jerseys, which will be worn during every Friday night home game this season.

Mikko Koskinen gets the start for the Oilers, while Jonathan Bernier gets the nod for the Red Wings.

Edmonton: Avoid turnovers! It sounds so simple, but the Oilers have been extremely sloppy in each of the last two games. They were very fortunate to win on Wednesday. If they want to win their seventh game of the season, they’ll need to take much better care of the puck. This Detroit team has a lot of skill at the top of the roster.

Detroit: The Red Wings have to play with pace in this game to have a chance. Detroit does not have a deep roster and their defense is both young and weak. If they allow Edmonton to dictate the pace of play, they’ll get run out of the building. Move the puck quickly and attack the Edmonton defense.

Edmonton: Riley Sheahan revenge game? The veteran pivot, a former Red Wing himself, has fit in quite nicely with the Oilers. He’s solid on the penalty kill and has won 55.4% of his draws. He has no points, however, and is due to find the scoreboard. Is there a better time than against his former team?

Detroit: Anthony Mantha has always seemed like a player on the cusp of becoming a cornerstone piece for the Red Wings. He’s taken another step this season, scoring six goals in seven games. He’s become a big piece in this rebuilding process for the Red Wings. His heavy shot makes him dangerous every shift.

The Oilers had an optional skate this morning, but the expectation is that the forward lines will remain largely the same. William Lagesson was recalled on Thursday and could draw into the lineup in place of Brandon Manning. Joakim Nygard was placed on IR after suffering a rib injury. Markus Granlund and Manning are likely to be the healthy scratches.

The Wings had a relatively quiet off-season, as GM Steve Yzerman took over and continued a much needed rebuild. NCAA free agent Taro Hirose has joined the lineup full-time, while Adam Erne was acquired from the Lightning. The club signed defenseman Patrik Nemeth in free agency and recently traded for veteran Alex Biega.

The Oilers have enjoyed recent success against the Red Wings. In their last eight meetings with Detroit, the Oilers have a 5-2-1 record. The sides have split each of the last two season series, with the road team winning the last four contests. The Oilers hope to snap that trend tonight and collect their seventh win in eight tries.

Edmonton is enjoying one of their most successful starts to a season. The last time they started 6-1-0? 2016-17, which is also the last time the club reached the playoffs. Edmonton won their eighth game to improve to 7-1-0 that season, defeating the Vancouver Canucks 2-0.

Only three players in the NHL are scoring at a 2.00 point-per-game clip or better. Two of them play for the Edmonton Oilers. Connor McDavid (2.43) and Leon Draisaitl (2.14) lead the league in this category.