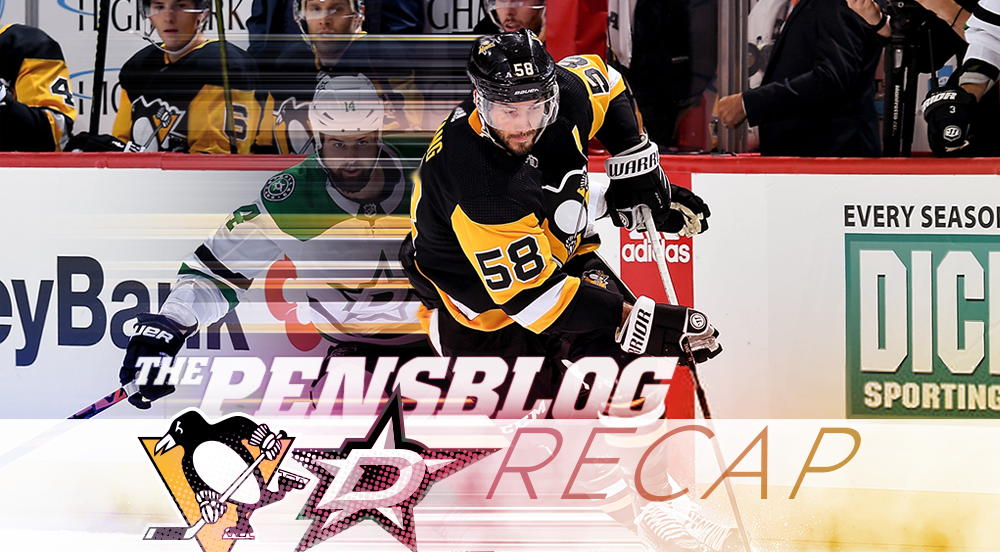 The Penguins welcomed the fading Dallas Stars into The Paint Can last night. The biggest news heading into this game was an injury update as Bryan Rust, Evgeni Malkin, Nick Bjugstad all skated in the morning skate prior to the game. Alex Galchenyuk also took a few laps shortly after uncle Ben’s funeral. Right before puck drop, it was announced Jared McCann would be good to go for this one so the Pens lineup looked something like this:

The puck dropped, and um, that was about it. I split screened this period while catching up on Peaky Blinders and if you missed the period as well you didn’t miss anything. Shots finished 10-5 Pens, so I can only assume Anton Khudumplin is twice as good as Murray.

With Netflix closed and the Pens back up on the big screen, I was fortunate enough to look up just in time to see the Stars bust out an odd-man rush and make it 1-0.

Odd-man breaks given up always mean defensive breakdowns somewhere. Here is one analysis:

Hintz skated past Tanev. Not sure if that was Blueger's man or not.
Marino stepped forward in the neutral zone and Hintz blew past everyone

Tanev is the first man blamed, and that’s stupid so I’ll ignore that part. Blueger is the next man called out by Dan, so did Blueger, the center not pick up his man?

No I think Teddy is looking pretty good right here. The pass goes from the defensive right circle across ice to the left side, which happens to be where Dan’s next victim is stationed, John Marino. Marino stepped forward and blew his coverage according to Dan…

Marino does “step forward,” but using this frame here it seems to me Marino has the puck carrier, his man, well contained. In fact, the man is so well contained he has to pass the puck to an open player. Why is there an open player in the center of the ice? Interestingly in the image above see someone emerge that was conspicuously left off of Kingerski’s blame wagon.

Dan always whines on Twitter to not “pile on a guy for the sake of piling,” but that doesn’t mean you blame everyone else on the ice except for the one guy that actually talks to you. Johnson was out of position. You’re allowed to say it. We admit when Johnson plays well, and he hasn’t been terrible this year. This play he was wrong, and the goal was his fault. I would feel ashamed if I had people paying to read my sight and I ignored a player just to help support an ongoing agenda, but then again I wouldn’t make people pay to read a blog.

A few minutes after the goal the Penguins would get a powerplay and it looked really good but nothing would fall. They would build a lot of momentum off of that man advantage, but it would be the Stars with a great look and a chance to go up two before Murray told the fools to go to church.

Mike Lange always says that big saves are usually followed by scoring opportunities the other way, Mike Lange is never wrong. Not long after the save the Pens got some good circling, Hornqvist took care of the doorstep, and the jam band man McCann knotted this baby up.

Pettersson’s ability to shoot the puck low towards the net in hopes for a deflection is a hidden talent. Hornqvist with some incredible desire in front of the net to keep this play alive. This is the type of goal good teams need from their third lines.

16 shots in the frame for the Pens.

A tie game heading into the third, would the Penguins continue playing hard or would they act like most casual fans and focus on Fleury’s return tomorrow? Early in the period, Dom Simon makes a sweeping effort to get to a loose puck in the offensive zone and swat it back to Letang. Letang takes a DNA test and turns out he is 100% over your bullshit.

Patience is a virtue. pic.twitter.com/rucyPGlBFs

If Letang doesn’t score you immediately forget about it, but this is the type of play Simon makes on the regular and it is why Crosby wants him on his line. It’s a simple flick of the puck, but it results in the Penguins getting a scoring chance. Hell of a play by Letang who continues to help carry the injury-plagued Penguins.

He gets an assist on this play, but I felt this was the most noticeable Dominik Kahun has been in a Pens jersey, perhaps he’s feeling a little pressure after Sam Lafferty stepped up to the plate. Hornqvist has always been a streaky goal-scorer, but with 4 goals in 8 games he is not only on pace for another 20 goal season but pushing towards his career-high 30.

Two minutes after the goal Dallas tried to make things interesting when Klingberg buried one through a traffic jam to make it 3-2.

Murray’s view of the shot was clear, so this is definitely on him

The Stars had a few looks the rest of the way but they kind of suck. The Stars are basically constructed with a few players in their prime that don’t know how to lead with Seguin and Benn, and they are flanked with underachieving role players. It was Spezza for a few years. Now it’s Pavelski and Perry. They should be relocated to Florida with this many near-retirees. Dallas would pull their goalie with two minutes left and Kris Letang would ice things up.

Letang's second goal of the game.
Hornqvist's third point on the night.
And a big 'ol win for the Penguins. pic.twitter.com/T1MEexossI

That would do it folks, five in a row.