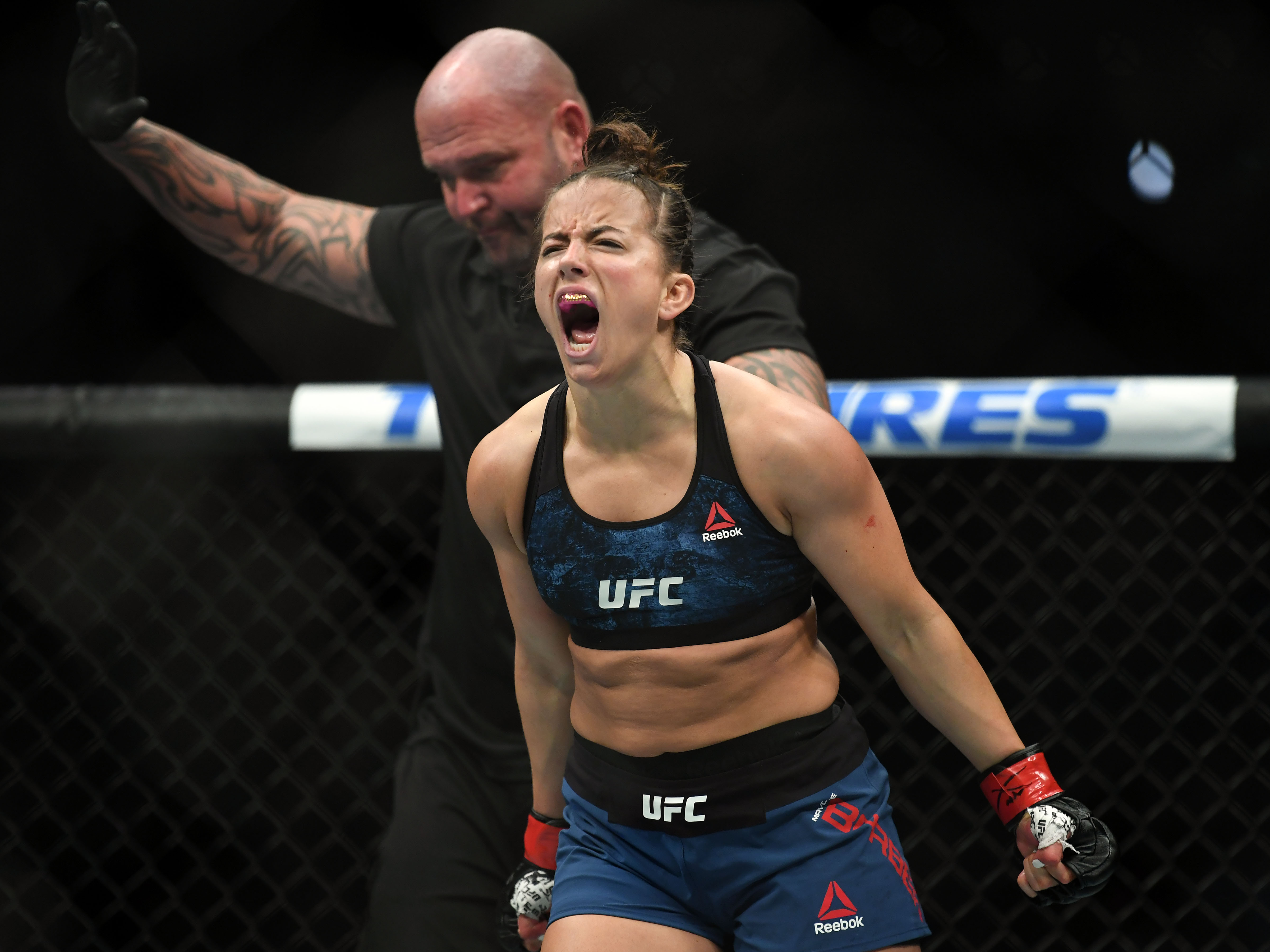 It is customary in the UFC for fighters to call out a new opponent following a win. Sometimes they make sense, like challenging a true contender in your way, while other times they don’t. When it comes to Maycee Barber, challenging Paige VanZant falls under the latter.

At UFC Boston this past Friday, Barber (8-0) defeated Gillian Robertson in the first round via TKO. Robertson (7-4) attempted to hit Barber with some stiff shots but the 21-year-old responded with heavy shots to the face and body of her opponent. Add some nasty elbows against the cage, and Barber made quick work of another opponent. She has now finished seven fighters and has five consecutive knockout wins.

The Future is bright for @MayceeBarber!!

After the fight, the woman who is ranked twelfth in the UFC Women’s Flyweight division had a chance to call anyone out. She stuck to her guns, however, and called out the fighter who hasn’t been active since January of this year.

“The only thing I know is Paige VanZant is waiting for a call,” Barber stated.“Paige VanZant, I’m gonna give you a call. Are you going to answer or not?”

The callout was met with applause, but mostly confused looks. VanZant (8-4) has been out due to a fractured right arm. In June, she stated to ESPN that she would have to undergo surgery. Since that time, she has appeared in Sports Illustrated, among other appearances, and has also been in the corner of her husband, Austin Vanderford, in Bellator.

Not even ranked, VanZant is 2-3 in her last five and it is unknown when she will even return to the octagon for her last contracted fight. Barber states that Paige won’t fight her because she is afraid her Instagram career will be ruined. Paige won’t fight someone who slid into her husband’s DM’s (a Jedi mind trick if there ever was one), while also telling Ariel Helwani that she won’t give her the time of day.

What was most revealing about that interview was Paige saying it would be a reward for Maycee to fight her. In reality, shouldn’t it be the other way around? Maycee is already in contender talks. Paige’s best shot was in 2015 when she was on a three-fight win streak that was broken by Rose Namajunas.

Maycee could have called out ranked fighters like Andrea Lee (7th) or Roxanne Modafferi (8th). A fight that could also be a fascinating one? Molly McCann (10-2), who was also on the UFC Boston card and won via unanimous decision against Diana Belbita. On a three-fight win streak, the clash in styles would be perfect. Calling your shot as a young fighter isn’t that bad, but could she have handled the situation differently?

Now, would a grudge bout between two female fighters (something that is needed in WMMA, IMO) be the worst thing? Not entirely. But when destiny is staring at you square in the face, is the juice worth the squeeze?