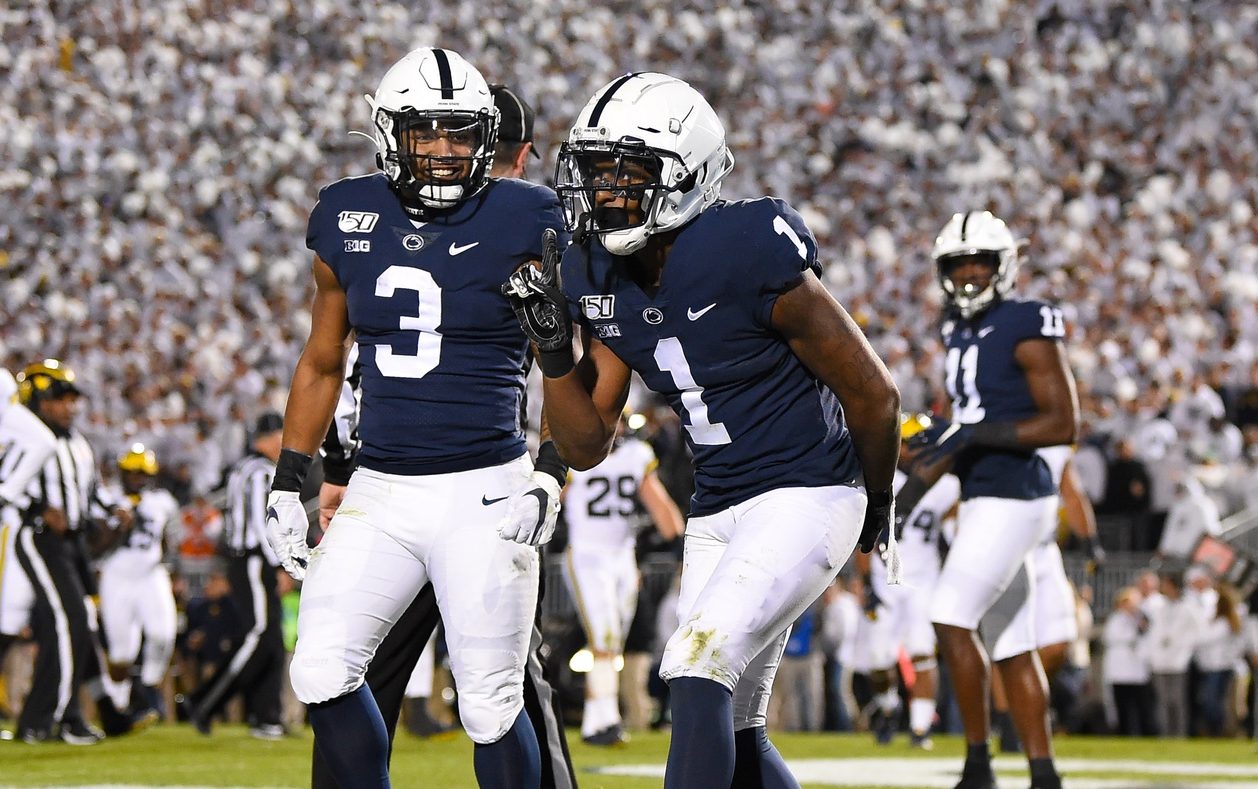 When Penn State needed a big play, who else to turn to but KJ Hamler?

After jumping out to a 21-0 lead at home against No. 16 Michigan on Saturday night, it looked as though No. 7 Penn State was going to continue the recent trend in the series of the home team blowing away the visitors. But, credit to Michigan, the Wolverines battled back and put the pressure on the Nittany Lions. And when the pressure was on, KJ Hamler came to the rescue on offense.

Hamler caught six passes for 108 yards and two touchdowns. The first touchdown came in the second quarter, extending Penn State’s first half lead to 21-0 with an absolute dime sent through the air from Sean Clifford and into the sure hands of Hamler.

Clifford had already helped to get Penn State up early on Michigan with another brilliant pass to the end zone and placed perfectly in the hands of tight end Pat Freiermuth for the first score of the game. Clifford added a rushing touchdown of his own later for a 14-0 lead.

After going up 21-0 on the Wolverines, the Nittany Lions offense seemed to go into hibernation. Michigan clawed its way back into the game with the defense forcing Penn State to punt after short drives. Michigan also got something going on offense and started to drain the Penn State defenders in the second half. On another third down and with Michigan feeling an opportunity to get the offense back on the field with a chance to tie the game, Clifford reacted smoothly to a blitz package, got the ball off to Hamler for enough yards to pick up the first down.

And as if that wasn’t clutch enough, the very next play saw Clifford go deep to a streaking Hamler.

I know. You want to see the full play, so here you go.

Despite regaining a 14-point advantage, Penn State’s defense couldn’t keep Michigan down. The Wolverines answered with a touchdown drive of their own, and Michigan had a chance to tie the game with a fourth down pass into the end zone in the final minutes. A dropped pass by Ronnie Bell resulted in a turnover on downs for Michigan, but Penn State still had some work to do to put the game away.

Once again, getting the ball to Hamler was the way to go.

On 3rd and 3 with under two minutes to play, deep in their own end, Penn State chose to get Hamler the ball with a run. Sliding Hamler to the right of Clifford before the snap led to a handoff to the receiver, who took off to the left side of the line. Hamler cut up the field rather than sweep wide to the left. Without much room to wiggle through, Hamler powered his smaller frame up against the defense and squeezed out just enough yardage to pick up the first down. He took a hit in doing so.

Hamler’s ability to pick up four yards on third down was, essentially, the real game-winning play. And this is the same player that gets credit for scoring the game-winning score. This was a game-winning first down.

Coming up on the Locked On Nittany Lions Podcast…

After missing an episode on Friday, the Locked On Nittany Lions podcast returns Monday with a look back at the big win against Michigan. We’ll also take a look around the rest of the Big Ten and any notable games around the nation and answer your mailbag questions.