Recap 09: Once a Year a Flower Blooms 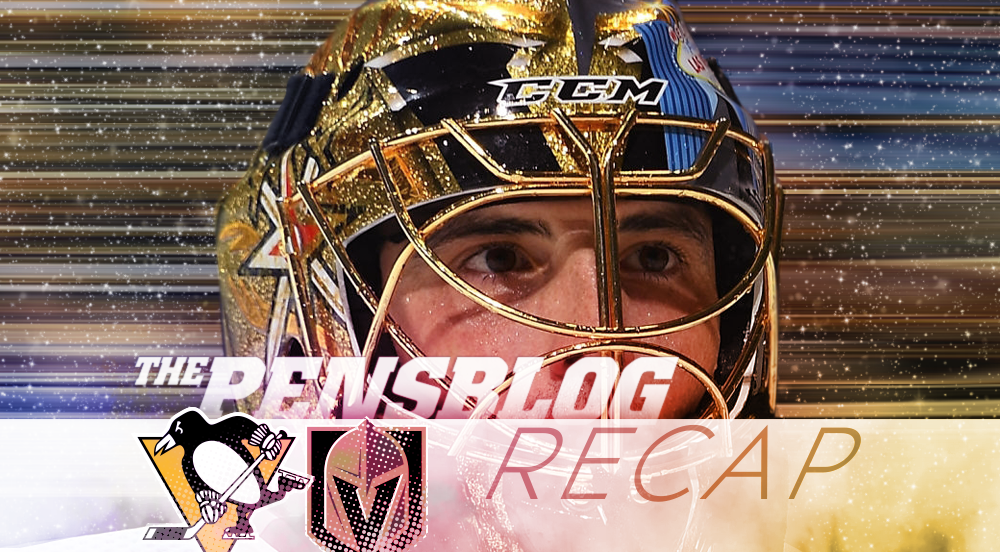 Recap 09: Once a Year a Flower Blooms

The Penguins and their five-game winning streak welcomed the Vegas Golden Knights to The Paint Can last night to complete the second half of the team’s second back-to-back of the year. Back-to-backs are killer for any team, even if they didn’t have to travel overnight, but for a team with an injury list longer than Mark Madden’s grudges they are hell. To make matters worse, Jared McCann would be held out of the lineup after playing the night before. McCann had missed a game prior to Friday’s for a nagging lower-body injury. As if putting Jusso Riikola on the wing again wasn’t enough Brian Dumoulin attended the pregame warmup skate but was then also scratched, and Jack Johnson had to rush to the arena from a Smoothie King to suit up in less than 20 minutes.

Apparently the goaltender for the Knights used to play for the Penguins. Five minutes into the frame the Pens would get an early powerplay chance after Brayden McNabb interfered with Dominik Simon. The powerplay looked really good but couldn’t convert. The Penguins had a considerable amount of jump in the period and several chances but nothing was doing and we would end 0-0, which some would consider a small victory considering the lineup.

How are things going thus far?

Here's what the numbers have to say ⬇️ pic.twitter.com/tLtPzejOfr

The Penguins decided to follow up their strong first period with more of a challenge in the second as Zach Aston-Reese took a goaltender interference call after driving right through Fleury. The ensuing penalty kill was going okay, until the two defenders were Johnson and Gudbranson. The penalty killers should never be Johnson AND Gudbranson, it’s tit for tat, take tit for tat, not tit and tat, that’s a double blow my friend, and that’s what happened.

60% of the time, it works every time pic.twitter.com/mn5XTXAaWJ

I’m not going to turn to Moonshine Twitter for analysis of this one.

Here is Johnson guarding his man at the point, excellent gap control, gives Vegas no choice but to send the puck along the boards, good work by JJ.

After the puck goes around the net Johnson has stuck with his man and skated to the front of the net while Gudbranson goes for a battle along the wall. Again, this is textbook.

Gudbranson gets beat to the puck and at this point, Johnson thinks he can be sneaky and cut off a puck that goes back behind the net

If you look at the image above, the Penguins have excellent defensive positioning had Johnson stayed on his assignment. Presumably, Johnson anticipated the play along the boards because that is the decision he would’ve made had he had the puck, but instead Vegas drops it to an open player as JJ continues his field trip…

Not seen in the image above is a wide-open Paul Statsny near the top of the right circle. You can’t see it because I cropped the image, but an NHL defender should’ve seen it and realized that leaving his spot even for a chance to play a possible loose puck is not a good idea. The puck comes to Johnson’s man, the puck is sent through the open area Johnson is no longer attending, and Statsny gets this look on goal

This is so unbelievably frustrating that the only good news is we only have four more years of this instead of five.

Did Johnson make a mistake or did his teammates not come through on a simple puck?

Depends which player your emotions want to blame. https://t.co/vfn4vEUhw5

Depends on which player you want your emotions to blame…

Like they have done over the last five games, the Penguins put the early goal behind them and got right back to work. They tilted the ice and put up some quality chances but couldn’t get anything to go. After ringing a puck off the crossbar and looking like they may tie this think up Simon took a high sticking penalty and it was back to the PK. The Knights held the puck in the offensive zone for the entire two minutes but Aston-Reese, Sam Laffery, Kris Letang, Johnson, and Tristan Jarry were able to hold them off the scoreboard. The rest of the period consisted of the Penguins getting this close

Time and time again but no dice.

Up in shots and lookin' for goals. pic.twitter.com/4EXyku9qFc

The Pens would start the third with the same drive they had all game which was encouraging. The biggest thing to come out of this game was the Pens desire to play, it never looked like they were coasting. Seven minutes in the Pens took to the powerplay after Reilly Smith tripped John Marino. The powerplay again looked sharp but just couldn’t convert. s that penalty expired Cody Eakin took a delay of game penalty and the Pens went back to work. Again, they got plenty of looks but it was one of those nights. Fleury made this stellar save in the process

we need to talk about this. pic.twitter.com/rIv3U1zR3q

The Pens hit another post at some point and with less than three minutes left Jon Merill took a penalty for spelling his name wrong. The Pens pulled Jarry to set up a 6v4, got a few quick looks before Vegas found the empty net to make it 2-0. The Pens would then pull Jarry again and Vegas would make it 3-0.