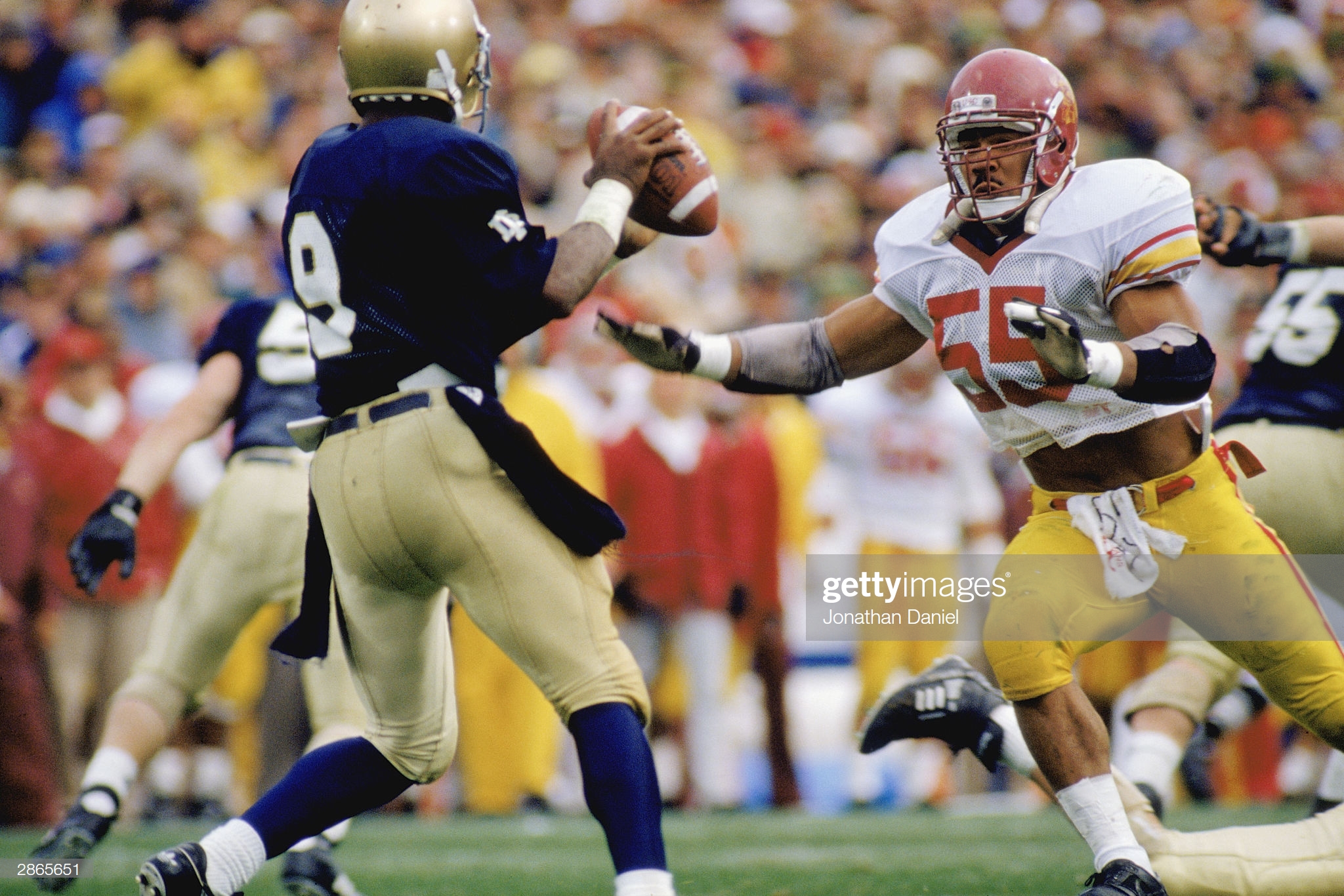 One of college football’s most storied rivalries, Notre Dame and USC have met on the gridiron 90 times. Many of those contests have had significant national implications, including the top-10 match-up that took place on this day 30 years ago.

Defending national champion Notre Dame was 6-0, ranked No. 1 in the country and on an 18-game winning streak as it welcomed No. 9 USC to Notre Dame Stadium on Oct. 21, 1989. The Trojans had opened the season with a loss to Illinois, but had bounced back to win five straight, including wins over ranked opponents, Ohio State and Washington State. A contest that started with a pregame brawl saw three second-half lead changes before Notre Dame prevailed 28-24 to run its winning streak to 19 games.

The Trojans led 17-7 at the half behind a pair of touchdown passes from quarterback Todd Marinovich, who finished the day with 333 yards passing, three touchdowns and three interceptions. After rushing for just 69 yards in the first half, the Fighting Irish finally got the ground game going in the second half behind the combination of quarterback Tony Rice, fullback Anthony Johnson and tailback Ricky Watters.

Watters’ 2-yard touchdown early in the third quarter pulled Notre Dame to within three, but a Rice fumble deep in his own territory looked like it would provide an opportunity for USC to go back up two scores. Unfortunately for the Trojans, that was not to be as Marinovich’s pass into the end zone was intercepted by Todd Lyght.

The first lead of the day for the Fighting Irish came early in the fourth quarter as Johnson capped an 80-yard scoring drive with a 35-yard touchdown run. Notre Dame seemed as though it had seized control, but a Johnson fumble — the fourth of the day for Notre Dame — on the ensuing possession set the Trojans up at the Irish’s 34-yard-line. It took Marinovich and company just four plays to cash in as the redshirt freshman Marinovich found Brad Wellman for a 15-yard touchdown strike with nine minutes to go in the contest.

Down 24-21, Rice took control of the contest for the Fighting Irish. After completing a 41-yard pass to burner Raghib Ismail, who had fumbled two returns earlier in the day, to put Notre Dame in the red zone, the senior quarterback scored the very next play on a tough 15-yard touchdown run with 5:18 to play.

Marinovich and the USC offense however, were nowhere close to done. After four straight completions put the Trojans at the Notre Dame 13-yard-line, the Fighting Irish defense tightened. On 4th-and-5 from the 8, Marinovich was pressure and forced to throw early where his pass was batted down in the end zone.

Following a stop by the defense, USC would get the ball back in Notre Dame territory with less than a minute to play, but an intentional grounding call set the Trojans back and Marinovich’s final throw of the game failed to reach the end zone.

The Fighting Irish would finish with 266 yards rushing, led by Rice’s 99. USC receiver John Jackson finished with 14 catches for 200 yards receiving in the loss.

The defeat ended any hope that USC may have had for a national championship, but it did go 4-0-1 over its final five games, capped with a PAC-10 title and a 17-10 Rose Bowl victory over Michigan. The Fighting Irish would run their win streak to 23 games before falling at eventual national champion Miami 27-10 to conclude the regular season. Notre Dame returned to South Florida for the Orange Bowl, where it defeated No. 1 Colorado, 21-6.

During the course of the 1989 season, Notre Dame would notch six wins over ranked opponents and four over top-10 foes. One of those took place on this day three decades ago.