This Past Weekend in UND Sports 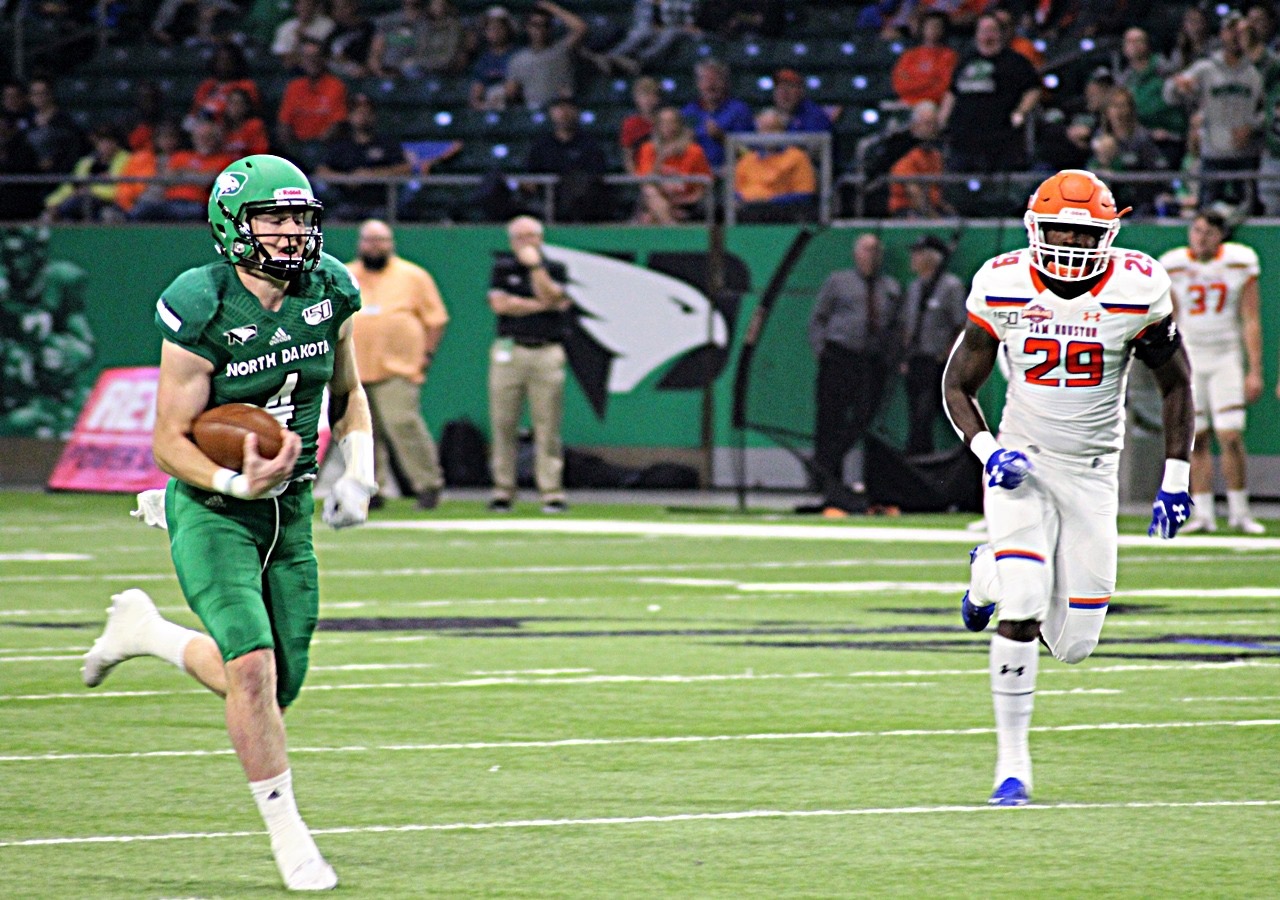 This Past Weekend in UND Sports

Wow! What a weekend in sports.  First, it’s a good thing when you finish the night signing a song. On Saturday night, after the UND’s amazing 30-26 come from behind victory over Cal Poly, the Fighting Hawks sang the school’s fight song. This season, UND has sung that song four times.

With 1:58 remaining in the game, 4th-and-2, the Mustangs were clinging to a 26-24 lead. Fighting Hawks senior quarterback Nate Ketteringham connected with Alex Cloyd for a 39-yard touchdown. That touchdown gave UND an impressive 30-26 come from behind win. The box score for Ketteringham read 20-for-30, 234 yards with two touchdowns. What’s more impressive, Ketteringham didn’t throw a single interception.

In 60 minutes of football, neither team had a turnover.

The win came with a high cost, in the first quarter, senior defensive end Mason Bennett suffered an apparent lower-body injury and was helped off of the field. According to the Grand Forks Herald, freshman defensive lineman Jalen Morrison also suffered a lower-body injury in the second quarter.

Entering Saturday’s game, UND was 0-3 on the road.  With the win, UND improves to 4-3. This weekend, the Fighting Hawks take on Montana State. Game time is noon.

KETTERINGHAM TO CLOYD ON FOURTH DOWN FOR A TOUCHDOWN! North Dakota takes a 30-26 lead! @UNDfootball#UNDproud #LGH pic.twitter.com/ALdC3HCsLV

This past weekend, the University of North Dakota hockey team traveled to Mankato to take on the 2nd/3rd ranked Minnesota State Mavericks in an important two-game, non-conference series. After playing to a 4-4 tie on Friday night. The Hawks ended up on the wrong side of a 2-1 loss on Saturday.

Watching both games, I thought UND played well this past weekend and deserved a better fate on Saturday night.

Game two, the Hawks struck first. At the 10:59 mark of the first period, freshman forward Shane Pinto gave the Hawks a 1-0 lead. With that goal, Pinto has recorded a point in each of the first four games (2g-2a—4pts). That lead didn’t last very long. Twenty-six seconds into the second period, the Mavericks tied the game with a goal from Marc Michaelis.

The Mavericks would get the game-winning goal at the 05:21 mark of the third period with a goal from Edwin Hookenson. The Hawks would make a push late in the third period but were unable to get the equalizer past Dryden McKay.

“They’re a good team, Pinto said. “I thought we played well enough to win, but it didn’t go our way. We’ve just got to bounce back here against Bemidji State.”

Up next for the Hawks, Bemidji State who was idle last weekend and enters next weekend’s series with a 0-0-2 record.

Pinto pounces on the loose puck and puts it in the back of the net! @UNDmhockey#UNDproud #LGH pic.twitter.com/ixunCAKrH3

This season, UND hopes to improve their special teams play. After four games, UND is perfect 13 for 13 on the penalty kill. On the power play, UND has gotten off to a slow start going (2-15) on the man advantage.

If you’re a fan of the NHL, you’ll know that the Wild have been horrendous to start the 2019-2020 season. Through eight games, the Minnesota Wild have gone 2-6-0 (.250). The Wild are dead last in the Western Conference standings. Last night, against the Montreal Canadiens, former UND All-American, and current Wild forward Zach Parise scored the game-winning goal to give the Wild their second win of the season. With that goal, Parise is now tied for the team lead in goals with the Brad Hunt and Jason Zucker.

After the game, Parise shared his thoughts with the media.

“We need to remember this feeling. I mean, this feels great.” -Zucker

WE LOVE THE DRAKE!

Caggiula doing what he does best, scoring highlight-reel goals.