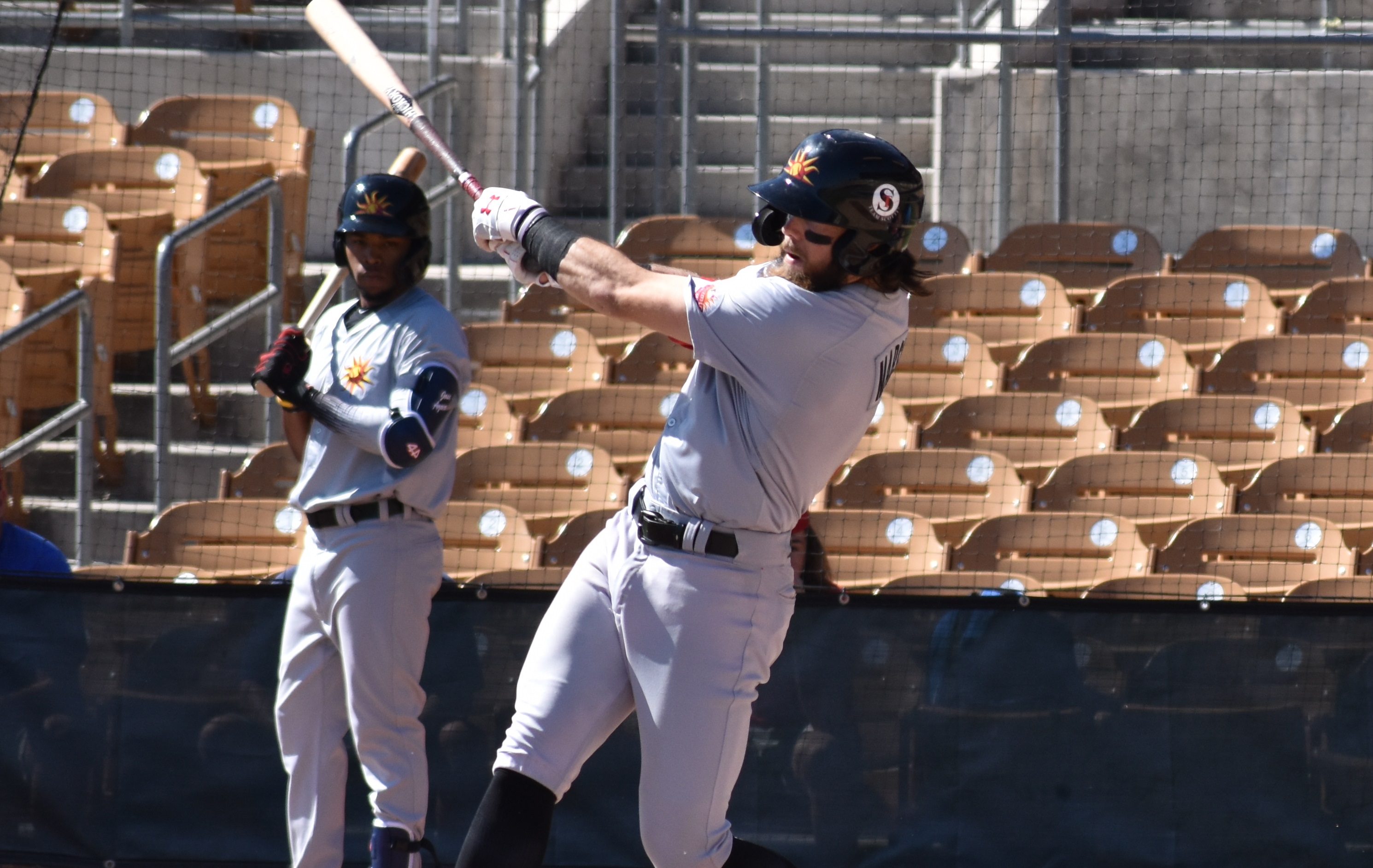 The Solar Sox ended week four of the Arizona Fall League season with a loss to the Desert Dogs following the short Fall Stars break and they began the fifth week the same way.

While Nolan Jones and Isaac Paredes had been removed from the roster the day before, Jo Adell (LAA) and Brandon Marsh (LAA) were back at the top of the line-up and each had hits on Tuesday. Jahmai Jones (LAA) had the biggest game in the line-up with a solo home run and two total RBI out of the three runs scored by the Sox.

All three runs scored against Desert Dogs starter Bernardo Flores (CWS), but the bullpen struck out seven over 4.2 shut out innings to keep the Sox off the board.

Aaron Hernandez (LAA) had another rough start for Mesa, but Isaac Mattson (LAA) and Austin Warren (LAA) went the final three innings without allowing another run. Warren was particularly dominant, striking out all three of his batters faced.

While the Mesa offense wasn’t completely absent on Thursday as they had nine hits, it certainly disappeared on Wednesday. Back at home against Scottsdale, the Scorpions used five different pitchers with the first four going two innings apiece and allowed just three hits and no runs.

Kirk McCarty (CLE) had another average start, giving up two runs in four innings while striking out six. He did not walk a batter and allowed only three hits. The lefty starter turned 24 last week and now has a 3.79 ERA through 19 innings with 16 strike outs and 6 walks allowed.

With one more run against the bullpen, specifically an unearned one against reliever Jonathan Teaney (CLE), the Scorpions took the easy 3-0 win.

The Sox played the Scorpions again, this time at home, on Friday with a nearly equivalent result as they lost 4-0. Jose Azocar (DET) had two of Mesa’s six hits, but 11 strike outs helped lead to the shut out. An All-Star last week, Anthony Castro (DET) allowed three runs over the first four innings, striking out four.

Collins throws around the horn following a strike out against the Javelinas. – Joseph Coblitz, BurningRiverBaseball

The Solar Sox went on to play a pair of games against Peoria on the weekend, starting in Mesa on Saturday. This first game against the Javelinas marked the end of the four game losing streak coming out of the Fall Stars game last Saturday. Adell had two hits including his third home run of the season while Jared Young (CHC) added his first of the season. Gavin Collins (CLE) didn’t start the game, but was big in the win as he scored after both his walk and single.

Keegan Thompson (CHC) made the start and it was easily his best of the season. He went five innings and struck out five while allowing just one hit, no walks and no runs. He had previously allowed 13 earned runs over his previous four starts (13.1 IP) after throwing a three inning shut out in his 2019 fall debut.

The Sox bullpen finished out the final four innings without allowing an earned run, leading to the 5-1 win. An unearned run did come across against Billy Lescher (DET), who walked two without a hit allowed in 1.2 innings.

Hernandez makes a start for the Solar Sox in Peoria during the 2019 AFL season. – Joseph Coblitz, BurningRiverBaseball

The Sox won the rematch on Sunday as well in Peoria, largely thanks to the best start (for any AFL pitcher) of the season. Over his first four starts, Hernandez maxed out at 3.1 innings and allowed seven runs in 9.2 innings. On Sunday, however, he was lights out. Going five innings, he didn’t allow a hit and struck out five with just one walk. I was able to see Hernandez’s last three starts in person and he looked like a completely different pitcher this time around.

In general, the relief pitching was solid as well, although not quite as hitless. The only flawed performance was Teaney, who walked three and allowed the only two runs of the games for the Javelinas.

Penn Murfee (SEA) had a nice start for Peoria as well, allowing just one run in four innings as Ernie Clement tripled to start the game, then scored on a fielder’s choice. It wasn’t until the seventh that the offense really got started when Greg Deichmann (OAK) hit his eighth home run of the season. Derek Hill (DET) also had a massive two run shot to left in this inning and Clement added an RBI single. With a double between those at bats for Clement, he finished just a home run short of the cycle.

The Sox kept the foot on the pedal in the ninth with RBI hits from Collins and Nick Allen (OAK) for three more runs and the win.

Mesa turned their four game losing streak into a three game winning streak on Monday with another excellent starting appearance. Kirk McCarty made his final appearance of the 2019 season with a five inning shut out of the Surprise Saguaros. He struck out three and allowed just three hits without a walk.

McCarty ended up making six appearances during the AFL season and struck out 19 in 24 innings. His 3.00 ERA is second best among starters behind Daniel Gosset. After missing most of the 2019 regular season with injury, this brings his total innings to 79.2.

Unlike Sunday night, this time, it was the bullpen who threw a no hitter as Uelman, Manuel Alvarez (CLE) and Jhenderson Hurtado (OAK) went the final four without a hit or run allowed. Uelman walked two in two innings while Alvarez racked up two K’s.

Every offensive starter for the Sox, with the exception of Adell, had at least one hit as they went on to win 4-0 with 11 hits. Deichmann had the only home run, his ninth of the season.

I’ll have my official picks for things like offensive performer of the year when the season ends at the end of the week, but it’s already fairly obvious that the Sox best player was Deichmann. He leads the way by a large margin with a .708 slugging percent and 20 RBI (Marsh is second with a .540 SLG and 11 RBI).

While he hits second in the AFL in RBI, Deichmann is first overall in sluggin and home runs and would likely remain so even if he sat out the last week.

Currently, the Solar Sox have Tuesday off, then play three straight home games to end the season. Since they are three games back, they would have to win all three to tie the Salt River Rafters for first place in the East (and the Rafters would have to lose all three). If they win out, they would also tie Salt River in head to head record as they are currently 2-3 against their primary rival.