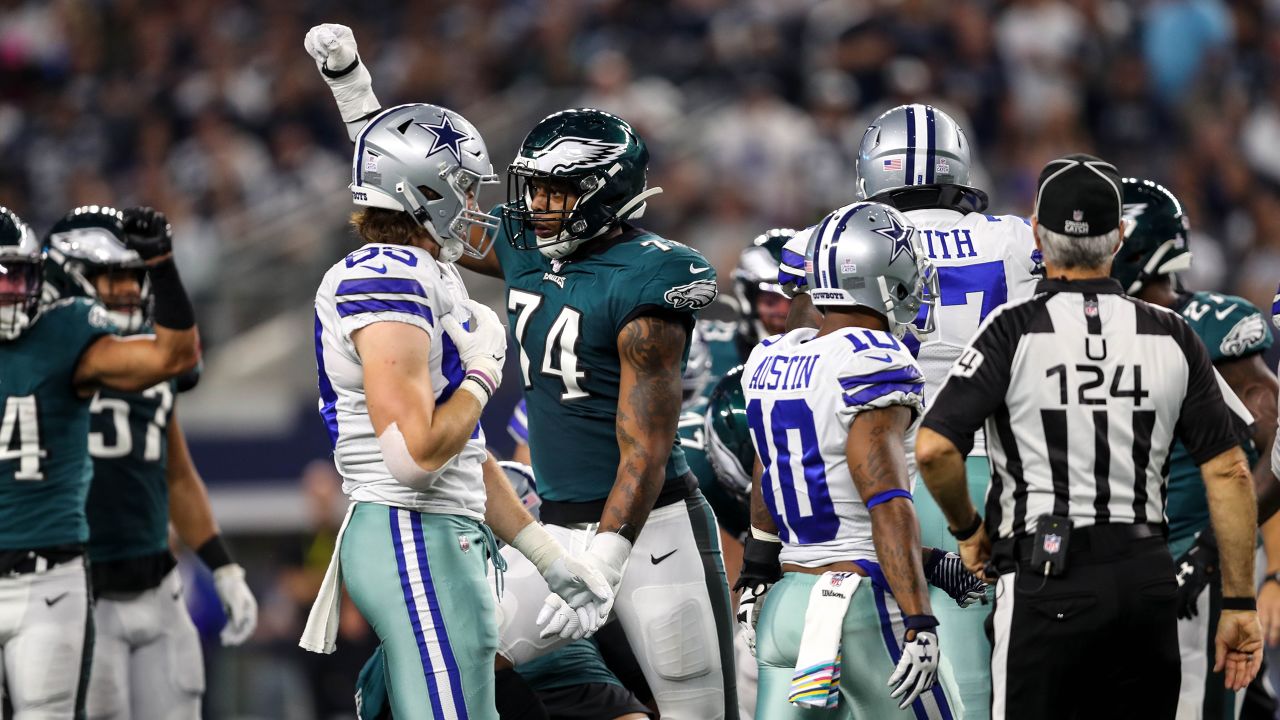 When you’re going bad, stuff starts happening you didn’t plan for… and that’s the way it is right now in Eagles nation.

One resultant side effect— the local, national and international sales figures for Eagles gear are down, way down… licensing income and royalties are suffering for the franchise. Combined sales of jerseys and other merchandise stalled out after the Vikings beatdown, and now after a sloppy loss to Dallas, sales will plummet this week. What’s it all worth to the team and its NFL partner which splits the income? Probably about a loss of about $2 million a week they expected to be netting after manufacturers, retailers and wholesalers got their cut—which of course affects the incomes of a lot of affiliated workers not related to the team or to the NFL.

The other side effect is a sudden renewal of interest in the 2020 Draft.

The Eagles made a series of roster moves on Monday evening. First, they agreed to sign defensive tackle Anthony Rush off of the Raiders’ practice squad. Then, to make room on the roster, they released cornerback Orlando Scandrick and defensive tackle Akeem Spence.

Later on Monday evening, the Eagles also added another rookie free agent defensive tackle off a practice squad as they agreed to sign Albert Huggins away from Houston.

This is just the beginning of a series of tryouts for younger talent. If the season continues its current swirling-down-the-drain trend, expect many more.

Suddenly guys like ~BROZ at Drafttek are super-relevant again. I mean, it’s only late October, but the time has come to consider the future. Not saying “full rebuild”, but pretty close to it…unless things change in a hurry.

2020 Big Board – Top 400
2020 Positional RankingsThe way things are going for the Birds, you can reasonably project their drafting somewhere in the 10-to20 range. I think that’s a fair range, because it allows for an increasingly unlikely late run for a wild card.

Whom is ~BROZ looking at right now for the Eagles? Well, he has to deal with these projections for teams who could be drafting ahead of the Eagles:

~BROZ currently estimates the Eagles will be drafting in the #17 overall slot. So he went shopping for defensive end talent:

“For reference’s sake, these comments/opinions are being written two days after watching this dork drop 333 YDS and 19 TDs on the Eagles’ secondary; therefore, if I come off somewhat jaded and angry please forgive me, as my intention was to come off VERY jaded and angry. The only bright side from this past weekend was getting to see LB/Idiot Zach Brown get fired after he decided it was a good idea to announce to the world that Kirk Cousins sucks right before the Eagles played the Vikings. Granted, most Vikings fans would probably agree with him, but Earth to Zach Brown: You suck too…(AND you’re unemployed). Another balm that provided instant relief to my wounds was seeing Dallas fall to the winless Jets…Ha Ha!

“I’ve resisted slotting CBs to the Eagles in RD1 the past two years because the Eagles have invested in a youth movement in their secondary, and the thought was they just needed time to mature. Welp, they’ve matured now…matured into a bunch of crappy corners. The Eagles finished 30th in pass defense last year, and currently are holding down the 29th position this year. Is it really possible that the best defensive back the Eagles have drafted in the last 10 years is freaking Jalen Mills? Go ahead and laugh at that statement…but then name someone the Eagles have drafted that’s any better.

“As far as this year’s draft goes, everyone’s impulse will be to scream for the Eagles to go Corner in RD1. Not me. I don’t trust them to pick a defensive back that high. If they want to trade their RD1 pick for an established CB that’s already proven he can play in the NFL, go ahead (although I’d rather they trade for a 2nd tier guy who’s less expensive). If they keep their RD1 pick, I’d rather they use it at a position they’ve had at least some success at. Aside from the Jets game, the D-Line isn’t wowing anyone this year, either.
– Broz, Eagles Analyst ”

So there is the opening shot on Draft Season. Perhaps it is telling that the Eagles FO is apparently as concerned with the defensive line’s future as is ~BROZ.