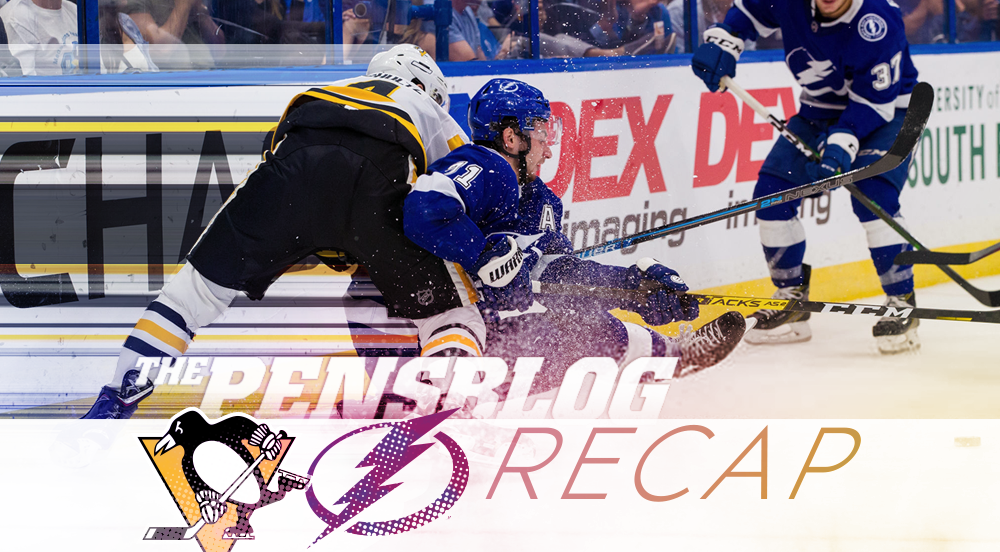 The Penguins continued their Florida vacation last night with a game in the Bay. Before the season started this game was probably circled as a heavyweight matchup on the calendar. Thanks to 69 injuries for the Penguins and a Tampa team that hasn’t recovered from the Columbus embarrassment both teams have been quieter than expected in the first 10 games of the season. Despite the injuries, the Penguins were entering this game playing better hockey than Tampa, which isn’t something you would believe if you only read social media. Tristan Jarry was announced as the starter which wasn’t a surprise. Adam Johnson was scratched late meanign the Penguins would once again have to use Jusso Riikola at wing.

I’ve seen some people comparing Sullivan using Riikola to Bylsma using Engelland on the wing. The difference is Bylsma chose to do this for his gameplan of grinding down, Sullivan is forced to do this because his boss can’t count.

Some Purple Heart receiving veterans were honored in a terrific pregame ceremony, NBCSN said some stuff, and the puck was finally dropped. It’s not that I don’t enjoy ceremonies, but why not list the game at 7:30, start the ceremonies then and that way the game still starts at 8? Anyways I am old and I digress. the game started with a little back and forth up to the first commercial break but nothing too threatening by either team.

After the timeout, it was more of the same. The Lightning started getting some good looks following a Penguin turnover. Jarry made a pair of stellar saves but eventually, the puck came from the point that was deflected behind Jarry and it was 1-0 Bolts.

Another goal following a turnover, it’s almost like it doesn’t matter who the goaltender is if you put them in situations to fail.

Whatever mojo the Penguins had to start this game, and that could be measured in the single digits, they lost following the tally. The next ten minutes were the Tampa Bay show and somehow the score was still 1-0 by the 5 minute TV timeout.

After the timeout an innocent puck to Jarry turned into a scrum between Gudbranson and Maroon, Maroon dropped his gloves first, Guds landed a punch and somehow that resulted in a roughing penalty to the Penguins. Tampa had some good looks early but the Pens PK was up to the challenge. Sam Lafferty had the best look on the powerplay with a 25-foot shorthanded breakaway that slid off Vaseline. The Pens killed the rest of the powerplay and with less than three minutes left we went back to 5v5.

Another scrum would break out, this time involving pretty much everyone on the ice. Tampa should’ve used some of this passion in the playoffs last year. By the time it was all sorted out the Penguins would get a powerplay as the refs basically just lost count.

The Pens would have possession for the next 90 seconds but missed the goal about 12 times and the period would end 1-0 with the Pens have about half a minute left on the advantage.

Numbers after the 1st ⬇️ pic.twitter.com/Osf8KmkQ0K

The Penguins wouldn’t get anything off the remaining thirty seconds of powerplay time, shortly following the advantage Tampa threw everything at Jarry and he made some huge saves to keep the game within reach.

Not long after this flurry Pettersson and Schultz continued getting carved like a jack-o-lantern as they were split by a pass the sent a man in one-on-one with a steady Jarry. To say Jarry was strong early in the second period would be an understatement.

Five minutes into the period the Penguins finally got a few good looks on goal but Vasilover was ready. Eventually, we cracked open a fresh Black and Tanev as he put on the razzle dazzle.

This is filthy. This isn’t a goal you take out for coffee on a first date. Hell, this isn’t even a goal you introduce to your parents. This is a just met in the bar, bought tickets to Vegas that night and getting married tomorrow type of goal.

Unreal play by Tanev, I cannot wait to see him on Malkin’s left.

The Pens continued pushing and the game finally opened up. Both goalies were playing well and turning away multiple chances both ways. It started to look like we would be heading into the third period tied before Crosby sent a puck up the boards to that winger who doesn’t score. Simon out-wills a Tampa defender along the wall and while falling makes a tape to tape pass to Crosby, who looked up and saw his baby boo standing pretty.

I’ve highlighted Guentzle’s ability to slide into position several times, but here he does it again. Just watch him in this clip. He starts out by supporting along the wall behind Simon, but he doesn’t stop moving. Once Simon wins the puck he just silently glides into position and he finishes. Almost every single goal Guentzel scores on a one-timer he gets into position without moving his feet, he just glides like a ghost and everyone misses him. Jake Guentzel is not a direct beneficiary of the Sidney Crosby effect, he is a legit 40 goal scorer. This chip play by Sid to open space showcases his excellent vision while Simon anticipating the pass and getting there first highlights his hockey IQ. Simon didn’t score this goal though so maybe it didn’t count? Through 9 games of playing together, this line has 9 goals (Guentzel 4, Crosby 3, Simon 1) and 15 assists (Crosby 6, Simon 5, Guentzel 4) at even strength. Averaging 1 goal and 2.66 even-strength points per game from your top line is a good place to start.

Neither team would score in the final minute, 2-1 Pens.

So far, so good. pic.twitter.com/wX4MVnKzTS

Without looking up the stats (can’t call me a fancy stat boy only) I feel like the Penguins have been a pretty solid third period team this year. Attempting to shut down Tampa’s offense while not having your best defenders in the game is a pretty tough task. The first five minutes were fine, but seven minutes into the period the Lightning finally took advantage of the Gudbranson-Johnson pairing.

Innocent play starting off, Johnson closes the space and makes a good hit at the top of the zone forcing the Bolts to dump the puck in.

In the image above it looks like Lafferty is going to properly cut in front of Jarry to take away a potential threat. He doesn’t do that and instead lackadaisically scoots toward Gudbranson, who doesn’t look over his shoulder before dropping the puck back.

Lafferty at this point has continued moving forward as if his controller was disconnected, tying up two Penguins behind the net. We see Johnson making a B-Line for the puck which is his usual prerogative, but we also see Blandisi staring off thinking about dinner.

The puck gets sent through the position vacated by Lafferty and later Blandisi to set up the goal. There isn’t enough blame to go around on this goal, every player mentioned in this breakdown made a mistake.

With the game tied neither team really backed down and we were treated to some pretty good hockey in October. 15 minutes into the period Zach Aston-Reese took a penalty that the team was able to kill. 46 seconds after the conclusion of that powerplay Guentzel was rung up hooking and the Bolts got another chance with 2:05 left. On the penalty kill, Kris Letang did a lot of moving around to prevent shots but eventually, the puck went to Hedman and he can shoot good.

People immediately jumped to blame Jack Johnson here, but we are an equal opportunity blog and sometimes it isn’t Johnson’s fault.

As you can see Jarry has a pretty good look at this puck on the way in as it went right for the skates of Palat who makes a nice play to avoid getting hit. Some people want Johnson to “get tough” here and hit Palat out of the way but that most likely creates more traffic in front, and Palat didn’t score. This is a tough goal late in the game after a marvelous performance by Jarry as having to kill off two straight penalties once again kills the Penguins.

The Pens would give a late effort and almost scored in the final seconds but it was ruled no-goal and that would do it.