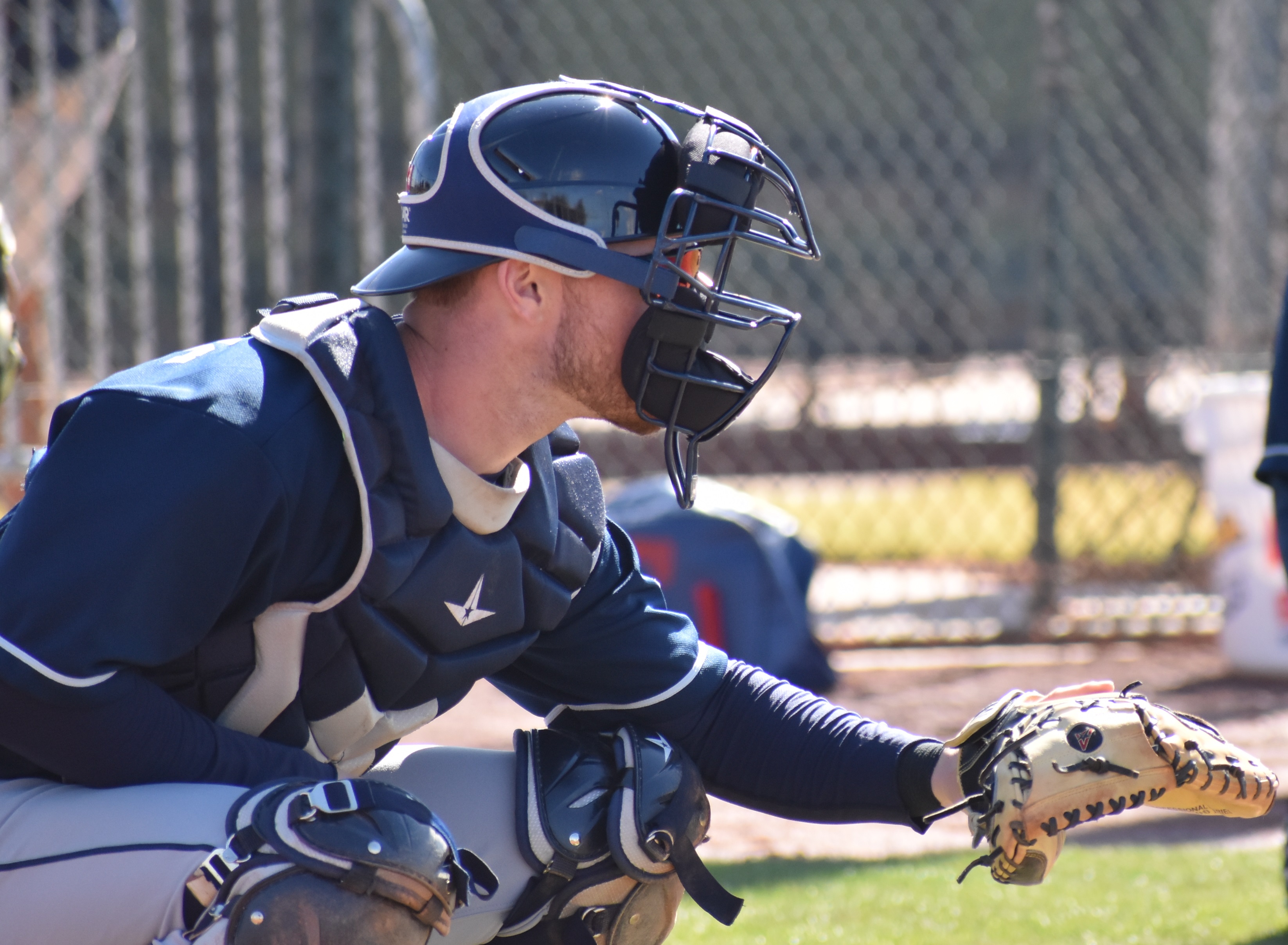 Gavin Collins was drafted as a catcher by the Indians out of Mississippi State back in 2016, but if you watched him play that year, you wouldn’t know it. Playing his first year with the Mahoning Valley Scrappers, he made all of his 41 starts at third base, then made 69 of 76 defensive starts at third during the 2017 season between Lynchburg and Lake County.

Through this point of his career, Collins had solid offensive numbers, even in high A at 21 years old, but he was held back in Lynchburg for the 2018 season as he was finally converted back to catcher. While I didn’t see much of Collins at third base early in his career (essentially a bit in instructs in 2016 and extended spring in 2017), but his numbers at third defensively were not good. He had a .867 fielding percent in his rookie season with a 2.30 range factor per nine, then better numbers his next year at .906 and 2.49 respectively.

Not only did Collins improve from one season to the next, but he continued to improve defensively at third in 2018, despite splitting time there and behind the plate. While it was the season with the least amount of time played at third, he increased that fielding percent to .932 while increasing his range again to 2.55.

As this was happening, however, Collins’ offensive production dropped significantly. After hitting .272/.340/.481 in 2017, he dropped to .229/.286/.384. While some of this is due to the fall of his BABIP from .361 to .270, that doesn’t explain the nearly 100 point drop in slugging percent. In addition, his walk rate dropped, although his strike out rate dropped significantly as well. It’s possible that this lack of production stemmed from the relearning of a difficult position at an advanced minor league level.

Due to his struggles at the plate rather than his defensive issues, Collins spent his third season in high A in 2019 where he saw his BABIP rise back to expected levels (.286), but his line was just .262/.325/.395, not near the level of his first season in high A. Now, instead of being one of the younger players at the level, he was one of the oldest.

In addition to offensive issues, the Indians finally decided to pull the plug on Collins at third and tried him out at first for about half the season. Now in Arizona, however, it appears that this experiment has also ended and he is exclusively a catcher.

Collins played a career high 100 games in 2019, so he didn’t head to the Arizona Fall League out of lack of use. Instead, he needs to get himself over the hump and into AA for his career to continue. Playing in a mixed league against those from high A to AAA could be the boost he needs for such a jump.

Things certainly didn’t start off well for Collins in Mesa as he had just two hits and two walks in his first six games. With the exception of 2017, Collins has been fairly decent at avoiding strike outs, but he has struck out in nearly 22% of plate appearances in fall ball with just three walks in his first 33 plate appearances. Especially early on in the season, he seemed to be too passive at the plate, often falling behind in the count and being unable to dig himself out of the hole.

Starting on October 10th against the Salt River Rafters, things turned around a bit. He hit his first (and only) home run of the season that day, then added two hits and a walk in a pair of games on the following weekend. The home run and double hit from the 10th on mark 2/3rds of his fall extra base hits.

Defensively, he has caught 33% of base stealers this fall and nabbed 42% during the regular season, but is not particularly adept at blocking balls in the dirt. With such a good arm behind the plate, it’s easy to ignore the passed balls and wild pitches. This doesn’t make up for his offensive issues, however.

Collins sets in to warm up the Solar Sox pitchers during the 2019 AFL season. – Joseph Coblitz, BurningRiverBaseball

Collins came to the Indians at a time when the farm system was nearly devoid of catching talent and, while that has been remedied in recent seasons, that situation remains intact at the upper levels. At the moment, Eric Haase is the only real MLB possibility between high A and AAA with Li-Jen Chu likely to be his back-up in Columbus in 2020. This essentially clears out Akron of catching talent and Collins should be able to start there next year. Since he has not made an impression this fall, that could be his last chance to do so in an Indians uniform.

While the farm was once devoid of catching talent, directly behind Collins now are Bo Naylor and Bryan Lavastida, both potentials for Lynchburg next year. Behind them are Yainer Diaz and Michael Amditis and all four bring both offensive and defensive potential to the position. With the youth breathing down his neck and already heading into his fifth minor league season, Collins will have his work cut out for him in 2020 after squandering his chances this fall.