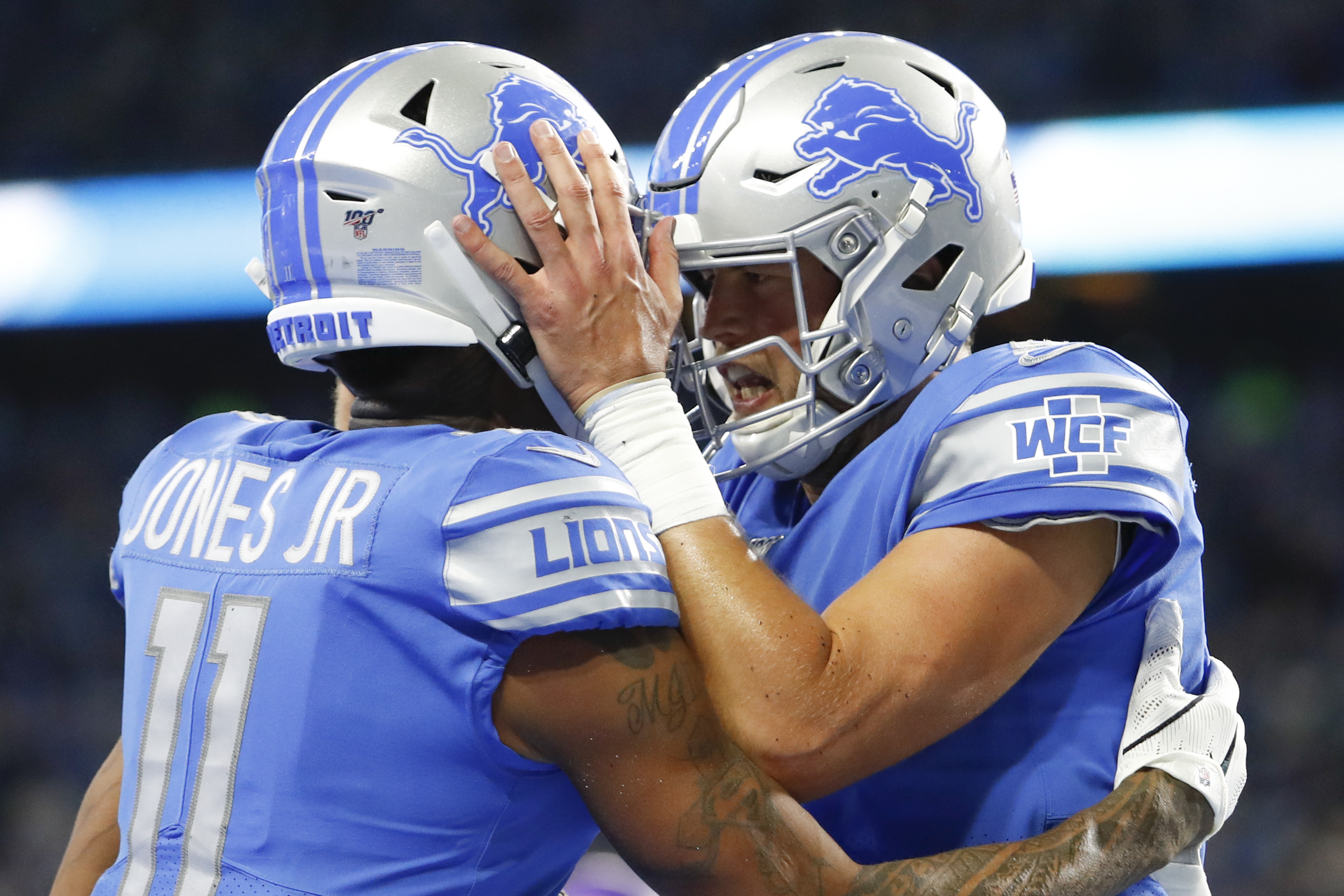 The season  for the Detroit Lions hangs in the balance this week. After losing three straight games, their once promising 2-0-1 start seems like a thing of the past.

But fortunately for the Lions (2-3-1), they welcome the New York Giants to the Motor City on Sunday.

The Giants (2-5) have also lost three straight games and have struggled since replacing Eli Manning with rookie Daniel Jones at quarterback. Even though Jones has led New York to both of their wins, his stats have not been promising.

He showed flashes of excellence in his first career start at Tampa Bay, when he led the Giants to a 32-31 win by accounting for four touchdowns and 364 yards. But he has been turnover prone since then. Jones has 12 turnovers on the season (seven interceptions and five fumbles) and has more INTs than TDs in two of those four starts after his Week 3 heroics over the Buccaneers.

His QB counterpart, Matthew Stafford, has been the opposite, but cannot lead his team to victories. Stafford has thrown for 13 touchdowns and only three interceptions on the year and has accrued the 5th best QBR in the league with a 67.3.

He is leading the 13th highest scoring team in the NFL at 24.8 points per game. Every other team, besides Tampa Bay, who is giving up a third worst 30.8 points per game, that is ahead of the Lions in scoring average has a winning record so far on the season.

All of that has gotten Stafford and the Lions a below-.500 record and a last place spot in the NFC North through seven weeks.

It won’t be getting any easier for Stafford and the Detroit offense as starting running back Kerryon Johnson was placed on injured reserve earlier in the week due to a knee injury. Rookie Ty Johnson, a sixth round pick out of Maryland, should take over the lead role in Johnson’s absence.

But the main culprit for the Lions shortcomings has been the play of their defense. They are tied with the Giants for 26th worst in the NFL for points allowed per game at 26.7. Kirk Cousins and the Minnesota Vikings just left Ford Field with a 42-30 win last week by putting up 503 total yards on offense.

Detroit will also be down a few key pieces on the defensive side of the ball.

They will also be without starting safety Quandre Diggs, who was traded to Seattle earlier in the week in a shocking move that was not expected by anyone outside of the front office. Diggs, a team captain, will likely be replaced by rookie safety Will Harris, who was drafted in the third round out of Boston College.

This could be the break that the Giants offense needs. While they will be without wide receiver Sterling Shepard (concussion), they still have weapons. Saquon Barkley is one of the best running backs in football and although he has missed three games due to an ankle injury, is still averaging 5.6 yards per carry and is a highlight reel waiting to happen. Evan Engram is one of the most prolific tight ends in football and is leading the team in targets, yards, receptions and touchdowns.

New York also has former Lion Golden Tate, who has got to be itching to go against the team that traded him last year, on their side. He has produced since returning from a four game suspension to start the season. In three games, Tate has 15 receptions for 195 yards and a touchdown to give Jones a reliable slot option.

While Detroit has struggled on defense and New York has weapons on offense, I think the same could be said for New York’s defense and Detroit’s offense. It is a rookie quarterback versus an eleven year veteran. A team that is turnover prone versus a team that protects the ball rather well. I believe this is a game that can get the Lions back on track.

While their loss last week put them in a significant hole and hurt their playoff chances tremendously, I believe a win here can have a snowball effect and they might be able to rattle off three or four straight wins due to a soft part in their schedule. Stafford will outplay Jones and Detroit’s defense will force the rookie into a couple more turnovers.

The Lions will win this one in convincing fashion and end their losing streak while the Giants slide will continue and hit four consecutive losses.