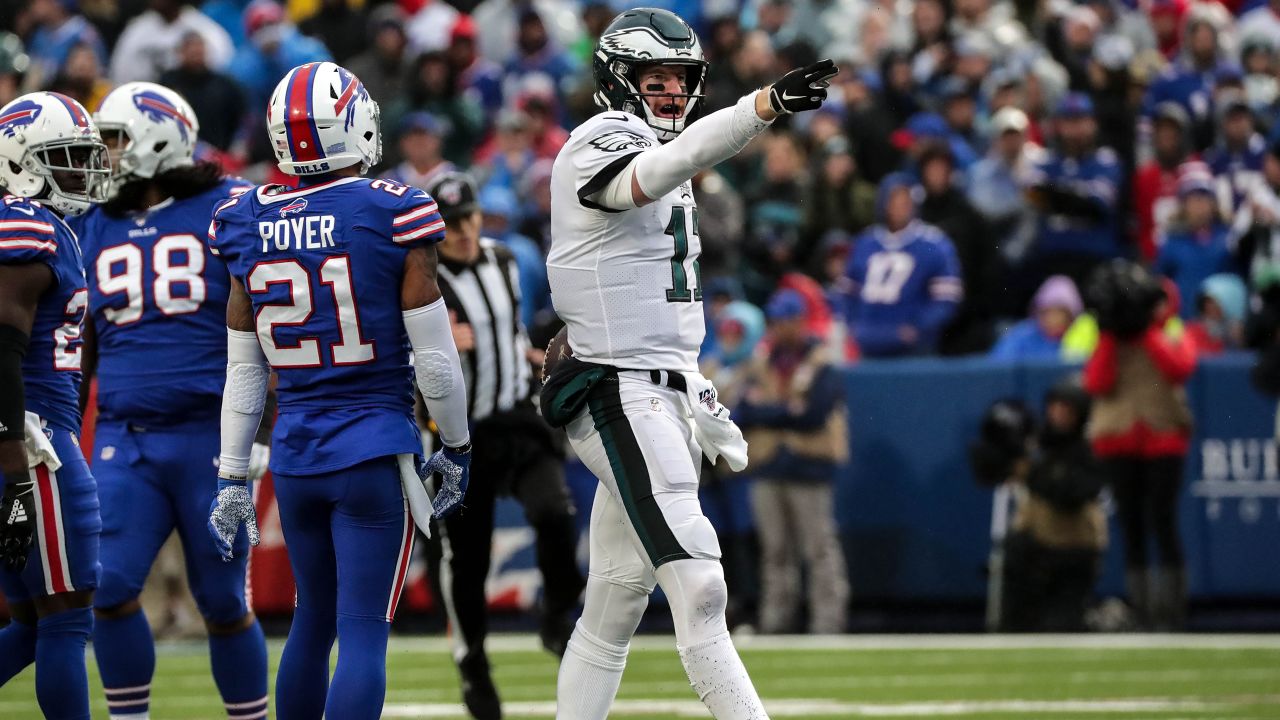 Windy conditions at New Era Stadium in Buffalo (25 mph constant) may have influenced the Eagles’ game plan on offense. If so, the Birds drifted in the right direction.

Oh that ball-control clock-eating run game! Our linemen loved it. Our screen game came alive too. Our defense got to cheer from the sidelines for eight minutes of rest on one series. Best of all, our QB was finally unchained from a shotgun/pistol pocket to create plays based upon his own running ability and his vision from under center on play-action pass plays.

Glorious relief to this fan, who along with Don Pardo has been itching for the running game featuring Jordan Howard to become the centerpiece of this offense. What you find out is you can wear down defenses, even good defenses like Buffalo’s, by charging on the backs of an athletic offensive line. We may not have the best pass-protect linemen in the league, but we are the most athletic line in the NFL. And our guys love to run-block. If they had their way, every play would be a run call.

Lane Johnson isn’t sure what the Eagles proved except to silence their critics for one week after their run game and defense trampled the Buffalo Bills.

“What are we, 4-4? It looks like we’re average,” the starting right tackle said, injecting a profanity into his comment for emphasis. “We needed a damn win. That’s really what it all boiled down to. It felt good to get one.”

Having spent the past week listening to how awful and soft they were following a 37-10 loss at Dallas, the Eagles responded by snapping a two-game skid with a 31-13 win on the road and against a Bills team that dropped to 5-2.

Rookie Miles Sanders scored on a 65-yard run, one of Philadelphia’s three touchdowns rushing, on a wet and windy afternoon in which the Eagles finished with 218 yards rushing.

Linebacker Brandon Graham keyed a stifling defensive effort by forcing and recovering a fumble, while adding one of Philadelphia’s four sacks.

“It was a lot of stuff that tried to distract us from this game this week. There was a lot of things we were still trying to answer for,” Graham said, referring to former cornerback Orlando Scandrick’s questioning the team’s leadership after being released on Monday.

“Everybody knows our stuff whatever it is, so let’s go out and change the way people view us,” Graham added. “Now we’ve got a clean slate.”

And now it’s the Bills’ turn to face questions about being for real, or whether they’ve benefited from an easy season-opening schedule.

AFC-leading New England was the only one of Buffalo’s first six opponents entering this weekend with a winning record. And the Bills raised concerns after they needed to rally from a five-point fourth-quarter deficit to beat the winless Miami Dolphins 31-21 last week.

“I don’t know if it’s a wakeup call,” said Bills receiver Cole Beasley, who scored on a 14-yard catch. “I mean, we’ve known that already. We didn’t put together many good quarters today.”

On the second snap from scrimmage in the third quarter, Sanders followed Howard’s block of linebacker Matt Milano in bursting up the left sideline. The second-round draft pick celebrated his touchdown by leaping into a group of Eagles fans in the northeast corner of the endzone’s stands.

After Devin Singletary scored on a 28-yard catch on Buffalo’s next possession, the Eagles responded with Wentz overseeing a six-play, 68-yard touchdown drive capped by Boston Scott‘s 4-yard touchdown run.

“I think it’s just a step in the right direction, for those guys to step up and kind of take ownership,” coach Doug Pederson said. “Listen, being a leader is not about being perfect, and everybody made mistakes. But they owned it. They stepped up and really led today.”

The Eagles defense limited Allen to go a combined 3 of 13 for 9 yards over Buffalo’s final six possessions following Singletary’s touchdown.

“They punched us in the mouth, and we have to answer a little better than that,” Allen said.

On defense, Buffalo allowed the most yards rushing since giving up 273 against New England on Dec. 23. And Buffalo had not surrendered three touchdowns rushing since allowing three in a 2018 season-opening 47-3 loss at Baltimore.

“It was frustrating because it starts up front,” defensive end Shaq Lawson said. “We have to do a lot better, myself included.”

Nice to hear that from the opponent for a change…

INJURIES:  Eagles: Sanders left the game in the third quarter with a bruised shoulder. X-Rays were negative. Sanders said he expects to play next week against Chicago.

Alshon Jeffery showed some discomfort in his right arm and rib cage after taking a beating on a sideline hit. He stayed in the game but was clearly playing through some pain.

Bills: Starting RT Cody Ford was escorted to the locker room with five minutes remaining due to an elbow injury. CB Levi Wallace (undisclosed) left the game as well.

BUF
J. Brown5 REC, 54 YDS
Don’t think I’m jumping the gun, so to speak, but this offense is just better from under center with the pass predicated upon a primary running game already in place. The coaching lesson is you should modify your offense to the skill sets of the players you have, and not the other way around. And don’t worry about being called old-fashioned—winning never gets old.