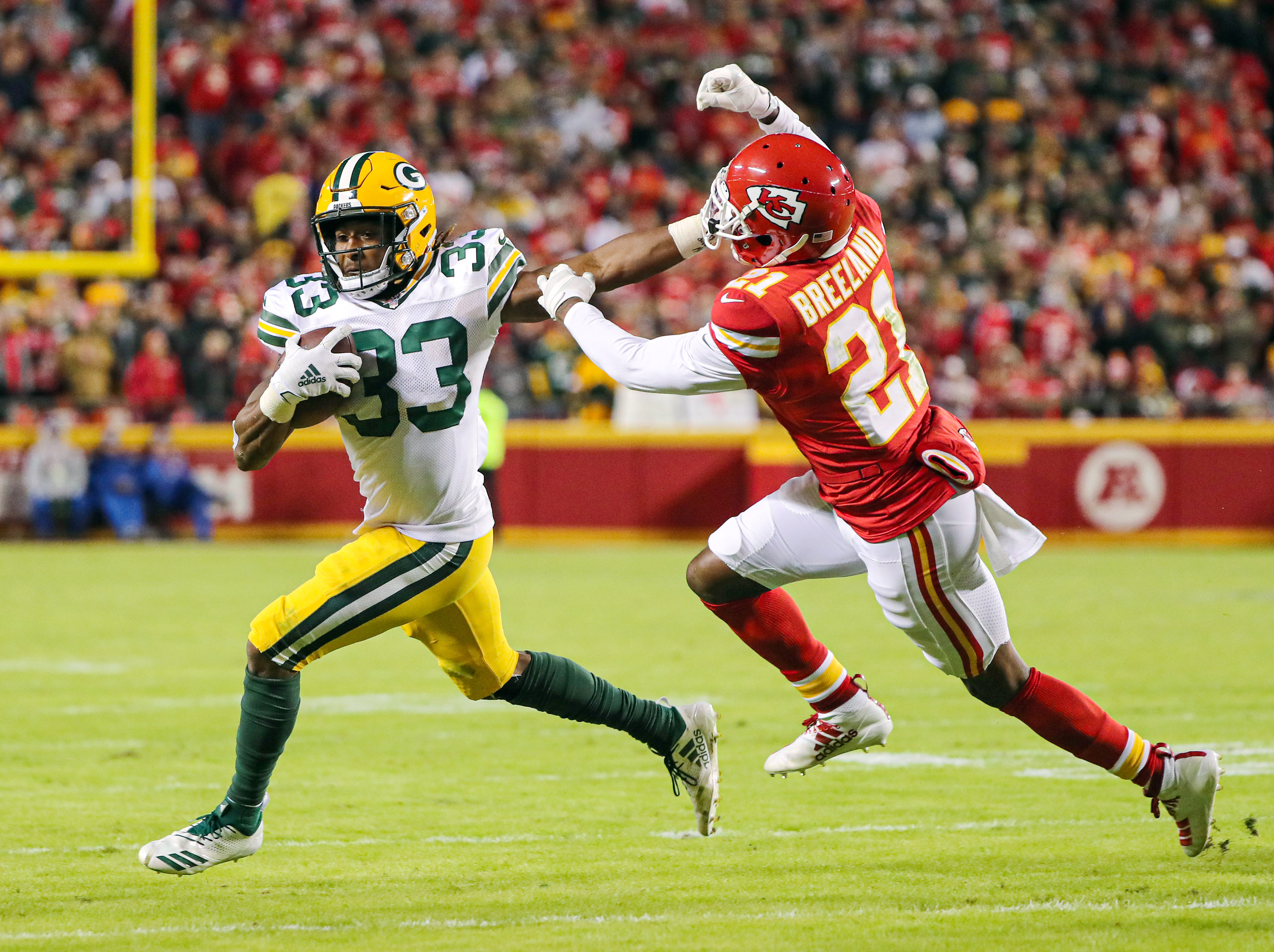 The Green Bay Packers improved their record to 7-1 at the halfway mark of the 2019 season as they defeated the Kansas City Chiefs 31-24. Aaron Rodgers threw for 305 yards and three touchdowns while Aaron Jones rushed for 67 yards and caught seven passes for 159 more yards and two scores to lead the Pack to victory.

Green Bay took an early 14-0 lead, but the Chiefs rallied in the second quarter behind backup quarterback Matt Moore and were ahead 17-14 at the half. Green Bay converted a key turnover in the third quarter which proved a turning point in the game.

Here are 10 things we learned from the Packers 31-24 win in Kansas City:

Once again, the Green Bay offense was very effective on their scripted plays to open the game. The Pack mixed runs and passes well and scored two quick touchdowns. Not only did the Packers move the ball, but they didn’t get discouraged when penalties or overturned touchdown calls set then back. Despite the difficulties, the offense worked well and scored twice to give the team a quick early lead.

Unfortunately, once the scripted plays were over, the offense stalled for most of the second quarter as Kansas City blitzed and forced Rodgers to rush his passes. The offense stalled and did not play well for the rest of the first half but was able to adjust and be successful in the second half.

2. Matt LaFleur Is Learning How to Make In-Game Adjustments

The duo of Matt LaFleur and Aaron Rodgers is working extremely well together to make adjustments to the offense and find the open receiver. Without Davante Adams in the lineup, LaFleur exploited the mismatch of running back Aaron Jones on the Chiefs linebackers. The defenders simply couldn’t keep up with Jones and the result was a seven catch, 159-yard receiving day for the Packers top running back.

Rodgers sees the field well and extends plays to find the open man. Meanwhile, LaFleur was able to adjust his scheme and play calling to create mismatches that led to big plays like Jones’ 67-yard, game-winning touchdown catch in the fourth quarter.

The Packers top running back now leads the team in receptions with 34 at the halfway mark of the season. Anybody who watched Jones as a rookie remembers how much he’s improved as both a receiver and a pass blocker. Credit Jones for his hard work and dedication and LaFleur for exploiting Jones’ speed and elusiveness to create opportunities for the UTEP alum.

Jones now has three receiving touchdowns and his first career 100-yard receiving game. After watching him this season, you get the feeling it won’t be his last.

4. Allen Lazard Continues to Be the Team’s Most Reliable WR

Marquez Valdes-Scantling has speed, but Rodgers still hasn’t figured out how to consistently utilize MVS for more than one or two big plays per game. Jake Kumerow shows flashes but also disappears for long periods of time.

As of now, until Adams returns, Lazard has turned himself into Rodgers’ preferred target among the wideouts.

5. The Packers Time Management Late in the First Half Was Atrocious

The Packers had a chance to get some points on the board in the final minute of the first half after the Chiefs kicked a field goal to take a 17-14 lead. Unfortunately, the offense was terrible at time management and the opportunity was squandered.

First Jimmy Graham failed to get out of bounds on the second play of the drive. Graham didn’t pick up a first down and although the Packers had a pair of time outs left, they didn’t call one here.

The offense then took a very long time to get the next play off, wasting another 15-20 seconds.

Then, one play later, Rodgers scrambled trying to extend the next play before deciding to run the ball himself which brought the clock down to just three seconds. In 54 seconds of play time, the Pack gained only 14 yards, failed to advance the ball and went into the locker room down 17-14. This is something the team must improve upon in the future.

6.  The Defense Continued to Bend but Not Break

Statistically, the Green Bay defense was pretty good against Kansas City, allowing 337 total yards, a respectable total against the high-powered Chiefs offense. Obviously, the home team was playing without their franchise quarterback in Patrick Mahomes. After a slow start, Matt Moore played well enough to give his team a chance to win the football game.

Green Bay’s defense struggled in the second quarter but came up with a key turnover late in the third quarter when Tyler Lancaster forced and recovered a fumble by LeSean McCoy. The Packers took over at the Kansas City 27 and converted that drive into a three-yard touchdown pass to Jamaal Williams which gave the Packers a 24-17 lead.

The Packers defense changed things up in the fourth quarter and did a better job of pressuring Moore and forcing hurried throws. Mike Pettine also adjusted the defense to prevent the Chiefs from flooding an area of the field against the Green Bay zone which worked so well in the second quarter.

Za’Darius Smith had another productive game with two quarterback sacks, although the Green Bay pass rush was not very consistent for the second week in a row.

Overall, the defense played respectably and made some key stops when it mattered most in the fourth quarter.

7. Aaron Rodgers Was Lights Out Again

Just when you think the defense has figured out Aaron Rodgers, he comes up with a huge play that reminds everybody that he’s still one of the greatest quarterbacks to ever play this game.

Rodgers’ touchdown pass to Jamaal Williams in the corner of the end zone was spectacular. Somehow, Rodgers managed to throw the ball with pinpoint accuracy where only his receiver could reach it while he was off balance and under pressure.

Rodgers picked up a key first down early in the game on another spectacular pass to Kumerow that looked almost impossible to complete.

The Packers QB finished the game 23-of-33 for 305 yards and three touchdowns while “only” accumulating a quarterback rating of 129.0, a big drop off from last week’s perfect QB rating of 158.3. He also ran the ball effectively, gaining 29 yards in six carries which included three kneel downs for minus-three yards at the end of the game.

Rodgers is still Rodgers and that gives the Packers a chance to win almost every game.

8. The Offense Ran the Four Minute Drill to Perfection

Green Bay held a 31-24 lead and got the ball back at their own two-yard line with 5:04 left on the clock. The Chiefs still had all three time outs remaining and if they stopped the Packers quickly, could get the ball back in excellent field position.

But Rodgers and the offense never let Kansas City get the ball back. The Packers picked up three straight first downs including two key third-down conversions that forced the Chiefs to use all three of their timeouts on defense.

Aaron Jones ran the ball extremely well at a time the Chiefs knew he was going to get the ball and the offensive line did a very good job of opening holes in the clutch. Green Bay ran out the remaining clock and secured the victory.

The Green Bay offensive line dealt with injuries throughout the game but still managed to get the job done. Both starting tackles, David Bakhtiari and Bryan Bulaga were sidelined at various times due to injuries, but they toughed things out and returned to action.

Backup tackle Alex Light had to play both left tackle and right tackle at different times during the game, but Light did a good job filling in and the offense didn’t really miss a beat. Corey Linsley and Elgton Jenkins also made some very good blocks tonight.

Yes, Rodgers was sacked five times, but part of that was his habit of trying to hold on to the football and extend plays. Overall, the offensive line did a good job of opening holes for the running game, blocked well on short passes and screens and came up big late in the game when it counted most.

10. The Secondary Stepped Up

The Green Bay pass defense had a big challenge against Kansas City facing the speedy Tyreek Hill, the experienced Sammy Watkins and arguably the most dangerous tight end in the game in Travis Kelce. Yes, Hill caught six passes for 76 yards, but his long gain of the game was just 21 yards and the Pack didn’t let Hill beat them deep.

Kelce was more effective, and the Chiefs should have gotten him the ball more often. He finished with only four receptions on the game for 63 yards and a score.

The Packers were very happy to get Darnell Savage back in the lineup and the rookie safety made seven total tackles. Chandon Sullivan broke up a key pass in the second half and Adrian Amos made some textbook tackles.

Jaire Alexander and Kevin King played well and didn’t allow the Chiefs many big plays in this game.