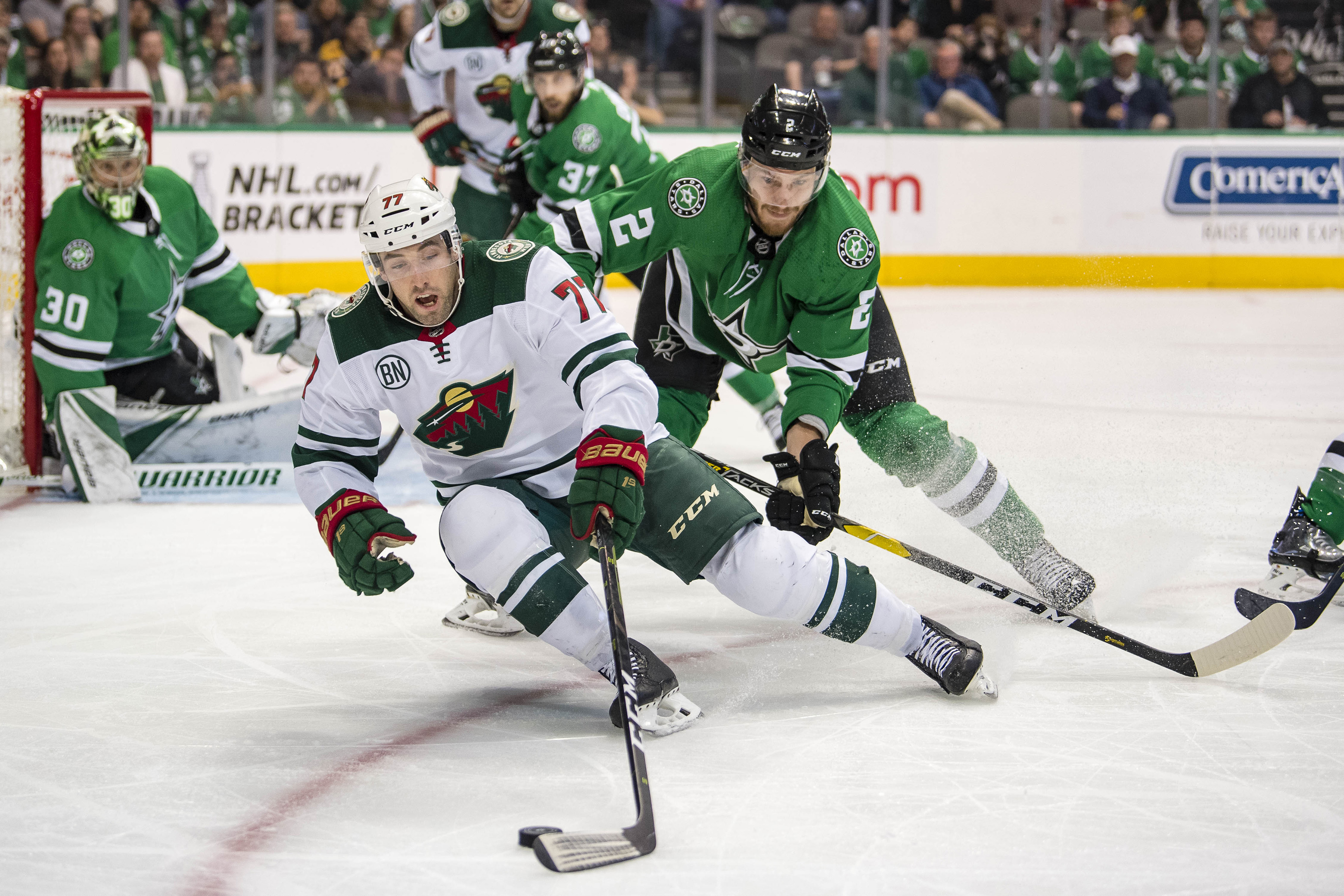 Another week, another road trip.  Last season, the team demonstrated they could win on the road but not at home.  So far this season, the Wild have struggled away from the friendly confines of the Xcel Energy Center.  Minnesota faces another team going through its share of struggles so far in the Dallas Stars who have massively underachieved from the expectations they had after making the playoffs a season ago and its subsequent activity in free agency this summer.

Minnesota needs to turn its home success into victories on the road and it should have a decent opportunity to do just that against Dallas, even if it is a place where the Wild have traditionally had its share of struggles.  Can the Wild earn a big road victory and continue to climb their way out of the Central Division basement?

1st Period Thoughts:  The Dallas Stars had great energy to start the game which wasn’t a big surprise after the team held a ‘players only’ meeting of its own after its most recent loss.  Dallas had great speed through the neutral zone but Minnesota stayed calm and looked for a chance to counterpunch and they’d get their chance a few minutes in as Eric Staal chased down a puck in the Stars’ zone and he’d set up Jason Zucker for an easy chance from in close that he hammered by Ben Bishop.  1-0 Wild to stunned silence from the Dallas crowd.  Minnesota continued this counterpunching style, waiting for the Stars to get overcommitted in the Wild’s end of the ice and then attack back via the rush as Staal gave a drop pass to Jonas Brodin who stepped into a slap shot that was nabbed by Bishop.  The Wild was doing a nice job of controlling the pace of play.  Dallas tried to answer back with some pressure of their own as Jamie Benn fired a shot from the perimeter that was gloved by Alex Stalock.  The Stars would receive the first power play of the game as Jordan Greenway was tagged with a high sticking call.  On the power play, the Stars were using a veteran group but Stalock was sharp as he worked hard to see pucks through traffic.  Corey Perry would get tired of jousting with Marcus Foligno and he’d cross check the Wild forward to negate about half of the power play.  Minnesota would have a short power play, but they were not able to create much in the way of shooting opportunities out of it.  The Wild continued to apply pressure as Zach Parise redirected a Matt Dumba shot that was covered up by Bishop.  A few minutes later the Wild would get its first full power play of the game as Radek Faksa tripped up Ryan Donato.  The Wild would take advantage of the power play as Staal worked a give-and-go with Mats Zuccarello who made a spinning pass near the wall that drew two Stars players towards him making a nice lane for Staal who ripped a shot by Bishop.  2-0 Wild.  Jared Spurgeon would trip up Tyler Seguin late in the period giving Dallas a power play.  Minnesota’s kill was superb, forcing turnovers as they entered the zone and clearing it out of their end with ease to a smattering of boo’s from the sparse home crowd.  With a little under 50 seconds left on the Dallas power play, the boo’s rained down again as the period ended with Minnesota holding a 2-0 lead.

2nd Period Thoughts:  Dallas would start the period with Anton Khudobin between the pipes in place of Bishop.  Minnesota’s penalty killers did a decent job of forcing Dallas to settle for a perimeter shot from John Klingberg and they would get an early kill.  The Stars would then take a ‘too-many men’ penalty which drew some more boo’s from the frustrated home fans who were growing tired of Dallas’ mental mistakes.  Dallas’ penalty kill did a decent job at giving Minnesota’s power play little in the way of time and space and the Wild were unable to get set up and comfortable in the offensive zone.  At times the Wild looked a bit careless and discombobulated in its own end as the Stars tried to raise their physical level as Roope Hintz leveled Dumba who was trying to protect the top of the Wild crease.  Stalock could sense the importance of a possible 3rd goal, and he’d make a long outlet pass to Zucker who had a step on the Stars’ defense but his wrist shot would miss just wide of the mark.  A few minutes later as the Wild controlled the pace of play, Minnesota would draw the ire of Dallas and Faksa would two-hand chop Joel Eriksson Ek to the ice for an easy tripping call.  On the power play, the Wild would add to its lead as Minnesota got the Stars to chase them around their end and quick little pass by Spurgeon set up Ryan Suter for a slap shot that he blazed by Khudobin.  3-0 Wild.  Dallas would try to cut into the Wild lead with some sustained offensive pressure in the last few minutes of the period as they swarmed in the Minnesota end.  Stalock was solid, making a bunch of quality saves and the Wild were kind of playing rope-a-dope and you would see the scrums after the whistle as Dallas was really frazzled at this point in the game.  Stalock would made a great stop and Jamie Benn would pounce on the Wild goalie and not be penalized for it which drew the ire of Luke Kunin who cross-checked Dallas star center.  Dallas would continue to attack and their persistence would be rewarded as Alexander Radulov swept up a puck in the slot and fired it by Stalock.  3-1 game which awakened the slumbering sparse crowd to a limited degree.  Minnesota would try to answer back in the closing seconds of the period as Suter sent a sharp angle shot that Khudobin gloved before Eriksson Ek could pounce on the rebound.

3rd Period Thoughts:  Dallas picked up where they left off in the 2nd period, swarming all over the Minnesota end early and often.  Stalock found himself under siege as the Stars kept winning all of the small races for loose pucks and sending just about any shot they could on goal.  A tripping penalty on Jonas Brodin would open the door by giving Dallas a much-needed power play.  On the man advantage, the Stars would cash in as a point shot by Radulov drew a rebound which was backhanded home by Hintz.  3-2 game and the limited crowd was now sensing their team was on the verge of completing its comeback.  Wild Head Coach Bruce Boudreau had seen enough and he chewed out his club for their passiveness to start the period.  The timeout helped die down some of the building crowd noise and the Wild seemed a bit less frantic than they were during the first 5 minutes of the 3rd period.  Yet the Stars were patient and a turnover near the Dallas blueline by Carson Soucy led to a counter attack as Joe Pavelski set up Miro Heiskanen for a pretty little redirect by Stalock.  3-3 game.  The Wild just stopped skating and the Stars kept swarming all over the Minnesota end as they couldn’t clear the zone to save their lives.  Radulov sent a puck on goal and the puck would deflect off Brodin’s leg and by Stalock.  4-3 Dallas.  Minnesota couldn’t seem to get out of its own way.  A “too many men” penalty by the Wild put its chances of tying the game on the ropes.  The Stars were more than content to play it safe and kill some time the Wild could ill-afford to lose.  Dallas was almost toying with the Wild late as Seguin passed the puck to Denis Gurianov who couldn’t find the puck in his skates on what looked to be a great scoring chance.  Stalock would come up with a few saves to keep his team within one goal.  After the kill the Wild would be forced to chase the puck around its own end as the Stars’ forecheck gave Minnesota trouble.  Eriksson Ek made a nice solo rush into the Dallas zone as he fired a shot that Khudobin stopped and then was unable to swing a wrap around attempt on goal.  A bad turnover by Zucker who handed the puck right to Jamie Benn who moved in and set up Seguin for an easy tap in.  5-3 Dallas.  Radulov would bury one more on an empty net to get a hat trick and give Dallas a 6-3 win.  Ouch.

~ Attendance was 17,756 at American Airlines Arena.

F – Nikita Nesterenko (Chilliwack, BCHL) ~ the Boston College commit had a goal in the Chiefs’ 6-3 win over the Surrey Eagles on Sunday.  Nesterenko has 3 goals, 12 points, 15 PIM’s in 16 games.