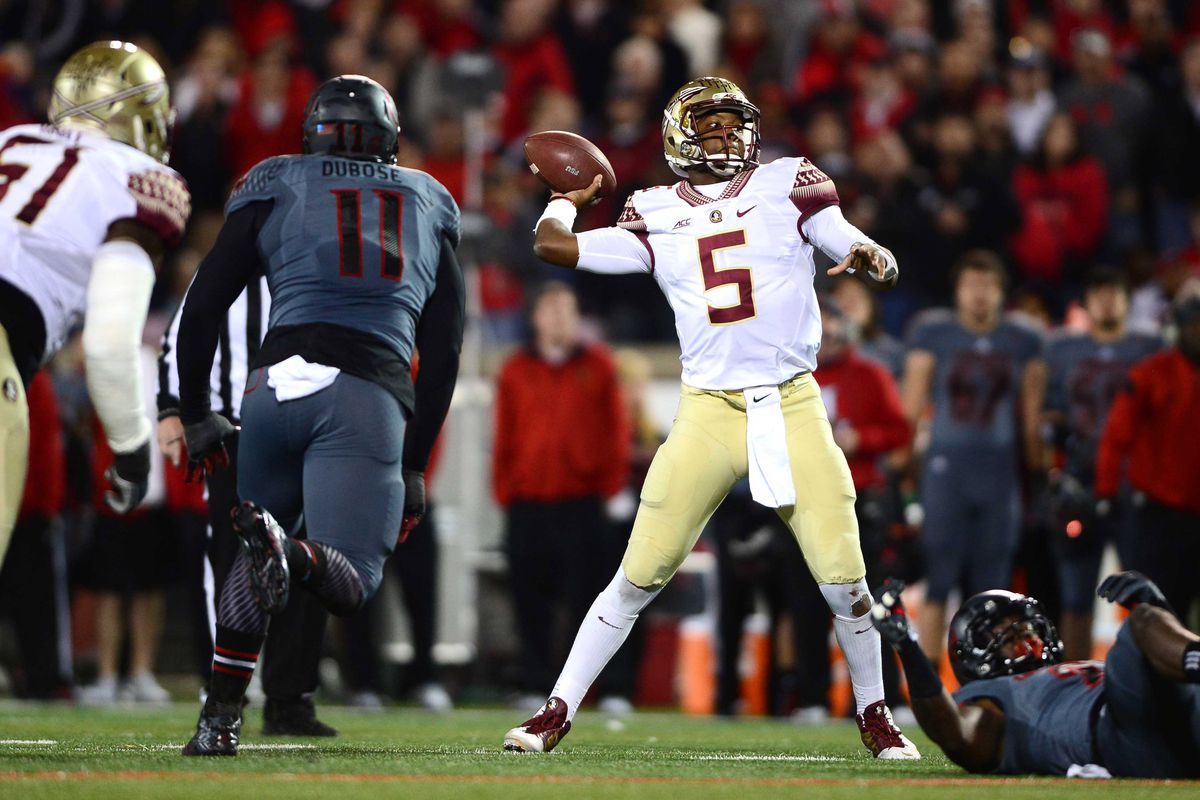 The 2014 season for Florida State ended on a sour note, but was a splendid one nonetheless. The season featured a number of nail-biting and comeback victories, but perhaps none were more improbable than the one that took place on this day five years.

The reigning national champion Seminoles were ranked No. 2 in the country and at 7-0, had won 23 straight games dating back to 2012. On the eve of Halloween, FSU would get quite the scare from No. 25 Louisville, but rallied from three touchdowns down for a thrilling 42-31 Thursday night victory on Oct. 30, 2014.

After a scoreless first quarter, Louisville jumped in front 21-0. Michael Dyer scored on touchdown runs of four and 12 yards before Will Gardner found tight end Gerald Christian for an 11-yard touchdown. The latter two of those touchdowns followed interceptions from FSU quarterback and reigning Heisman Trophy winner Jameis Winston.

With a little bit of luck, the Seminoles got on the board in the final minute of the first half as tight end Nick O’Leary fell on teammate Karlos Williams’ fumble in the end zone. Winston would throw his third interception on the first play of the second half, but following a Louisville field goal, things finally came together for the FSU offense.

The next two scoring drives for FSU would total 154 yards and take just eight total plays. After a 68-yard touchdown pass from Winston to wide receiver Travis Rudolph pulled the Seminoles to within 10, freshman running back Dalvin Cook scored the first rushing touchdown of the night for FSU on a 40-yard run.

The usually reliable Roberto Aguayo missed a 41-yard field goal attempt that would have tied the game for FSU late in the third quarter, but on the next possession, the Seminoles finally went in front. Winston was able to squeeze a bullet into tight coverage to Ermon Lane, who weaved and broke tackles on his way to a 47-yard touchdown with less than 13 minutes to play in the game.

Shell-shocked and trailing for the first time, the Cardinals didn’t panic. With the help of a 51-yard pass from Gardner to DeVante Parker, it took Louisville just six plays to go back in front. Dyer’s third touchdown of the night — a 1-yard plunge — gave Louisville a 31-28 lead with more than nine minutes left in the contest.

After an exchange of punts, FSU started a critical drive inside the Louisville 40-yard-line with about four minutes to play. It took the Seminoles just one play to go ahead for good as Cook outraced defenders down the sideline for a 38-yard touchdown.

As it had for most of the second half, the Florida State defense came up big. The Seminoles were able to force a turnover on downs before Winston ultimately put the Cardinals away. Facing 3rd-and-6 with just over two minutes to play, the reigning Heisman winner found fullback Freddie Stevenson in the flat for the game-sealing 35-yard touchdown.

Winston overcame three early interceptions — two by the nation’s leader, Gerod Holliman — to finish with a season-high 401 yards passing and three touchdowns. Cook rushed for 110 yards on just nine carries as the Seminoles tallied 574 yards of offense against a vaunted Louisville defense.

Dyer rushed for 134 yards while Parker led all receivers with 214 yards receiving in the loss. FSU linebacker Reggie Northrup totaled 12 tackles and a late interception.

The Seminoles would run their winning streak to a school-record 29 games before ultimately falling to Oregon in the Rose Bowl — also the first-ever College Football Playoff. The loss dropped Louisville to 6-3, but the Cardinals would bounce back to win their next three games before falling to Georgia in the Belk Bowl. Louisville finished No. 24 in the final polls, but blowing a 21-0 lead to the reigning national champions would cost the Cardinals a 10-win season. That loss came five years ago today.