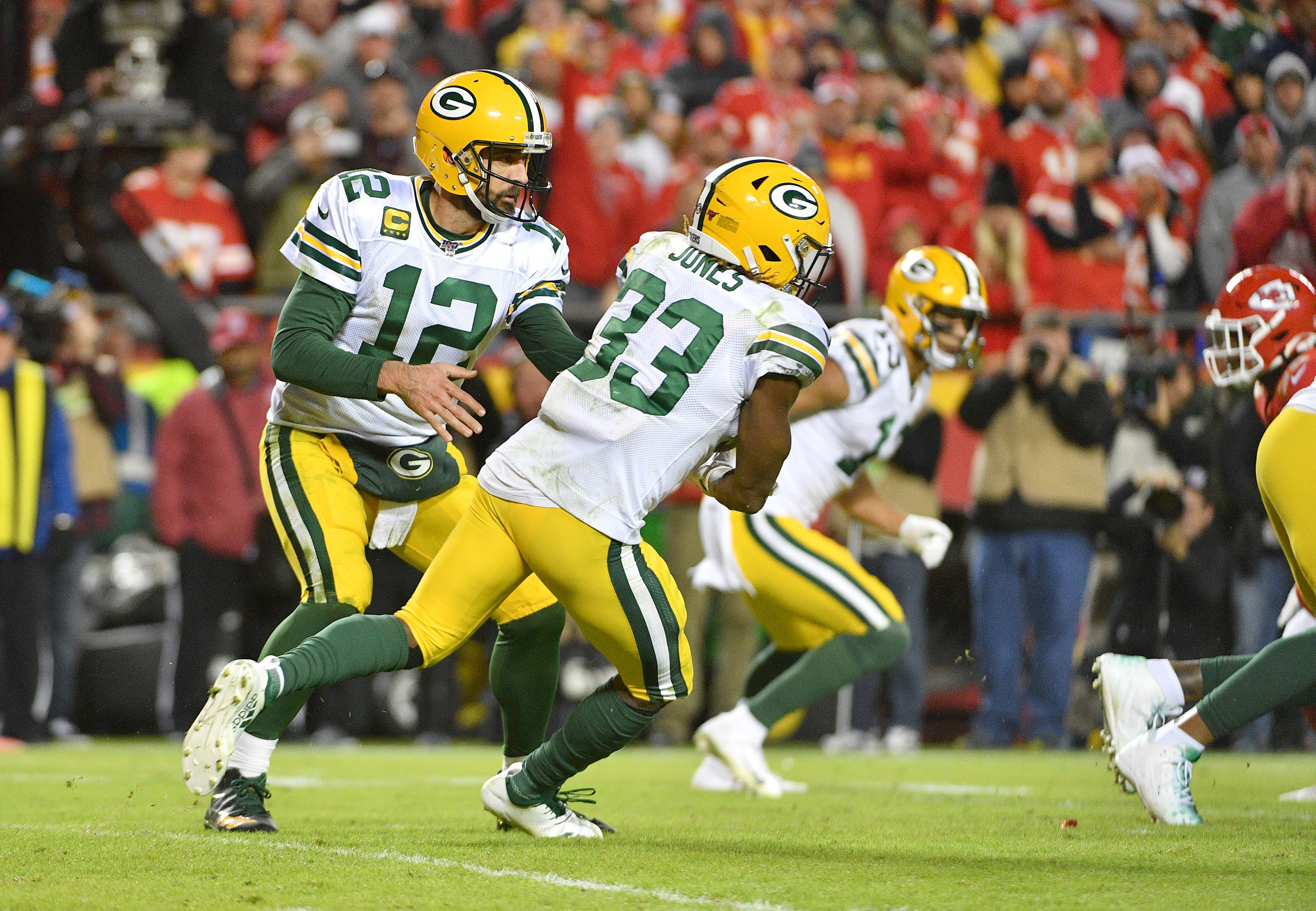 Two of the biggest questions asked about the Green Bay Packers before the season started were how would Aaron Rodgers and rookie head coach Matt LaFleur co-exist and how long would it take until Rodgers was comfortable in the Packers new offense? Well, eight games into the season, these questions have been answered. After a bit of a sluggish start, the Packers offense has played well despite injuries to key personnel like top wideout Davante Adams.

The Packers currently rank 13th in total yards gained per game. They are ranked 18th in rushing yards and seventh in passing yards.

The offense is certainly different than it was a year ago. The Packers are utilizing a variety of targets in the passing game including running backs Aaron Jones and Jamaal Williams. They are also running ball more often and more consistently than they have in the past and have successfully integrated the passing attack and the rushing game.

The offense has been consistent after a slow start to the season and it has yet to reach its full potential.

Grades are a combination of expectations and performance. The grade is for the unit with each player’s performance discussed within the unit’s analysis.

Aaron Rodgers has gelled in the new offense. He is utilizing shorter passes and relying on his receivers to gain yards after the catch.

Rodgers has completed 65.4 percent of his passes for 2,324 yards. He has thrown 16 touchdowns and just two interceptions. A-Rod is averaging 290.5 yards per game and has a quarterback rating of 106.7.

While he does sometimes hold the ball for a long time when he’s trying to extend plays, Rodgers isn’t always going for big gains on every play. He is also still capable of picking up key first downs when he decides to run with the football.

Rodgers is still capable of making breathtaking completions that few other quarterbacks can make and he is clearly the leader in the Green Bay locker room.

Rodgers can be even more effective once he gets Adams back in the lineup. Ironically, not having his top target available may have helped Rodgers learn this offense more quickly and his success speaks volumes about how he and LaFleur are on the same page.

Backup Tim Boyle made a one late game appearance but has yet to throw a pass. He has three kneel downs in the victory formation.

The duo of Aaron Jones and Jamaal Williams has been an effective one for the Packers both on the ground and as receivers out of the backfield. Jones is averaging 4.1-yards per carry and has scored eight touchdowns rushing and three more receiving. Jones is elusive, quick and has truly improved as receiver and blocker. He leads the team with 34 receptions and has turned several receptions into long gains.

Williams isn’t as explosive as Jones, but he’s smart, consistent and a strong blocker and receiver. He picked up more than 100 yards against Detroit and is averaging 4.4-yards per rush. He has added 19 receptions including four touchdown catches to go with his one rushing touchdown.

Fullback Danny Vitale is a serviceable blocker who has become a surprise weapon as a receiver. Vitale has six catches on the season but is averaging almost 12 yards per reception.

Tra Carson played in two games before being let go and was a useful fill-in. Rookie Dexter Williams has been active for two games and has gained two yards on three carries. He will see more action once he gets better at blitz pickups and running pass routes.

The Packers miss Davante Adams and their depth at this position is a bit thin. Adams has missed the last four games due to a turf toe injury. He was on pace for 100 catches and 1,512 yards before he got hurt although he has yet to catch a touchdown pass. Adams has great hands, runs precise routes and has outstanding body control. He is someone Rodgers can always rely on to get open when it matters most.

Rodgers still hasn’t figured out how to best utilize the game-breaking speed of Marquez Valdes-Scantling. MVS is averaging 19.1-yards per catch and seems to make one long catch almost every game, but he disappears for stretches and that can be frustrating. He is still improving his game in his second season.

This has been a disappointing season so far for Geronimo Allison. The fourth-year man out of Illinois has dropped too many passes and has just 18 catches for 184 yards and two scores thus far. Allison’s catches seem to come in spurts but then he struggles to get open for long stretches. Allison has played through some nagging injuries and needs to have a stronger second half.

Allen Lazard stepped up when Adams went down and became Rodgers’ favorite wide receiver over the past three games. Lazard has excellent size and made a dramatic touchdown catch against Detroit. He has 12 catches for 149 yards and the one score with all those catches coming in the last three contests.

Jake Kumerow has missed two games due to injury. He has eight receptions for 140 yards and one score. The Wisconsin-Whitewater alum is a fan favorite, but he will only get limited opportunities once Adams returns to the lineup.

The Packers traded Trevor Davis after two games. Darrius Shepherd made one catch for one yard before being cut on October 29. Shepherd lost his confidence after fumbling a punt return and having a potential touchdown pass deflect off his facemask against the Eagles. Former Raiders receiver Ryan Grant was signed two weeks ago but has yet to be activated for a game.

Jimmy Graham continues to struggle separating from defenders and is no longer an elite tight end. He is still useful as a secondary option. Graham has 21 catches for 234 yards and three touchdowns, one more TD than he had all last season.

Backup Marcedes Lewis adds experience and is the team’s best blocking tight end. He has 10 catches for 130 yards. Six of those receptions have resulted in first downs.

Robert Tonyan shows flashes, but injuries have slowed his progress. He has four catches for 66 yards in five games thus far. Tonyan has great size and speed for a tight end but needs more experience. Evan Baylis contributed on special teams and saw spot duty when Tonyan was hurt. He has been moved from the practice squad to the active roster several times this season and was again released on October 29.

The offensive line has done a very good job overall. After a rough start to the season, the pass protection has been very good despite Rodgers’ habit of holding onto the ball when he tries to extend plays. The holes have been there for the running backs consistently. Against Kansas City, the team executed the four-minute drill to perfection starting at their own two-yard line.

Left tackle David Bakhtiari got off to a disappointing start for him, taking too many penalties and allowing more pressure than expected. He has rebounded well in recent weeks and remains one of the game’s elite pass protectors.

Rookie Elgton Jenkins has played very well since stepping in for the injured Lane Taylor. Jenkins had a strong preseason and was pushing for the starting job before the injury. Jenkins has excellent mobility and should only get better as he gains experience.

Center Corey Linsley is a model of consistency inside. He missed part of one game with a concussion, but Lucas Patrick did an admirable job filling in for him. Linsley doesn’t get a lot of attention, but that’s because he just goes out and does a good job game after game.

Free agent acquisition Billy Turner has struggled at times. Turner is a competent player and a big improvement at the position over last year, but he’s gotten beat a little too often in pass protection.

Bryan Bulaga didn’t give up a sack until Week 8 against the Chiefs. The veteran Iowa alum has played through some nagging injuries but remains a very good player when he’s in the lineup. He’s also a veteran leader in the locker room.

Alex Light struggled in his first appearance this season but filled in well on both sides of the line against the Chiefs. The Packers would be concerned if they had to turn to Light long term. Backups Adam Pankey and Cole Madison have yet to see any significant action this season.