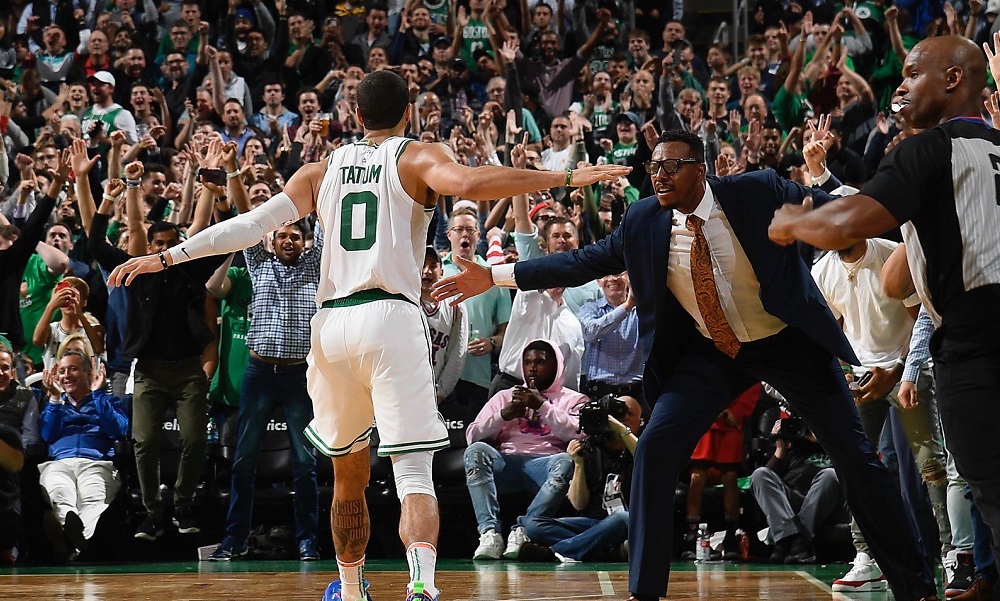 Tonight the Celtics hosted a rematch with the team that crushed them in last year’s playoffs, and for the first 24 minutes it looked like more of the same. But Boston buried the Bucks with a 74-47 second half to win going away, 116-105, and a familiar spirit returned.

I don't know what the Celtics ceiling is, but they would have quit on this game last season.

Kemba Walker led the way with 32 points (13 in a huge fourth quarter), 6 assists and 6 rebounds. Gordon Hayward had 21 points, 7 assists and 10 boards. The player of the game was Marcus Smart, with 19/6/4, including 5 threes and some tremendous defense. Smart inspired the turnaround during the Celtics’ 38-18 blitz in the third quarter. Jayson Tatum added 25 points and capped the comeback by draining consecutive threes to close the third.

For Milwaukee, Khris Middleton led with 26 points. MVP Giannis Antetokounmpo had 22 points and 14 rebounds, but failed to dominate, thanks mostly to Smart’s effort.

Celtics say Jaylen Brown is out tonight due to illness.

The #Celtics begin the game with Marcus Smart matched up with Giannis Antetokounmpo.

The Time Lord denies all who try 🤚🚫 pic.twitter.com/MTxQTbAfFS

Early going was rough. (You expect Brook Lopez to hit 3s, but Robin?)

First 3 of the season for Robin Lopez and Bucks are already 5-of-8 from downtown.

The Celtics are just getting roasted. The Bucks are 12 for 18 from the field with five made 3-pointers over the first 9:58 of this thing.

End of the first: Bucks 34, Celtics 19. Indicator: Milwaukee was 5 of 9 on threes while Boston was 4 of 8 on free throws. Second quarter wasn’t any better.

The Celtics have done some really sloppy, lazy stuff. That would cost them against anyone. Against one of the best teams in the NBA, it's a killer.

Giannis air balled back to back free throwspic.twitter.com/wPyWXOHJ24

Takeaways from the first half of #Celtics #Bucks game.

* No spark plugs for Boston (Every Celtic who has played tonight has a negative plus/minus).

It’s almost Halloween, so here’s the Hayward, Tatum and Kemba shot chart from the first half. pic.twitter.com/39CRFQbOXV

…but Smart refused to give in.

Marcus Smart is the only player giving me hope right now

How the hell is this a 7 point game? Two words. Marcus Smart.

I guess the Celtics m.o. this year is to just suck in the first half and then shoot lights out afterwards Hayward is suddenly up to 6-13 shooting (3-5 3pt) for 15 points

The Truth was in the house, and Tatum knew it.

Paul Pierce is on his feet courtside. Revving up the crowd. Talking stuff to the officials. This is awesome!

And the Celtics stunningly came all the way back to go ahead.

Tatum stuffs Giannis and then knocks down a 3 for the lead! pic.twitter.com/EvG5h0AGPr

Celtics closed the quarter with a 22-5 run.
Paul Pierce was out on the court going bananas after that Tatum 3.

Celtics double up the Bucks in the third quarter 38-18. What a turnaround.

*running through my room popping my Celtics shirt*

THE GRITTY CELTICS ARE BACK BABY!!!!!!

The Cs poured it on in the fourth.

16 points for Hayward in the second half on 7/8 FG. Just a monster turnaround for him.

Kemba up to 29 points. He's putting this thing away in a hurry.

When do we build the Kemba statue

Smart really is a pain in the ass for opponents ha

Smart is way up under Giannis' skin now. The league's preeminent agitator has done his thing tonight.

Boston rallies from 19 down.

Marcus Smart keys it all with Giannis defense.

That was one hell of a win! The Celtics outscored MIL by 27 points during the 2H behind 32 points from Kemba, 25 from Tatum and 21 from Hayward. They were 100% dominant at both ends.

Celtics really got their heart back, Love to see it

This is our house.