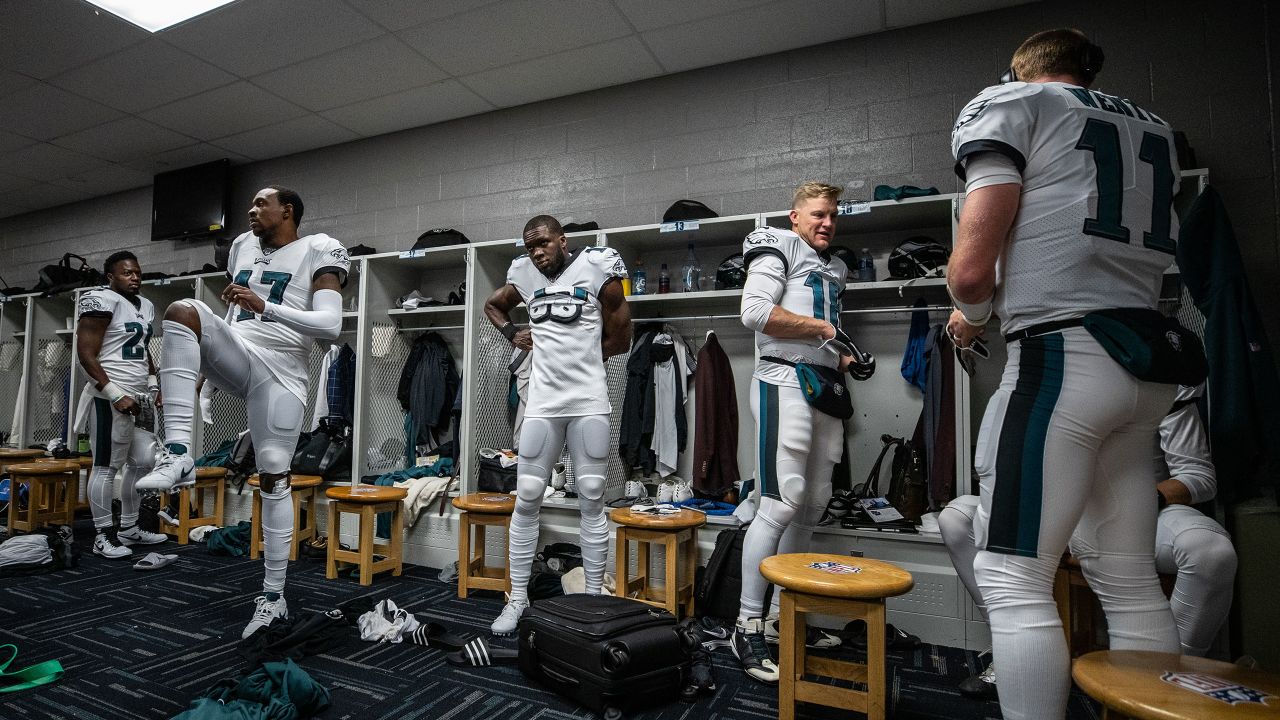 No one ever predicted Mitch Trubisky would be the next Aaron Rodgers…but for all the draft capital the Bears invested into trading up for Trubisky (bypassing a prospect named Mahomes), it’s fair to say Chicago expected better.

My concern is the Eagles will underestimate Mitch and the somewhat dormant Bears offense. I’ve seen Trubisky win games with as few as 12 passes attempted. That’s beyond old school, that’s just weird. But here’s the key to the story: Trubisky is a better football player than he is a quarterback. Let that sink in before you toss your coffee or beer at me.

The guy (kid) makes improv football plays in close games. I don’t know if it’s genetic or spiritual, but if you let him hang around, he’s gonna surprise you and maybe even break your heart.

The point is: I don’t fear Trubisky, but I respect his journey. We can leave it at that.

With that as a backdrop, let’s preview the Bears-Eagles game…

The Chicago Bears (3-4) are riding a three-game losing streak following a Week 8 loss to the Los Angeles Chargers (3-5), which dropped them to last place in a competitive NFC North.

Vegas isn’t feeling the Bears either following Sunday’s demoralizing loss to the Chargers, where Chicago’s offense — play-calling and quarterback, especially — has you wondering if they’ll ever get on track this season.

The Bears have opened as 4.5-point underdogs against the Eagles, according to BetMGM.

Chicago had been favorites in every game they’ve played this season until now.

Which is yet another Halloween omen awakening my inner Trubisky…

Halloween, All Souls Day, and now Trubisky in one compressed weekend?? If you could invent a TRAP game, then this would be the blueprint.

Chicago media are busy trying to bury Trubisky, to wit, “the Bears appear to be a quarterback — and offense — away from being a contender.”

Fools! Don’t they know Mitch is just biding his time, waiting for the moment to turn into a werewolf and take over a game?

But even if my Trubisky nightmare doesn’t happen, the Eagles may be hard-pressed themselves to score more points than they give up.

Lost in the fact that the Bears dropped their third straight game — and finished the month of October 0-3 — is that Chicago still has one of the NFL’s best defenses.

After a rough two outings against the Raiders and Saints, the Bears defense returned in dominant fashion holding the Chargers to just 36 yards on 12 carries. They also held Los Angeles to just 17 points, which should be enough to win most games. Unfortunately for them, they have an offense that can’t seem to surpass the 20-point mark…for now, anyway.

But if the Bears defense can continue to impose its will against the Eagles’ offense — and get some help from their own offense (cue the Trubisky “werewolf” factor) — then we’ve seen what this defense can do for this football team. It’s carried them on their backs before, and it’ll likely do it again.

Should be a defining moment for the Eagles…this is a real hard football game coming up.

Look, the Bears should have won last week, and by the way, Trubisky was moving the chains— in last Sunday’s loss to the Chargers, the Bears compiled season highs with 388 yards and 26 first downs and possessed the ball for 38:00. But they scored just one touchdown on five red-zone possessions and committed two turnovers in the fourth quarter. They still had a chance to win, but Eddy Piñeiro missed a 41-yard field-goal wide left as time expired.

This is why you should read the trends, not just past results. Trubisky is due for one of those Frankenstein monsters of the midway moments…

None of that matters this weekend. It’s potential vs. potential.

One of the potential forces coming at the Eagles is the Bears’ improving line play on offense, which sprung RB David Montgomery for 135 yards rushing last week.

After the game, Montgomery pointed to the five guys in front of him as one key to his breakout. In a manner more consistent than the Bears have seen all year, the offensive line managed to win one-on-one matchups.

In Matt Nagy’s adjustments to his offense–I-formation, extra blockers–the offensive line has started to find an identity.

“You can see it from the first play,” said tackle Charles Leno. “I-formation, simple, but it’s just a way that offensive linemen and running backs can hit their hole, get off the ball and just be physical, and that’s what we were doing — just things like that. Not a lot of RPO stuff, just going straight at defenders because as offensive linemen and running backs, that’s what we like to do. We like to go straight downhill.”

See, this is what Trubisky feeds off when he’s hot…

Leno said that he prefers the philosophy of the “I-formation”, although, in his time with the Bears and in college at Boise State, he has generally played in more pass-centric spread offenses.

“Punish them,” said Leno. “That’s really what it is. We just want to go out there and hit people. It’s fun for offensive linemen when you get to hit somebody instead of in pass pro— those guys are coming 275 pounds, running 4.5s at your face all day. It’s better when we can go attack them.”

That’s what it’s gonna be— trench warfare on defense for the Eagles, and it’s what Trubisky understands and thrives upon.

Due to injuries and illness, the Bears have started four different combinations on the offensive line in the first seven games. For the second straight week, the Bears have used Leno, Cody Whitehair, James Daniels, Rashaad Coward and Bobbie Massie. Guess what? Their revised unit is coming together just as the Bears come into Philly… that is so Trubisky! He thrives on these come-together moments.

Yeah, you should never turn your back on a quarterback who’s also a real football player. As much as his overall stats suck, Trubisky has a unique learning curve going for him.

According to Bears.com, looking to hone his leadership skills, Trubisky watched a TV copy of Sunday’s loss to the Chargers to see exactly how his teammates viewed him.

“I’ve been watching the ‘team film’ copies of the game,” said the Bears quarterback. “But this time I watched the [TV copy] to really see my facial expressions, my body language and what I’m really doing during the game.”

It was a telling and eye-opening experience for Trubisky, who at times saw a stoic and stressed quarterback whom he hardly recognized.

“That told me a lot about myself,” Trubisky said. “It was weird watching it because I really didn’t feel like it was me. It was kind of a shell of myself. I’m going to get back to really leading in a way that I know how.”

Oh crap, remember I warned you— this is going to be one of those “Trubisky or not Trubisky” games of revelation. American Werewolf in Philadelphia…. we better be well-stocked with silver bullets, or cocktail stakes, or whatever the hell you need to kill werewolves…