Your Morning Dump… Where it’s Halloween and, coincidentally, the Celtics look scary again 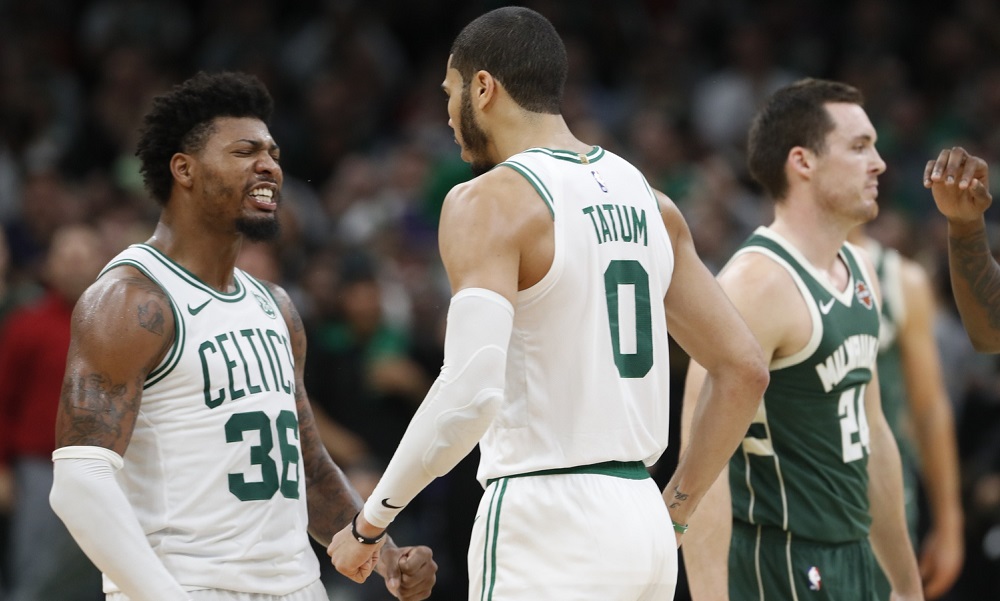 Your Morning Dump… Where it’s Halloween and, coincidentally, the Celtics look scary again

If it’s possible to have a meaningful win in the 4th game of 82…the #celts had one tonight. We’re onto something here. #nba #whatbucks #bleedgreen ☘️

On this October 31, we note that Scary Terry isn’t in Boston anymore. Nevertheless, the Celtics look like they’re ready to terrify opponents on a regular basis this season.

Last season, fans going to the Garden were repeatedly disappointed, like they rang every neighbor’s bell and got nothing but boxes of raisins. After the nightmarish end to the 2019 playoffs, we didn’t know if this season would be a trick or a treat.

But last night’s game was as sweet as a pillowcase loaded with full-size candy bars. The Celtics, as they did so many times in the years before last season, refused to let a large deficit keep them down. They played hard, were persistent, and stuck together. Soon, the game turned their way.

It is only Game 4, a minute sample size, but there is reason to be optimistic this year is different and this team is different.

Jayson Tatum and Gordon Hayward recovered from poor first halves to combine for 15-for-21 shooting and 36 points in the final 24 minutes. Kemba Walker is beginning to cement his role as a closer and canned a pair of 3-pointers along with 11 free throws after halftime.

The resiliency was apparent. The Celtics continued to defend Antetokounmpo with multiple bodies and finally caused frustration toward the end. The Bucks, like the Celtics, are still trying to figure themselves out, but they should be the more established and cohesive team because most of their core has returned.

It’s difficult to send a message so early in the season, but the Celtics did let the Bucks know they won’t be pushovers this time. They played with a spark and enthusiasm not seen much last year.

“It feels great, especially because we were knocked out by these guys,” Hayward said. “Also the fact that they were kind of dealing with us pretty easy in the first half. The vibe was down. For us to get a comeback win was huge for us. I wish we would put two halves together. Still a lot of room to grow, but I’m glad that we fought back.”

Globe: It’s looking like the return of the scrappy Celtics

The Celtics, in their quest to avoid lingering on all that contributed to what ailed them a year ago, will not soon admit as much, but it’s hard to argue: This team might finally have its mojo back. Whatever the trials and tribulations of a year ago sapped from this team might have been restored by a new-look roster eager to play like the chip-on-the-shoulder squads that used to roam the Garden.

To put it simpler: Last season’s team doesn’t win Wednesday’s game. That team would have rolled over, pointed fingers, suggested they’d be better in the future, then repeated the pattern over and over.

NBC Sports Boston: Celtics pull off the kind of comeback vs. Bucks that last season’s team couldn’t have done

Play hard, have fun, and the wins will come. That’s all most Celtics fans want out of this season. So far, it’s been sweet.

By the way, Happy Halloween.

On Page 2: Passing the torch

Paul Pierce was a spectator at the Garden last night, and he wasn’t disappointed.

The Truth slapping hands with Jayson Tatum was like passing the torch, the Celtics’ last great scorer handing it off to the anticipated next Boston legend.

The future Hall of Fame star small forward wasn’t shy expressing his enthusiasm for the Celtics’ comeback — leaping out of his chair to applaud, putting Celtics fans behind him on his Instagram story and even grabbing a basketball at one point between quarters and pretending to shoot a deep 3-pointer near mid-court before surrendering it to a nearby official.

Most notably, after Tatum buried a tough iso 3-pointer to end the third quarter, he ran along the sideline near Pierce, who nearly came out on the court again to get a high-five.

“Every time he comes to the game, he always gives us energy,” Tatum said.” I talked to him before the game and just to see someone like him standing up, yelling, cheering. He told me, ‘Give me a five, give me a five.’ ‘Alright, alright, alright.’ It was a great moment.”

Through the four games to date, Tatum has struggled making shots inside the arc, shooting just 37.3% overall. But there’s encouragement to be found in his three-point shooting, which after four games is at 48.3%.

Last night was true to that. JT made 6 of 15 on two-point shots and 4 of 7 threes (10 of 22 overall). He was just 1 of 2 from the foul line, but it all added up to 25 points in 38 minutes. Celtics fans would take that line every night, no question about it. That sort of production would make Tatum an All-Star, just as Celtics fans expect of him.

That’s right, we have high expectations. With good reason.

Who knows if Jayson Tatum ever puts it all together on offense but his flashes today were superb. Think we all often expect too much from young guys. Common comps for Tatum like Paul George weren't this good at 21. Tatum is already a great defender and has shown a ton on offense. pic.twitter.com/b2FB5OR5Kv

It’s nice to see Tatum be compared to Paul George, but if he’s the new Truth, that’s even better.

After last night’s game, Celtics Twitter was amazed (well, at least I was) by this exchange between two legends:

Unique- “being one of a kind, unlike anything else”

Smart is making his mark this year by singlehandedly reviving Celtic Pride through his on- and off-court leadership, everything from arranging a team night at the movies, to taking charges from the current league MVP, to connecting directly with fans on social media.

Actually, Smart has always chatted with fans on Twitter, but he’s now reached a new level with Dangercart, a salary cap expert and cool dude who’s one of the most well-known and respected fans in Celtics Nation.

It’s early, but this season gets better every day.

The Athletic: With stirring comeback, Celtics recall teams of yesteryear, not last year

Globe: Observations from the Celtics’ big comeback win over the Bucks

Herald: Celtics, long on effort and short on drama, have winning spirit back  |  Marcus Smart loves his irritant role with Celtics

Boston Sports Journal: How Marcus Smart changed the equation for Celtics against Giannis