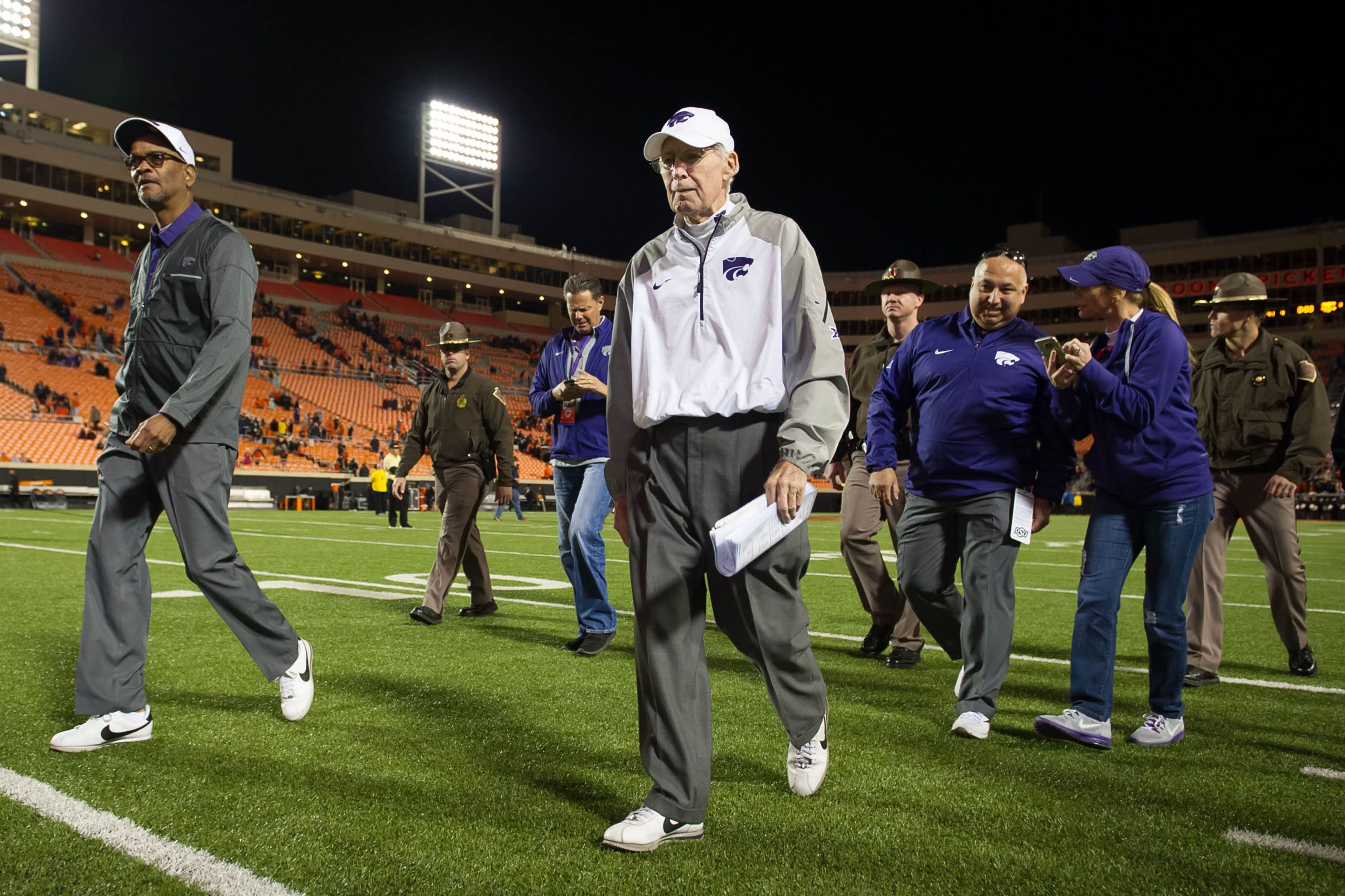 As a 19-point underdog to No. 5 Oklahoma, Kansas State watched its lead grow to as many as 25 before holding off the Sooners, 48-41. Klieman knew it coming in, but in replacing the legend Bill Snyder, he will have big shoes to fill.

Snyder evolved into an absolute legend during his time in Manhattan. In two stints and 27 seasons, Snyder led the Wildcats to 215 wins and 13 AP top 25 finishes. That includes six top-10 finishes.

During his tenure, Snyder had a number of marquee upsets. With the Wildcats coming off a top 5 upset, we look back at the five best upsets of the legendary Snyder’s tenure:

5. Kansas State 45, (10) Oklahoma State 40
Nov. 18, 2017
Kansas State was a 2-touchdown underdog as it made its way to Stillwater to take on a top-10 Oklahoma State team. There were a pair of lead changes in the first quarter and a half before Byron Pringle’s 89-yard kickoff return for a touchdown began a streak of 28 straight Kansas State points. The Cowboys would score three touchdowns in less than a 5-minute span in the fourth quarter, but the Wildcats forced a key turnover on downs with less than two minutes to play to seal the win. In addition to the kickoff return, Pringle finished with 166 yards receiving and three touchdown receptions.

4. Kansas State 38, (18) Nebraska 9
Nov. 15, 2003
Thanks largely to an early-season 3-game losing streak, Kansas State was unranked as it traveled to Lincoln to face Nebraska late in the 2003 season, but the Big 12 North title was still on the line. The contest was tied 7-7 at halftime before Kansas State erupted for 24 straight points to start the second half. Quarterback Ell Roberson accounted for 403 yards of total offense and three total touchdowns with two touchdown passes to James Terry, who finished with 175 yards receiving on six catches. Darren Sproles rushed for 140 yards and a touchdown in the win. The Kansas State defense held Nebraska to 292 yards of offense and forced four turnovers. The Wildcats would go on to claim their first Big 12 title.

3. (4) Nebraska 28, (16) Kansas State 29
Nov. 11, 2000
In a contest that would ultimately decide the Big 12 North division, Kansas State notched its second straight win over Nebraska in Manhattan. The Wildcats scored 16 straight points to take a 23-14 lead into the fourth quarter, but the Cornhuskers would answer with a pair of rushing touchdowns from Dan Alexander in the final period. Quarterback Jonathan Beasley would complete a 62-yard scoring drive with a 12-yard touchdown pass to Quincy Morgan that ultimately served as the game-winner.

2. (15) Kansas State 24, (6) Oklahoma 19
Sept. 23, 2012
Kansas State was a 14-point underdog as it arrived in Norman early in the 2012 season. The Wildcats’ defense would force three Oklahoma turnovers, but still trailed 13-10 entering the final quarter. Collin Klein and John Hubert scored back-to-back touchdowns to put the Wildcats ahead for good. Oklahoma answered with a 10-yard touchdown pass from Landry Jones to Sterling Shepard, but Kansas State managed to run out the game’s final 4:09. Hubert rushed for 130 yards in the victory.

1. (13) Kansas State 35, (1) Oklahoma 7
Dec. 6, 2003 (Big 12 Championship)
The consensus entering the 2003 Big 12 Championship was that every team in the country was playing to finish second to powerhouse and No. 1 Oklahoma. Led by Heisman Trophy winner Jason White, the Sooners had played just one game decided by fewer than 14 points. In three wins over ranked opponents, the Sooners had won by an average of 39 points. Early on at Arrowhead Stadium, it looked like it would be more of the same as running back Kejuan Jones scored a 42-yard touchdown for Oklahoma less than three minutes in. The Sooners would never score again. The Wildcats seized control of the contest with three second-quarter touchdown passes from Ell Roberson. Roberson would add a fourth touchdown pass in the victory on a night where he passed for 227 yards. Running back Darren Sproles would finish with 312 yards of offense from scrimmage including a Big 12 Champion record 235 yards rushing. The Wildcats racked up 519 total yards against Oklahoma en route to their first Big 12 title.