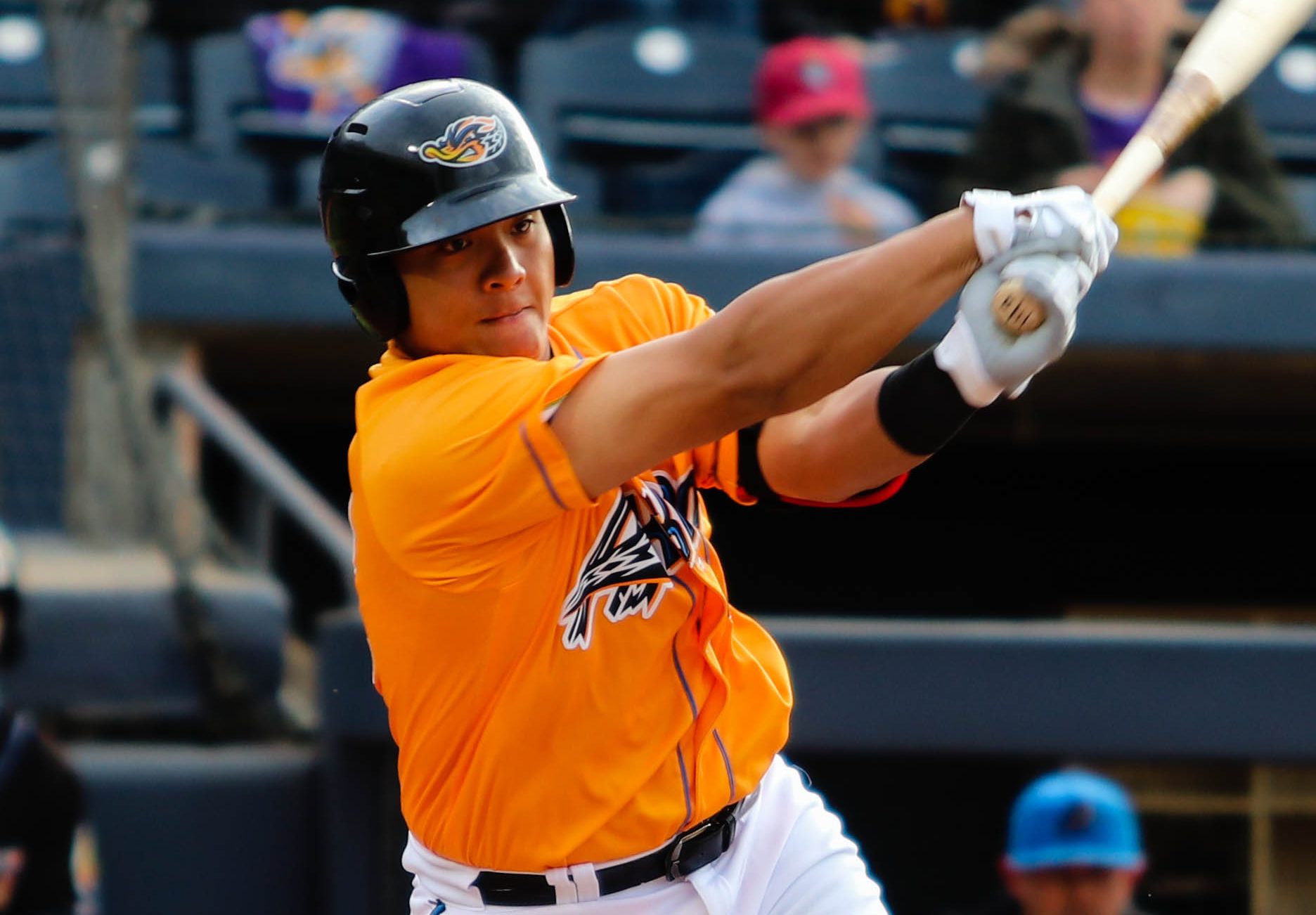 We started off the 2019 Cleveland Indians prospect rankings yesterday with numbers 100 through 76 and will begin a more detailed look at the next group today as we look at numbers 75 through 51. Starting tomorrow, we will look at prospects ten at a time until we get to number one. As always, to be considered a prospect, a player must be under team control by Cleveland through the 2020 season and cannot have a single MLB appearance.

By Joseph Coblitz
Mock wasn’t the best reliever drafted by the Indians in 2019, but he’s certainly an exciting one. With a K/9 of 9.9 in his rookie year between two levels and an ERA of 3.21, there’s a lot to be excited about, but he needs to work on his command.

Schneemann fields a ball at second for the Indians in 2019 extended spring training. – Joseph Coblitz, BurningRiverBaseball

By David Wood
In his first full season with the Indians organization Schneemann batted .287/.366/.374. Despite this, he has been somewhat over looked because the Indians have such a deep pool of middle infielders. It’s too early to decide anything about Schneemann’s long term future, but another strong season at the plate with some added line drive power, would go a long way towards establishing him as a legitimate prospect.

By Stacy Hannan
Chu will soon be bypassed by the more promising catching prospects the Indians have been developing in the lower levels of their farm system. This season Chu hit .229/.290/.357 with 5 HR and 25 in 60 games with AA Akron, and his offensive upside is simply limited.

Garcia makes a start for the Indians during the 2018 AZL season. – Joseph Coblitz, BurningRiverBaseball

By Joseph Coblitz
Garcia had an incredible season in Arizona in 2018 with 41 strike outs and 22 base runners allowed in 26 innings, but he missed the entire 2019 season on the injured list. He still has tremendous potential and will hopefully be healthy enough to play in 2020.

Maestre moves to field a ball during a 2019 AZL Indians Blue play-off game against the Padres 2. – Joseph Coblitz, BurningRiverBaseball

By Joseph Coblitz
Maestre made the rankings last year after a great second season in the Dominican and moves up only slightly this year as he missed most of the 2019 season with injury. From what I did see (2019 extended spring and AZL), I love him on the bases and defensively at second, but he definitely has some work ahead of him at the plate.

By Joseph Coblitz
In general, players who have yet to play official games for the Indians are left off the prospect rankings, but we’re making an exception for Soteldo. He was all set to begin the 2019 season in Arizona after completing extended spring training, but had Tommy John surgery in June and missed the full season. From my observations in extended, he has electric stuff but possibly some control issues with the potential to be like another Carlos Vargas type.

Garcia warms up in the bullpen prior to a start against Padres2 at Peoria Sports Complex. – Joseph Coblitz, BurningRiverBaseball

By Joseph Coblitz
Not to be confused with AZL Indians reliever Luis C. Garcia, Luis D. is a starter who posted a 2.48 ERA as the staff ace of the division winning AZL Indians Blue. One of few young Indians pitchers with poor strike out numbers, Garcia is a ground ball master who is excellent at avoiding hard contact.

By Stacy Hannan
In 63.1 relief innings with Lynchburg this season, Gomez went 2-6 with an impressive 2.27 ERA. His 66 strikeouts versus 17 walks earned him a promotion to AA Akron mid-season, but after allowing three runs on eight hits over three long relief appearances, he was sent back to high A where he ended the season. It will be interesting to see if he can continue to develop at the higher levels of minor league ball.

Rodriguez scores a run for the AZL Indians during the 2018 season. – Joseph Coblitz, BurningRiverBaseball

By David Wood
Rodriguez certainly has talent, but his numbers so far have not been great.  He needs to fully commit this off season and put in the work necessary to see just how good he can be before it’s too late.

By David Wood
Draper is another established college pitcher in the Indians farm system. In Lake County this season he was 9-4 with a 3.12 ERA.  He is somewhat old for A-ball, but he was just drafted in 2017. Draper needs more time with the organization before any conclusions are made about his potential.

Valdes heads back to the dugout during a 2019 AZL Indians Red gam. – Joseph Coblitz, BurningRiverBaseball

By Joseph Coblitz
Being a second round pick comes with a lot of expectations and Valdes appeared to miss all of them in his rookie year. His defense definitely improved as he became more comfortable in the league, but his bat remains a gigantic question mark.

Enright pitches in relief for the AZL Indians against the Padres during the 2019 season. – Joseph Coblitz, BurningRiverBaseball

By Joseph Coblitz
Enright did allow a home run in 2019, but it represented the only earned run of his allowed on the season as he finished the year with a 0.50 ERA. A fair representative of the new school of pitchers, he had a 13 K/9, better than anything he ever did at Virginia Tech.

By Stacy Hannan
This season, Longo failed to separate himself from the other prospects roaming Cleveland’s AA and AAA outfields. He hit .248 in 90 games with Akron, and hit only 5 home runs in 327 at-bats. He did hit 17 doubles and stole 11 bases, but the Indians have yet to see him make the type of jump that other promising outfielders have made over the past few seasons.

By Joseph Coblitz
Escobedo showed great power and speed with an solid 3/2 BB/K rate in Arizona, but completely failed to repeat his numbers in Mahoning Valley. We need to see Escobedo for at least one more year to see if he was just a college bat taking advantange of high school competition or if he truly has the  makings of a multi-tool center fielder.

Ramirez puts a ball in play for the 2019 AZL Indians. – Joseph Coblitz, BurningRiverBaseball

By Joseph Coblitz
Ramirez is a defensive first catcher (43% CS rate in his career) who was hampered in 2019 by a broken hamate bone that cost him most of the year. His near .400 OBP over the last two years is impressive for a catcher and he should stick around in the system for quite awhile.

By Stacy Hannan
Yannuzzi suffered through some growing pains in eight games with the Arizona League Indians Red team this season. Over ten innings, which included two starts and six relief appearances, Yannuzzi pitched to a 9.90 ERA, giving up 12 hits and 16 walks, while striking out ten. Yannuzzi is still young and deserves time to see if his professional pitch repertoire can develop into more than we saw this season, but his failure to limit base runners in the Arizona League gives cause for concern.

Perez makes a rehab appearance with the AZL Indians during the 2019 season. – Joseph Coblitz, BurningRiverBaseball

By David Wood
Perez just completed his fifth season in the organization, but was injured most of the year. When he did pitch, he had very solid numbers going 2-1 record with a 1.59 ERA. In 28.1 innings he gave up just 12 hits and 8 walks.  with 37 strikeouts and a minuscule 0.704 WHIP.  Perez just needs a healthy and successful season to put his career back in gear.

Martinez plays short during 2019 extended spring training prior to heading to the DSL. – Joseph Coblitz, BurningRiverBaseball

By Joseph Coblitz
Basing this ranking more on my personal observations in extended spring than his rookie year in the DSL, Martinez has surprising power, great speed and doesn’t strike out too often. His low ranking now reflects his lack of minor league experience, not his extremely high ceiling.

By Joseph Coblitz
Drafted as a center fielder and pitcher, it looks now like Brennan’s future may be in left where he could be a plus defender. He showed very little power in his brief rookie season, but was remarkable in avoiding strike outs and his 6.9% k-rate was the sixth lowest qualified rate in all of minor league baseball.

By David Wood
Jerez is a power hitting first baseman that just completed his first full season of minor league baseball in Lake County. Jerez batted only .176/.288/.322 and now has had similar numbers every other year except two seasons ago in Arizona. Jerez desperately needs to put together a solid season to show that his one good season was not a fluke.

By David Wood
Reeves is an above average hitting 1B/OF who just completed his best season as a pro. He had a slash line of .277/.376/.404.  In order for Reeves to continue to progress up the minor league ladder some added power in future seasons would be very helpful.

McCarthy starts in a rehab assignment with the 2019 AZL Indians. – Joseph Coblitz, BurningRiverBaseball

By Joseph Coblitz
McCarthy got off to a great start in his rookie season of 2018 with a 0.88 ERA and a minuscule 0.9 BB/9, but had his 2019 campaign derailed with injury. Following a solid start to the season over his first six appearances, he started to struggle over his next three and was ultimately placed on the IL. He looked 100% on his rehab assignment and in his final two appearances in Lake County, so we should expect even more from McCarthy in 2020.

By Joseph Coblitz
Jones is already the 8th rookie level right handed reliever ranked in the top 100 and there are more to come tomorrow. He has better command than those he sits ahead of with a solid 10.8 K/9 and 2.17 ERA in his first pro season.

By Stacy Hannan
Marabell put together a respectable AA season, hitting .273/.321/.390, with eight HR, 23 doubles, and 50 RBI. He was promoted to AAA for the last 20 games of the season, but hit only .203/.261/.297. Granted it was a small sample size, but the competition for outfield spots has intensified over the past season, and Marabell had a hard time keeping up with other prospects’ development.