Your Morning Dump... Where Jayson Tatum is growing up quickly 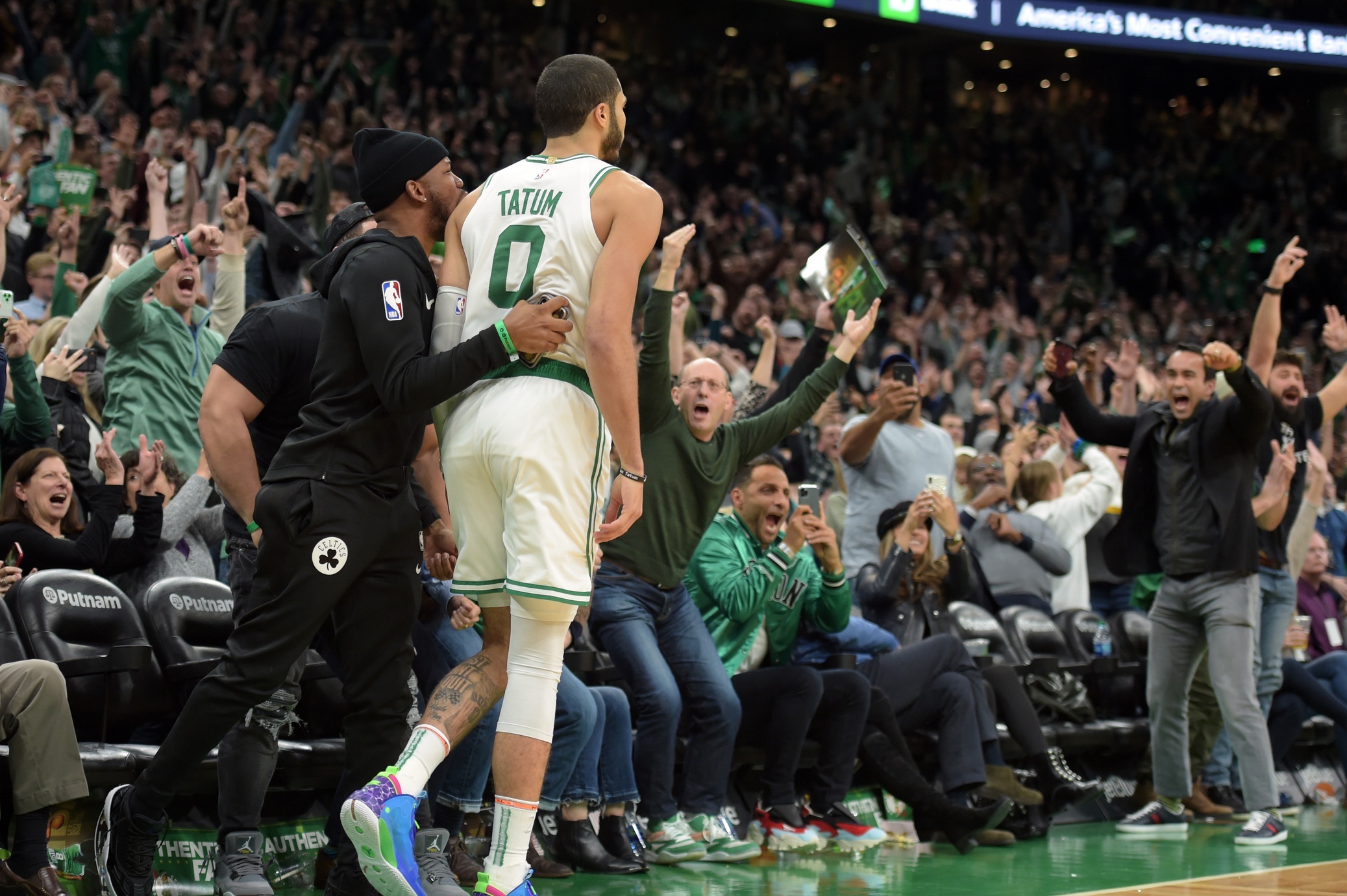 Your Morning Dump... Where Jayson Tatum is growing up quickly

The most notable part of Jayson Tatum’s night came a good 40 minutes after his first career NBA game-winner ripped through the twine.

Sitting at the podium in the Celtics’ makeshift interview room, Tatum was detailing his late-game heroics when he was asked what the shot meant to him in the big picture.

“I don’t want to get too excited,” said Tatum, whose 21-foot stepback with 1.3 seconds remaining lifted Boston to a 104-102 triumph over the visiting Knicks. “The guys I look up to in this league, they do things like this all the time.”

That’s an answer that confirms Tatum is on a path to stardom. It’d be easy for a 21-year-old to revel in a big-time moment, to get lost in his first NBA game-winner. Instead, Tatum was already looking ahead.

We’ve been along for the ride as Jayson Tatum has taken incremental steps towards, and back away from stardom in the NBA. An impressive top-3 rookie campaign in 2017-18, a dunk over Lebron in the ’18 playoffs, a regression in the 2018-19 season, and some steps back in the right direction (even with a lack of efficiency) in the first week of the season.

Count last night as another step, but the steps we’ve seen Tatum take in the last week don’t feel as incremental as the ones that preceded them. First there was Tatum against the Bucks, alongside Kemba Walker, imposing his will on a furious comeback against an eastern conference favorite. Then there was Tatum last night, hitting not only the first game-winner of his career, but making other big shots in the second half and showing off passing skills early in the game that we haven’t really seen him flex before.

The Celtics without Kyrie Irving and with Kemba Walker already seem more egalitarian, even as Walker went for 30 for the third straight night. Maybe it’s less about the Irving for Walker swap than it is the lack of trustworthy scoring off the bench. The Celtics need Walker and Tatum (along with Gordon Hayward and Jaylen Brown) to produce in droves because they’re not going to get 30+ points off the bench much at all in the early part of the season.

With the increased opportunity through five games, Tatum is proving he can handle it. The first few nights weren’t lessons in efficiency, but we know Tatum can be a professional scorer in this league, and the last few nights have proven it. They feel like permanent steps in the right direction — permanent steps towards stardom.

And as for his response post-game — how can you not love that? He’s clearly ready for more of this and it will be great fun to be along for the ride.

On page 2, compare Kemba’s response to Kyrie’s in this situation last year

That shot, of course, is often one Walker is used to taking, but Cardiac Kemba was more than happy to cede the moment to his young teammate.

“That kid is so talented,” Walker said. “I’m happy for him, and I’m happy he made that shot. That was a huge big-time shot, and I’m happy we went to him. Hopefully that keeps him confident, that can really just get something going for us. Unbelievable play. …

“I probably would have took that a lot of times back in Charlotte, but I mean, I don’t mind. I like having other guys being able to take that shot.”

Kyrie Irving scored 25 points for the Celtics, 10 of them from the foul line in the final 4:31. He appeared frustrated afterward with Gordon Hayward, who inbounded the ball on Boston’s final possession.

“Next question,” Irving said when asked about his reaction. “J.T. got a good look so let’s move on.”

First, the obvious: One shot went in, the other didn’t. I don’t think Kemba Walker’s comments change too much if Tatum misses last night, Kyrie Irving’s might if Tatum drains his shot in Orlando 9 months ago, but last night’s shot, on the same play design as the shot last January, and the reaction to it, show if not how far this team has come, how far this team could come if the rest of the season plays out similarly.

And finally, for as rough as last season was, the Mook/JT friendship is real as it gets

“There’s only two people that can guard him in the league and I’m one of them,” Marcus Morris said. “The other one is my brother. So I stand on that. The kid’s nice. I’ve been saying it since he got here.”

Just moments after his mentor and close friend Morris buried a game-tying 3, Tatum hit his first career game-winner. It was a trademark crossover into a step back pull-up jumper over fellow Duke alum R.J. Barrett to beat the Knicks 104-102. Maybe the only reason he came away with the victory was that he managed to get Morris to switch off him.

“He’s been telling me that since the first day I got to the Celtics, that there’s only two people who can guard me: him and his brother,” Tatum said. “I mean, that’s my man, but he’s full of shit.”

Gotta love the back and forth through the post-game media (and I’m assuming there was also plenty of it on the parquet, too) between Jayson Tatum and Marcus Morris. For as stormy as last year was, the bond between these two remained in tact and still is with the players on different teams.

Mook made us want to pull our hair out sometimes with his iso-ball, his periodic defensive lapses, and some of his untimely technical fouls, but he also endeared himself to us, and often seemed like one of the only guys in green above the fray of internal turmoil.

His mentorship to Tatum was always obvious and the way they both played last night, and then spoke afterwards, it’s clear that the friendship will always be there. If Tatum goes on to an illustrious career as a star, you best believe Morris will always chirp about his influence on it all. We’ll roll our eyes at some of it, but then nod knowingly that there’s more than just a kernel of truth to it. You need guys like Marcus Morris on your team. Let’s hope the Celtics, and Tatum don’t miss him too much this year.

NBCSports Boston — Jayson Tatum on game-winner: ‘I wanted Marcus Morris to be guarding me’