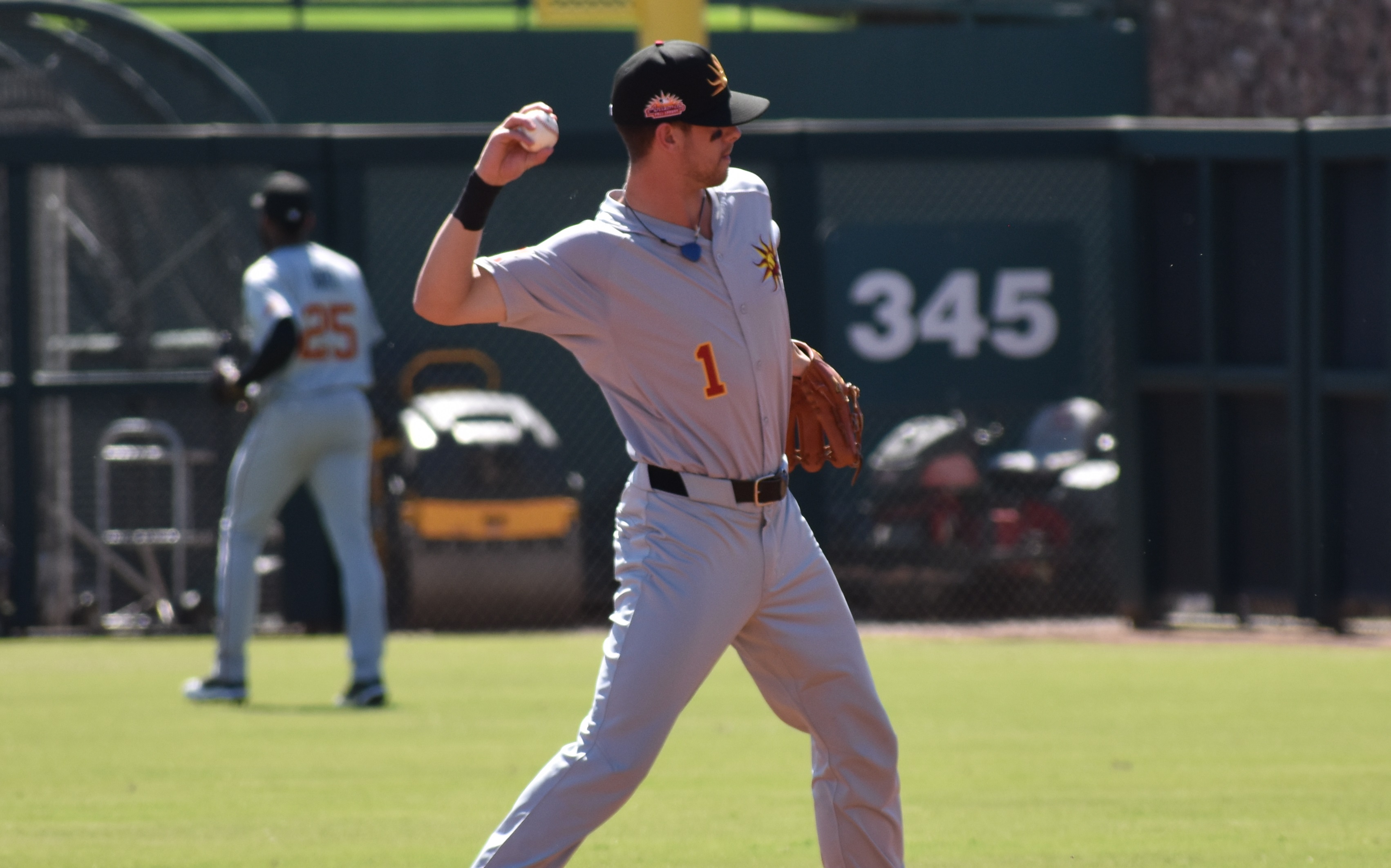 We are continuing on today with our 2019 Indians prospect rankings and will take a more in depth look at the next ten on the list after knocking out 25 on each of the first two days. This particular list focuses on those selected to fall between #41 and #50 with the rest to come ten at a time during the next week.

By Stacy Hannan
During 2018 spring training, Terry Francona had a lot of nice things to say about Clement, which shows Clement’s attitude and work ethic registered with the Tribe manager. After advancing through three levels of the Indians’ system in 2018, Clement spent most of the 2019 season playing for AA Akron. He hit .261/.314/.322 in 98 games and stole 16 bases. Clement does not hit for power (1 HR in 2019), but he only struck out 33 times in 394 AB’s.

He was promoted to AAA Columbus for the last three games of the season, where he went 6-for-11 and played well during the Clippers’ postseason run. Clement’s offensive outlook probably does not translate to an everyday role in the majors, but he could well be in the mix for a utility spot in coming seasons.

By Stacy Hannan
After putting together an impressive season with High-A Lynchburg last year (1-5, 2.45 ERA in 42 games), Siri followed it up with another formidable performance with AA Akron this season. In 45 games for AA Akron, Siri went 2-2 with a 2.98 ERA and 48 strikeouts in 45.1 IP. The Indians will likely rebuild their bullpen again over the off-season, and there are several internal candidates who will get a shot to make the big league team. Siri likely needs time in AAA next season to work on limiting base runners (29 walks and 35 hits in those 45.1 IP), but if he continues to develop he could find his way to Cleveland in the not-too-distant future.

By Stacy Hannan
Robinson, a converted starter, pitched for Lynchburg, Akron, and Columbus this season. With the High-A Hillcats, Robinson went 0-3 with a 3.09 ERA, 35 strikeouts, and seven walks in 23.1 IP. After 14 games Robinson was promoted to Akron, where he went 1-3 with a 1.57 ERA in 16 games. Over 28.2 IP, Robinson struck out 39 and walked 14. He hit a bit of bump in the road in ten games to finish the season with Columbus, where he went 2-1 with a 6.50 ERA with 23 strikeouts and 14 walks in 18 IP. The strikeouts are real for Robinson, but more time in AAA should help him limit his walks and base runners. If he finds more consistency on the mound he could be primed to take that next step.

By Joseph Coblitz
Drafted as a college senior, Coulter was ahead of his rookie league contemporaries in age (by a year and a half) and development, yet he stuck around in Arizona for the full season. He dominated there as he should have with a 2.23 ERA and 11.6 K/9, but that has little meaning due to the diluted talent pool in the AZL. He should skip Mahoning Valley next year to get him a full season in A ball rather than facing more of the same in extended spring training.

By Stacy Hannan
Mathias put together a very solid season for AAA Columbus in 2019, working his way into the conversation for Jason Kipnis‘ replacement at second base next season. He is not the favorite to win this job, but the fact that he’s in the mix is a credit to his fine 2019 season. Mathias started the season off hot, while fellow infielder (and candidate to replace Kipnis) Yu Chang slumped and was injured. Mathias came back down to earth during the season, but finished the year hitting .269/.355/.442 with 12 HR, 59 RBI, and 13 SB. The most impressive thing about Mathias’ year was his obvious progression as a prospect after an injury-marred 2017 and a poor 2018 season with AA (.232, 8 HR). Mathias also had an impressive season defensively. In 52 games at second base, Mathias did not commit an error, and in 47 games at third base, he committed five errors.

By Joseph Coblitz
With 17 strike outs and just three hits allowed in 10 innings, Waldron was one of the best relievers out of a large group of great relievers from the 2019 draft. While his advanced age/development likely aided him in Arizona, he repeated his success over a longer sample in Mahoning Valley where he had a 10.1 K/9 and 1.0 BB/9 over 35.2 innings. At Nebraska, Waldron walked just 45 in just over 300 innings across three seasons and that command has continued in pro ball, despite an extreme increase in strike outs. Look for him to jump to Lake County to start 2020 and potentially multiple levels during the season as he is far beyond rookie level talent.

By Stacy Hannan
In his first full season of minor league baseball, Royalty showed promise as a member of Low-A Lake County’s rotation. In 25 games (24 starts) for the Captains, Royalty went 6-9 with a 4.54 ERA, 100 strikeouts and 49 walks. Royalty pitched 111 innings for the Captains, a year after being drafted out of UNC Wilmington and pitching a total of 22.2 innings between rookie and short season ball. In college, Royalty limited walks, an attribute the Indians’ front office values. If Royalty can limit base runners as a pro, he could find success with the Indians’ system.

By Stacy Hannan
It’s an unfortunate surprise that Hentges ranks so low on this list, as he was considered a very promising Indians’ pitching prospect, and arguably the top lefty prospect in the system prior to the 2019 season. However, Hentges had a lousy season with AA Akron, and took a big step back. In 2018 Hentges found a great deal of success with High-A Lynchburg, going 6-6 with a 3.27 ERA in 23 starts. In that span Hentges struck out 122 and walked 53 in 118.1 IP. He showed enough promise to get a full season in AA this year, but was never able to find his groove.

In 26 starts, Hentges struck out 126 and walked 64, but he also gave up a lot of hits, 148 in 128.2 innings, which led to too many runs and ultimately a 2-13 record and 5.11 ERA. It was bad timing in a season where the injury-marred Indians came looking for help from its farm system arms. Zach Plesac and Aaron Civale, both Akron Rubberducks at the start of the season, got the call to the majors and answered, while Hentges struggled to stay afloat in Akron. Next season will be an important one for Hentges, as eyes will be on whether he bounces back and finds his way forward, or whether he continues to regress.

Diaz is congratulated by Idrogo after hitting a home run for the 2019 AZL Indians Red.

By Joseph Coblitz
Diaz has been nothing less than an offensive force over his first three years in the Indians system, slugging over .500 in both of his seasons in the US. He started 2019 in Arizona, where he hit five home runs and six doubles in 20 games prior to promotion. There, he struggled with strike outs for the first time in his career, although he kept his power.

He has a great arm behind the plate, catching 43% of attempted base stealers, but his other catching skills lay behind many of his contemporaries. Obviously, his offense has greater value as a catcher than anywhere else and he should be able to stay at the position.

Pinto pitches in relief for the Indians during the 2018 AZL season. – Joseph Coblitz, BurningRiverBaseball

By Stacy Hannan
Pinto found success as a member of both Lake County and Lynchburg’s bullpens this season. For the first 17 games of his season, he went 5-1 with a 1.14 ERA and a matching 1.14 WHIP in 31.2 IP. Pinto struck out 38 and walked only seven before getting promoted to Lynchburg. There his success continued as he he went 1-0 with a 1.90 ERA in 25 appearances.

Pinto lowered his WHIP to 0.98 with the Hillcats, as he struck out 44 and walked 13 in 42.2 IP. This was Pinto’s first full season of pro baseball, and he is one to watch as he progresses in the Indians’ system. His ability to limit base runners is exactly what the Indians need as they rebuild their bullpen again, and if Pinto can do that in the upper level of the minors, he could move up on this prospect list by this time next year.