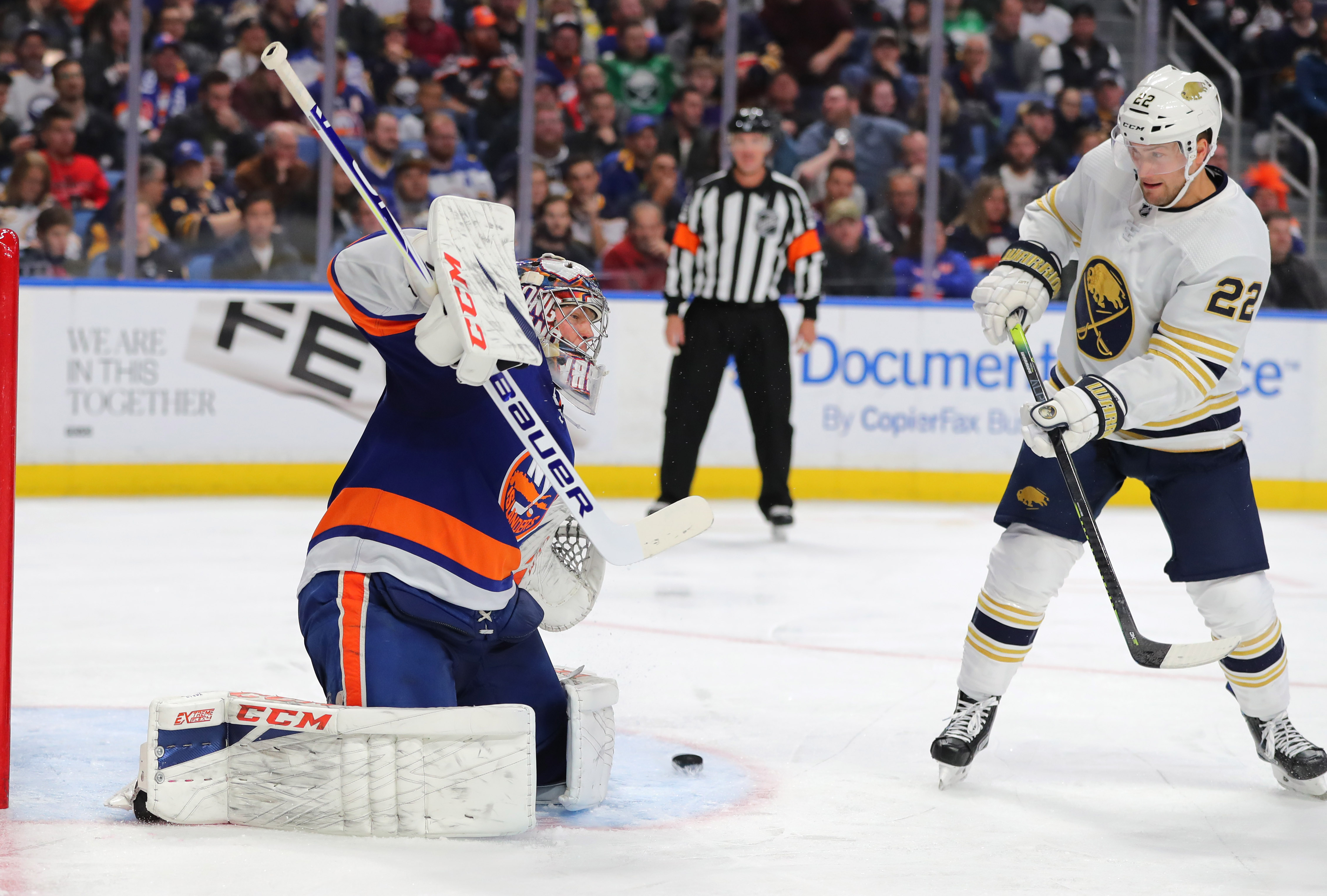 BUFFALO, N.Y. — There seems to be no stopping the Islanders at this point. They picked up their ninth consecutive win on Saturday night by defeating the Buffalo Sabres 1-0.

The Islanders’ lone goal came from Derick Brassard at 8:19 of the first period, which extended his goal streak to five games. Semyon Varlamov stood tall in net for the red hot Islanders making 27 saves.

It’s hard to understate the role Varlamov played in the Islanders win over Buffalo.  The 31-year-old goaltender made the timely stops, was big during the penalty kill and read the puck well all night.

The performance was his first shutout as an Islander and his first since Feb 18, when he made 40 saves in a 3-0 win for the Colorado Avalanche.

“It feels amazing. I’ll tell you one thing, to win is a lot of fun. Let’s keep winning,” Varlamov said. “I think we’ve done a lot of good things today. The team battled all game. It wasn’t an easy one. We scored in the first period and then they were coming. They were coming. They’re a good team, tough team to play against. We did a great, unbelievable job of penalty killing. Blocking the shots and did a lot of good things today.”

Varlamov had started off slow this season, allowing a combined six goals in his first two starts which resulted in losses. Since then, He hasn’t allowed more than three goals in a game — which only occurred once against Philadelphia last Sunday — and has won five straight starts.

He has also quickly found chemistry with the defenders in front of him, which can take time for some players.

“He’s such a good pro,” Islanders coach Barry Trotz said. “He’s so in tune with his body, his game. Always looking for an edge to get better, so it’s not surprising. I think early for us he was trying so hard to impress and fit in like all players do.

“I think he’s settled in and I think he realizes he’s a good fit for this group. … When he’s in the net he’s great.”

Their nine-game streak is tied for the second-longest winning streak in franchise history. The longest streak is 15 games, which was accomplished in 1982.

Saturday’s win was a defensive effort. The Islanders only put up one goal, which is something they haven’t done and won a game all season. In fact, over the course of the nine-game winning streak, the Islanders have not scored fewer than three goals.

But against Buffalo, they did and then allowed their goaltending and defense to hold off the equally as hot Sabres. The Islanders clogged the lanes and prevented many second and third opportunities.

They finished the night with 14 blocked shots.

“Everybody is playing for each other,” Trotz said. “Make it hard on whoever you play. Play the way we need to play against a team that we’re playing, because everyone is a little bit different.  Understand the situation and be fully committed to doing your job well.”

Nick Leddy missed Saturday’s win with a lower-body injury and is considered day-to-day. Trotz said that it was an issue that had been bothering him for a little bit of time.

However, the Islanders bench boss didn’t seem to think it was anything to really worry over. Trotz expected Leddy to be practicing on Monday.

“I don’t expect anything. If this was a playoff game he would have played,” Trotz said.