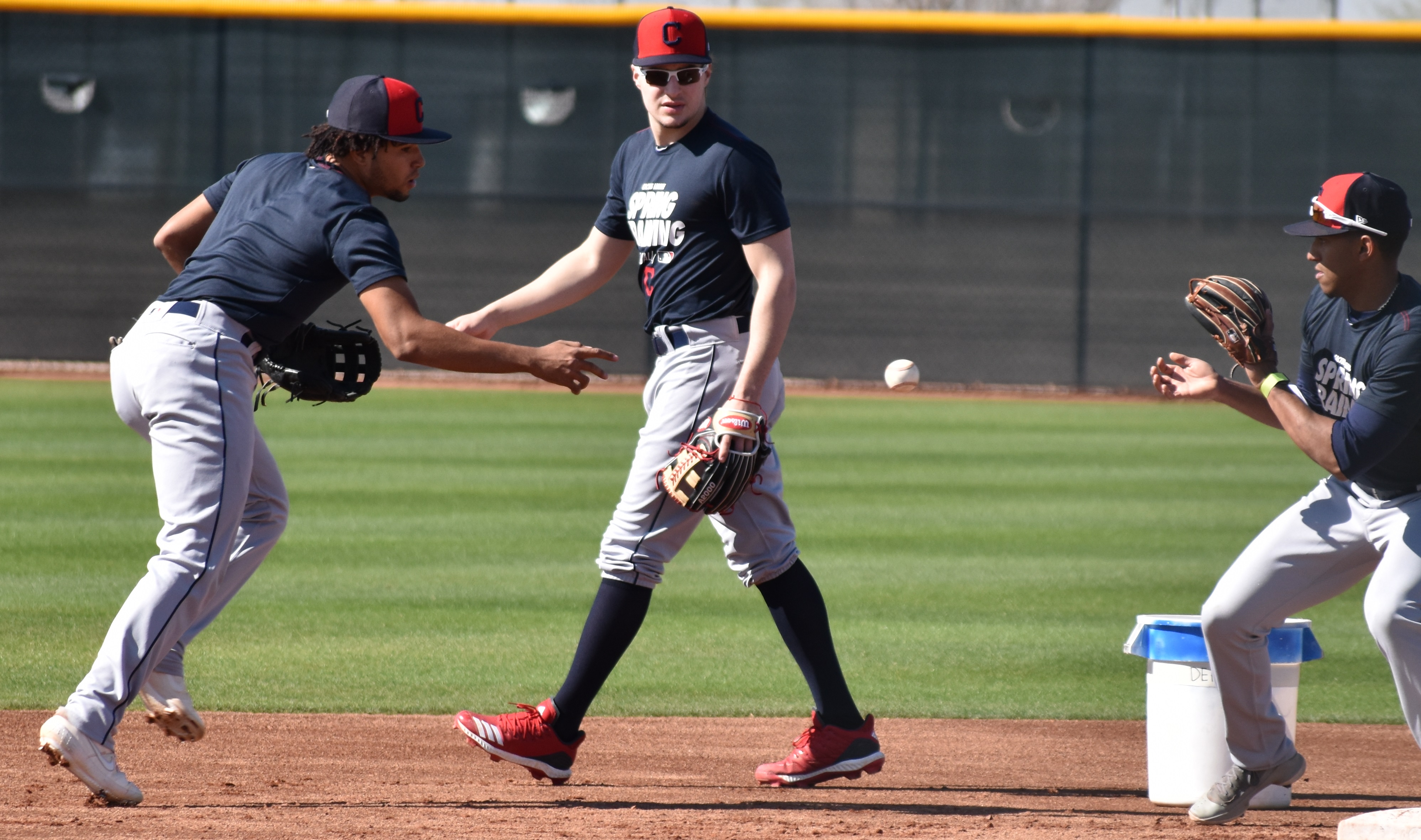 Today is day four of Burning River Baseball’s Cleveland Indians prospect rankings as we look at numbers 31 through 40. To qualify for the list, players must be in the Indians minor league system heading into the 2020 season and have zero games of Major League experience.

By Joseph Coblitz
The Indians 2019 draft was extremely heavy in talented college relievers (nine have already appeared in the top 100), but Labaut may be the biggest steal of them all. A lefty with great velocity and control, he is truly a rare talent and it’s very surprising the Indians were able to grab him in the 35th round, especially since he was drafted initially by the Blue Jays out of high  school in 2015. Possibly the best thing about Labaut is that he doesn’t have a disparity in his left/right splits so he shouldn’t be relegated to a LOOGY role. In 2019, he had a .261 slugging percent against lefties and .228 against righties.

Delgado gets a hit for the Indians during 2019 extended spring training. – Joseph Coblitz, BurningRiverBaseball

By Joseph Coblitz
Delgado has a lot of talent in different areas of the game, but doesn’t particularly stick out in any one. He’s very versatile, playing extensively at second, short and third, but is significantly better defensively at second than the other two. He has a good eye at the plate and patience, but this has often lead to him getting deep into counts and striking out. He has decent speed on the bases, but not great. Ultimately, he’s still extremely young, especially for someone already through a season of A ball, and has all the basics to believe he’ll have a big future.

By Joseph Coblitz
The Indians have had a focus on defense first catchers in recent seasons as players like Roberto Perez have shown how valuable a good framer and blocker can be. Lavastida is that and more as he now has had an OBP above .410 in each of his first two seasons. His 19 doubles in Mahoning Valley helped him get selected for the all-star team and he was called up to Lake County to wrap up the season. He should be considered the Indians best all around catching option throughout the system and is the second highest ranked in this list only because one other catcher has a higher offensive ceiling.

By Joseph Coblitz
This should have been the break out season for the Indians athletic middle infielder, but he tore his labrum after just eleven games with the Captains this season. Because he doesn’t have a full season under his belt yet, he’s almost all potential, but I like what I’ve seen when given the opportunity. He’s a solid defensive short stop, but was tried mostly at third this year and had poor numbers in limited action. In a similar situation, he had poor numbers on the bases, but that doesn’t match with how I saw him play in extended spring 2018. I personally believe he just needs more playing time to get comfortable and reach that potential.

By Joseph Coblitz
Oviedo has had an extremely up and down career so far, starting out with a great season in 2017 in the AZL that was largely overlooked due to terrible defense behind him and an outrageous BABIP. The next year, as things came around a bit, he had the best season of any Indians pitcher in the system with Mahoning Valley.

This year, however, he had a bad season all around and his peripheral stats backed up the poor performance. He has always been a big strike out pitcher with few walks, but those numbers flipped in 2019. His ground ball rate stayed constant at 43%, but his ERA flew up to 5.38 in Lake County. It’s hard to know whether to judge him on his body of work or his most recent and his drop in the rankings from 13 to 36 reflects that.

By Joseph Coblitz
Engelmann has the body type of a power hitter, but has almost the exact opposite profile. He’s played significantly in center, left and first base during his two years with the Indians and is a good defender at all three, although I think he is best in a corner outfield spot. He has surprising speed and has stole 18 bases in 23 attempts in addition to his normal aggressive running style. He has decent plate discipline as well and I would expect him to develop more power as he rises through the system.

By Stacy Hannan
Mejia went into the 2019 season as one of the Indians’ most exciting young pitching prospects. He was added the 40 man roster during the off-season, and invited to big-league training camp. The Indians seemingly have their eye on the 6’5″, 240 lb Dominican as a future starter. He has a 91-95 mph fastball and a curve ball with movement, which led him to a 4-8 record with a 3.13 ERA in 17 games (15 starts) with Lake County in 2018.

This season, Mejia seemed to have taken a step back with High-A Lynchburg prior to spending the second half of the season on the IL with an abdominal injury. When healthy, he went 3-1 with a 4.09 ERA in eight starts. Mejia also started off 2018 on the IL with a sore elbow, so health is going to play a major factor in whether the Indians have something in Mejia moving forward.

By Joseph Coblitz
There’s a lot to love about this lefty starter. He has great velocity for a lefty, hitting low to mid-90’s on his fast ball, and very consistent command with a 2.4 career BB/9, never straying far from that mark in any season. He has a great breaking ball as well that often leads to strike outs (9.7 career K/9) or weak contact (about a 20% infield fly ball rate over the last three years). He was an older draft pick, but has flown through the system and just competed strongly in the Arizona Fall League, something that should help him adjust to Akron next year. McCarty shouldn’t be long for the big leagues, although his ultimate role there could be long relief as he doesn’t quite stand up to the elite starters in the Indians system (he’s #12 among all SP on this list).

By Joseph Coblitz
Much like Marcos Gonzalez, this should have been a breakout year for Planez, but he broke his hamate bone after just six official games and missed the rest of the season. After watching him in extended spring 2019, however, I was able to make some observations. He’s incredibly fast and a great defender in center, although he doesn’t take advantage of his speed on the bases. He has good power, but extremely poor contact skills, something that stood out as a problem in the Dominican Summer League last year, but is even more apparent now.

I generally dislike player comparisons, but everything about Planez screams “Grady Sizemore.” His ceiling is likely below that, however, as Sizemore’s swing and miss issues didn’t start until he hit the big leagues.

By Joseph Coblitz
Rodriguez is an incredibly exciting young player and it’s apparent the Indians are excited about him as he was promoted to Arizona as a 17 year old rookie, a treatment almost never seen in this franchise. Plate discipline is a major issue, but one that could be corrected with age. Where he really stands out is defensively where he was one of the best defensive third basemen I’ve ever seen in the AZL. He has played short more than third, but his strong arm and great reaction time plays very well at third.