Ten Things We Learned from Packers' 26-11 Loss to Chargers 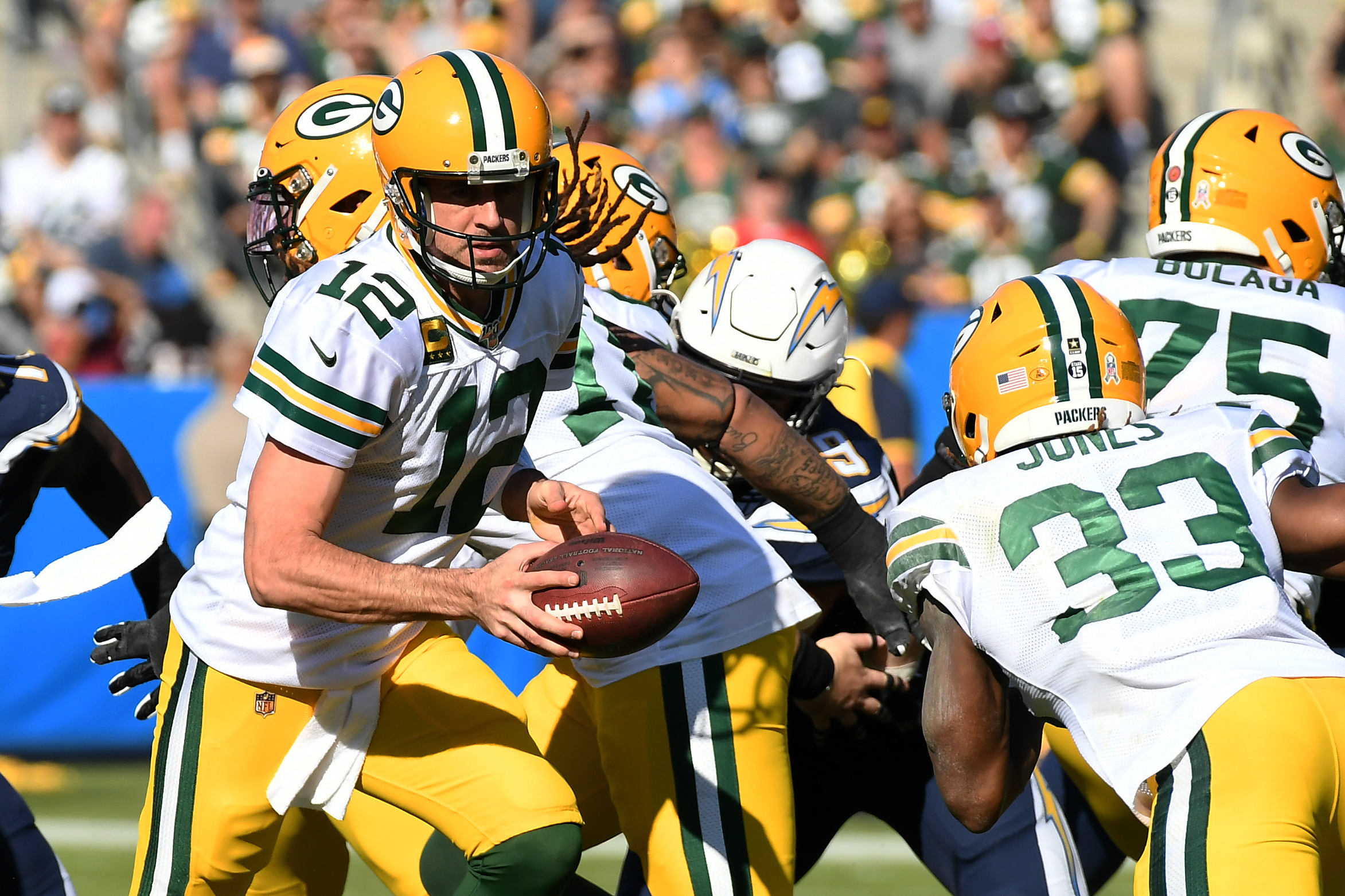 Ten Things We Learned from Packers' 26-11 Loss to Chargers

The Green Bay Packers lost to the Los Angeles Chargers 26-11 to drop their record to 7-2 on the season. The Packers were outgained 442-184 and looked out of sync on both sides of the ball for most of the game. Melvin Gordon ran for two touchdowns for the Chargers while Michael Badgley kicked four field goals. Green Bay’s only score came in the fourth quarter with the Packers already trailing 26-3.

This was just the second time the Packers lost to the Chargers in 12 meetings between the two teams and their first loss since 1984. Green Bay also lost an opportunity to increase their lead in the NFC North as the Vikings, Lions and Bears all lost on Sunday. The Pack remains one game ahead of the Vikings in the standings.

Here are 10 things we learned from the Packers 26-11 loss to the Chargers:

The Packers offensive line was outplayed badly against the Chargers. Officially, the Packers allowed just three sacks of Aaron Rodgers, but Los Angeles put pressure on the Packers quarterback throughout the game.

Green Bay had no answer for the duo of Joey Bosa and Melvin Ingram who each had 1.5 sacks. Bryan Bulaga and Billy Turner looked completely overmatched especially in the first half and both struggled throughout the game.

The Packers offense was never able to get into any kind of rhythm, mostly because of the struggles of the offensive line.

How bad was the passing offense? Rodgers averaged only 4.6-yards per attempt despite completing 65.7 percent of his passes.

Tight ends have given the Green Bay defense problems all season and today was no exception. Hunter Henry made seven catches for 84 yards. The Chargers knew they could get Henry open in the middle of the Green Bay defense and went to their big tight end whenever they needed a key first down.

Henry’s long catch for the game was only 19 yards, but he was so consistently open, and the Chargers kept many drives alive by getting the ball to him.

The Packers defense must make adjustments to slow down opposing tight ends or good teams with franchise quarterbacks will torch them.

The Packers run defense had a few opportunities in the second half to get Rodgers the ball back and keep the team in the game, but they couldn’t stop the duo of Gordon and Austin Ekeler. Gordon ran for 80 yards on 20 carries while Ekeler had 70 yards in just 12 attempts. The clock kept moving and the offense couldn’t get back on the field.

The Chargers rushed for 11 first downs in this game and gained 159 yards on the ground on 38 carries for a 4.2-yard average. This includes Philip Rivers’ kneel downs at the end of the game. Without them, Los Angeles averaged 4.5 yards per rush.

The Packers need to do a better job of stopping the run when they fall behind in games in order to ensure that they get the football back and have a chance to stay in the game.

The Green Bay defense has prided themselves on a bend but don’t break philosophy. That worked against the Chargers but only to a point.

The Chargers dominated the first half but led only 9-0 at the break. The Packers held the Chargers to jus a field goal on their first scoring drive of the second half before the defense tired and finally allowed a touchdown late in the third quarter.

Bend don’t break helps win football games, but not when your offense scores only 11 points. Had the Packers offense had even an average performance, the defense’s bend but don’t break philosophy would have given Green Bay a chance to win. But when the offense is overwhelmed and inefficient, bend don’t break only prolongs the agony.

5. The Packers Got Davante Adams Back But…

Green Bay got star receiver Davante Adams back, but all was not well with the offense. Adams finished the game with seven catches in 11 targets but gained just 41 yards and his long reception was just nine yards. Adams showed a little rust and dropped at least one very catchable pass.

The problem was that Rodgers seemed to lock on to Adams too often in this game. Allen Lazard led the other WRs with just three catches and all of them came in the second half. Geronimo Allison made a pair of catches but had only two targets and took a very hard shot on one of them and had to come out of the game for a while before returning.

Both Jake Kumerow and Marquez Valdes-Scantling failed to make a reception, and both had just two targets in the game.

It is obvious that Rodgers feels most comfortable throwing the ball to Adams, but he needs to distribute the ball to his other receivers more often to keep defenses honest. Of course, that means other receivers need to get open as well and that has also been an issue for the Packers.

6. The Packers Running Game Never Got on Track

The Chargers run defense had been suspect for most of the season, but Green Bay was unable to take advantage. The Pack rushed only 11 times all game for 45 yards and that included one five-yard scramble by Rodgers.  Aaron Jones was held to just 30 yards in eight carries and had a long of seven yards for the game.

Yes, the Packers fell behind early, but trailing only 9-0 at the half meant they could still run the football and keep defenses off balance. However, the Pack all but abandoned the run for most of the game.

7. JK Scott Had His Second Bad Game in a Row

The Packers punting game was a strength for the first seven games but against the Chargers, JK Scott struggled. He had one punt blocked (technically it was an eight-yard punt because it went forward) and averaged only 37.6-yards per kick on five tries.

Scott did place a pair of punts inside the opponent’s 20, but the one block really hurt the Packers and gave the Chargers the ball at the Green Bay 27. Six plays later, the Chargers scored their first touchdown of the game which gave them a commanding 19-0 lead.

8. Tremon Smith Provided the Packers with Some Spark on Returns

The Packers return game has been a problem in recent weeks. Green Bay re-activated Tremon Smith from the practice squad this week and put him in the lineup to run back kicks and punts after releasing Darrius Shepherd.

Penalties did limit the return game again at times but at least Smith showed he can create something for the Packers in the return game if given the chance and was an improvement over what Shephard had given them in recent weeks.

9. The Pass Rush Was Inconsistent

The Packers pass rush sacked Rivers only twice in the game. More importantly, they did not get consistent pressure on the immobile Chargers quarterback.

Preston Smith had one sack while Za’Darius Smith and Tyler Lancaster shared the other, but for most of the game, Rivers had time to look downfield and find an open receiver.

Rivers remains a dangerous quarterback when he has time to throw and he finished the game with a quarterback rating of 108.3 despite not throwing any touchdown passes. He completed 75 percent of his throws and averaged 10.5 yards per attempt, more than double what Rodgers managed for Green Bay.

10. The Coaching Staff Was Unable to Adjust

The Packers have usually come out strong on offense and move the ball well using their scripted plays. That didn’t happen against Los Angeles. Green Bay’s first drive was a three-and-out which included a pass to Aaron Jones for minus-one yards, a false start penalty by Bulaga and a sack of Rodgers on third and eight.

The second drive picked up only one first down before the Packers had to punt the ball away.

The Packers offense didn’t ever find a rhythm until the team trailed 19-0 and even that drive resulted in a 54-yard field goal by Mason Crosby.

The Packers needed to make more adjustments to get the offense on track but never really did while the game was still in reach.

Matt LaFleur and his coaching staff have been successful almost all season at making adjustments, but today, he was outcoached, and the team was outexecuted and the result was a one-sided loss.