The State of the Phillies Rotation As The Offseason Kicks Off 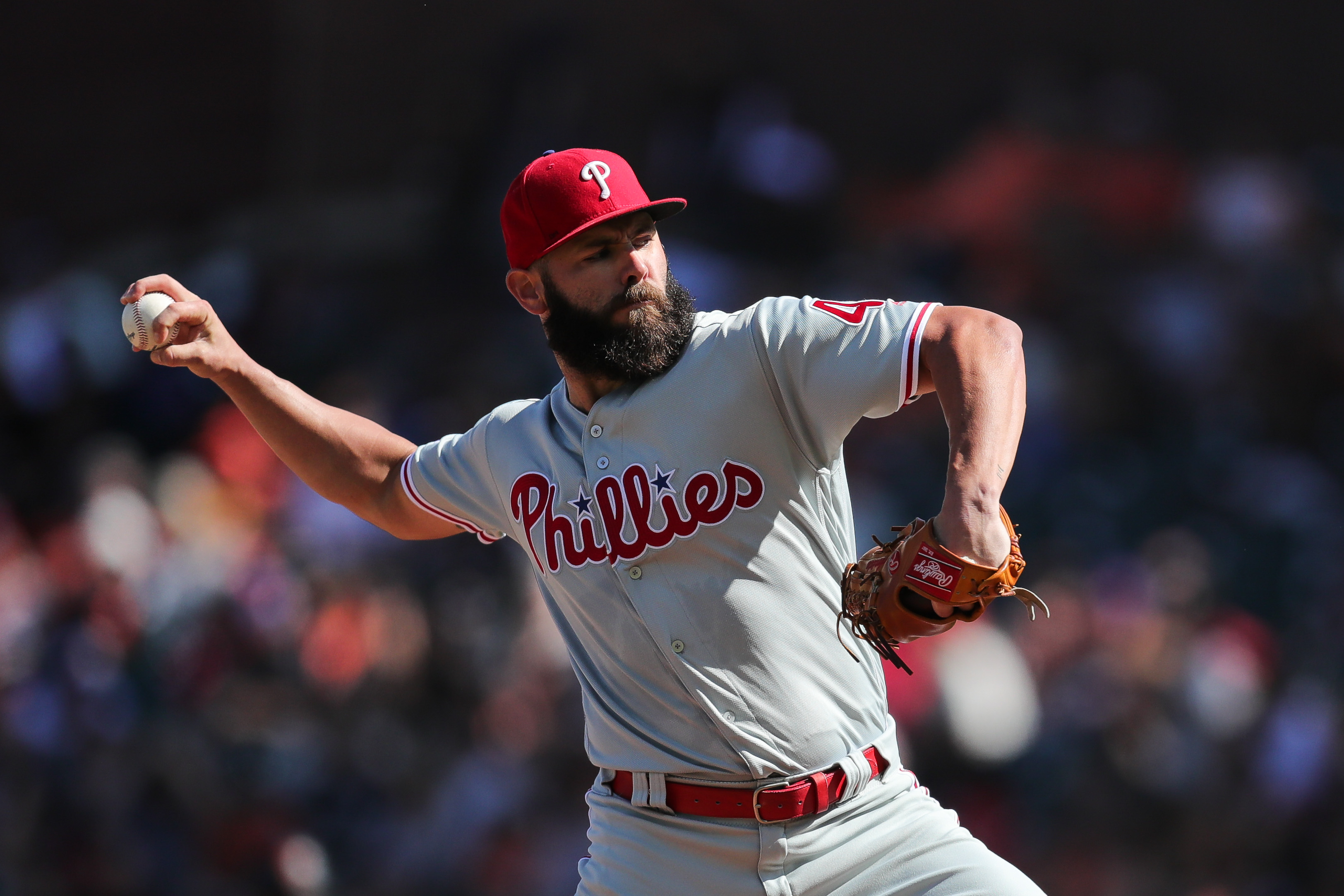 The State of the Phillies Rotation As The Offseason Kicks Off

The great stretch from 2007 to 2011 is treated as recent memory by many Phillies fans. That is fair, as it is close in proximity on a timeline of the entire Philadelphia Phillies franchise, yet ultimately the 2019 team gives no remnants of the 2008 World Series-winning team. They have gone through a long rebuild, and the past two offseasons have been spent completely reshaping the team. The 2017 offseason was spent getting back into the headlines, as the team went big with signings of Tommy Hunter, Pat Neshek, Carlos Santana, and Jake Arrieta. Even that did not compare to the massive winter following the 2018 season. They spent more than any other team (on players such as David Robertson, Andrew McCutchen, and, of course, Bryce Harper) and even made some splashy trades for Jean Segura and JT Realmuto.

The 2019 season did not end the way many had hoped given the efforts of the front office to better the team. That does not mean yet another era is over in Phillies baseball, however. Instead, it appears as if the original plans are just being offset by one year. Once again, the Phillies plan to be one of the most active teams in the offseason. Will they spend record money again? Probably not. Will they trade top prospects for All-Star players? Probably not. Resources are not as plentiful as they were in the previous two years, because of the previous two years. Currently, Roster Resource projects the organization’s 2020 payroll to be $166 million. While some of that will be shaved off as players are non-tendered, it still means the team will not be willing to spend the amount of dough to go over the luxury tax to sign several stars.

Given their overabundance of holes that they would be better off filling in, even if they shy away from the big names such as Gerrit Cole and Anthony Rendon, the team should be active in free agency. Chances are, the Phillies are up near the luxury tax as Opening Day 2020 appears on the calendar, but given the unlikelihood of John Middleton allowing them to go over, they may need to look for some solid value plays.

One place in which Matt Klentak will be especially active should be the starting pitcher market. Obviously, as a group this past year, they were not successful. Individually, there are not too many trustworthy names for the upcoming season. Nobody is questioning Aaron Nola’s standing as the current best pitcher on the team. Outside of the Louisiana-native, there do not seem to be any obvious candidates for a hypothetical 2020 postseason start.

Jake Arrieta will likely have a place in the next version of the Phillies rotation, even if it is just based on him being under contract and unable to be placed in the minor leagues. Maybe if development and free agency go right, however, they would be happier placing him in a reliever role. It is arguably unfair to judge Arrieta’s 2019 too harshly. He was dealing with serious bone spurs in his elbow nearly all season. These conditions led to him having to cut down on his repertoire as he became unable to throw some of his best pitches. Even considering that, Arrieta will be a 34-year-old pitcher coming off major elbow surgery. The seasons preceding 2019 have not exactly been promising either. His xFIP of 4.08 was exactly league average, and his SIERA was 4.29, and DRA 4.08. Considering his age, reliance on groundballs, and consistent drop in whiff rates, it seems as if Arrieta’s age is definitely starting to catch up to him. Depth Charts and Steamer both project his ERA to be 4.79. Arrieta looks more like a number 5 starter as of today.

Zach Eflin finished the 2019 season as a key member of the rotation, but his standing in next season’s rotation is not more favorable than Arrieta. While his ERA in the first third of the season was great, as was his ERA in the final third. However, while those hot streaks show some potential, there was clearly some luck involved. As a command-oriented pitcher, he will always be streaky. In total, his xFIP was 4.76, DRA was 5.13, and SIERA was 4.86. Only his slider has had a positive pitch value over his career, his strikeout rate is under 20%, and his SwStr% is 9%. Even during his better stretches of games, his ability to miss bats and prevent barrels. In fact, similar to many other Phillies pitchers, Eflin saw an increase in sinker usage late in the season. Even with a new pitching coach, it seems like the organization has placed a premium on sinkers as of late. While there is likely good reasoning behind this, as a result, Eflin’s SwStr% has been declining. His projected ERA is over 5.00, so even though his chances of being in the starting rotation are greater than others, it is very possible that he is not in it by the end of 2020.

Vince Velasquez and Nick Pivetta round out the current top 5. While neither has lived up to their upside, they are both still young and have the stuff to break out with a new manager and pitching coach. Velasquez has averaged more than a strikeout per inning in each of the past two seasons and his walk rate is not insanely high. While home runs have become an issue with him, if the MLB un-juices the ball (which I suspect they could), it could help flyball pitchers even more. His stuff is most comparable to other pitchers who have seen breakout seasons, such as Lance Lynn, Kyle Gibson, and Jack Flaherty. He has three pitches with high whiff rates and high put away rates as well. His issues leave him with a projected ERA of 4.84, but the high potential should throw him into the mix at the end of the rotation.

Pivetta is similar in that he is young, has not had much of a consistent shot, and has swing and miss stuff. His xFIP over his short career is still under 4.00, his fastball and curveball spin rates are both over the 65th percentile, and his stuff is most comparable to All-Stars like Trevor Bauer and Justin Verlander according to Baseball Savant. While location matters, his career Edge% is greater than the league average and his 2019 Meatball pitch rate was lower than the league average. He may need some more refinement in mixing up his pitches or maybe even solving a rumored pitch tipping issue, but his name should still be in the hat for now.

Ultimately, the Phillies have one surefire above replacement level starter for 2020 as of now. The second tier of starters fills out the top 5. While all are close enough that what will ultimately separate them is whatever improvements they can show in Spring Training will decide who gets the final spots if others are improved upon. If the Phillies plan to finish in the playoff race (Hint: They do), the team will obviously need to look for several replacements on 4 rotation spots currently held by pitchers projected to have below league average run prevention rates.

Matt Klentak and the rest of the front office will make moves to improve the rotation, no doubt. The question will be how many starters they need, and which ones they decide on. By my own analysis, there are 15 starters currently on the market (assuming nobody accepts a qualifying offer) that are clear upgrades over whoever you may consider their 2nd best starter. So that means there are plenty to choose from and negotiate with, but not enough to sign 4. If they go for one of the more expensive names, such as Gerrit Cole, Stephen Strasburg, or even Zack Wheeler, I would expect them to go for 2 starters in total. If they pass on those top 3, they may even pick up 3 names (even that will be tough considering the bullpen improvements needed).

The more they acquire, the better for their depth. Arrieta and Pivetta could flourish in reliever roles, and given that their current next-men-up in the event of an injury are Cole Irvin, Enyel De Los Santos, and a further-away Spencer Howard, pushing some of the current arms into depth roles should help their hopes for 2020.

Who picks the ball up off the mound for Philadelphia on the 2nd day of the season is a complete mystery to everyone as of now. It could be Madison Bumgarner, Hyun-jin Ryu, Jake Arrieta, Kyle Gibson, etc. But what is known, is that there will be some more spending, and there will be some changes. What the Phillies need to focus on is picking up the right names and improving upon whoever is left in the rotation.