Your Morning Dump... Where this is the Celtics' best start under Stevens 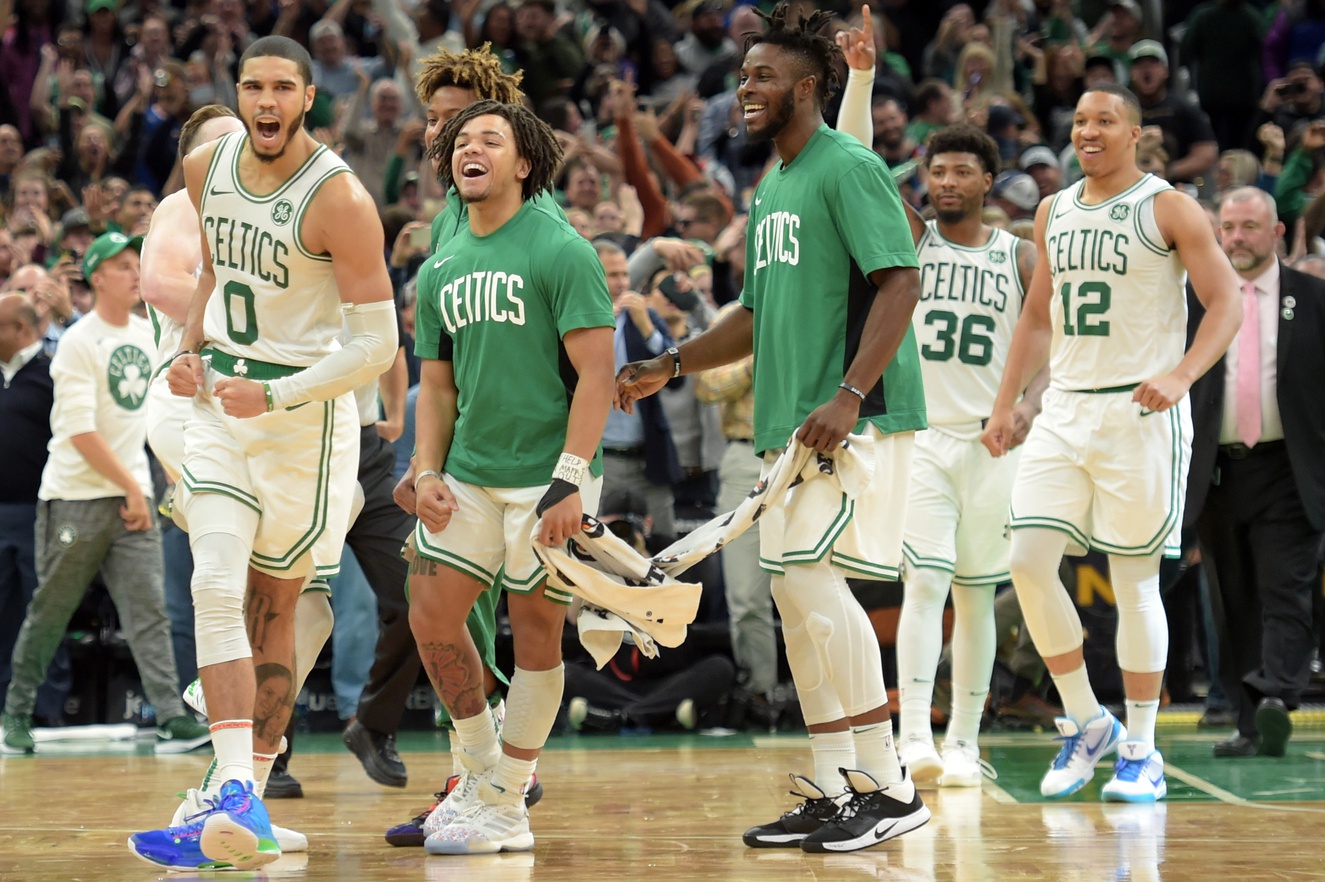 Your Morning Dump... Where this is the Celtics' best start under Stevens

With Walker, the Celtics know exactly what they are getting everyday from a player who is generally upbeat and whose emotional pendulum rarely sways too far.

And that steady-as-you-go demeanor aligns well with Stevens whose consistent demeanor is very much like that of Walker, which is why their ability to connect from day one has been a big part of Boston’s early success.

Sherrod Blakely over at NBC Sports has a list of reasons why the Celtics are off to their best start under Brad Stevens. Topping the list is Kemba Walker. Kyrie Irving has, from this distant perspective, all the hallmarks of someone with an undiagnosed and/or untreated mental health issue. Fortunately for him, he doesn’t seem to be self-medicating with drugs/alcohol. Unfortunately, as long as it’s untreated, he’s going to be this way.

At the same time, Blakely hits on a key point with Kemba, one that was also true with IT: Both of these guys have personalities that mesh well with Stevens’ approach to the game. Bad stuff doesn’t stick to Kemba or IT (see “Finally” item below). Rarely do either of these guys allow the funk of a bad quarter to leak over into the next one, and that sets an important example for new guys like Carsen Edwards and Grant Williams that are probably a bit in their own heads on offense at the moment.

The Celtics have talked about the importance of defense for years, but it was due to take a hit this year after losing Al Horford (Philadelphia) and Aron Baynes (Phoenix) — not to mention assistant coach Micah Shrewsberry, who returned to the college ranks (Purdue) after being the architect behind the team’s top-shelf defense for years.

The defense has been solid, with a defensive rating that ranks among the top 10 in both first and second-half play and overall, and is ranked ninth (101.4) in the NBA.

I’m one who did not expect the C’s defense to fall off appreciably with the departure of Al Horford. The C’s defense in 2015/16, the season before they signed Horford, was ranked 4th, and that was with Isaiah Thomas as starting point guard and a nebulous platoon of guys playing in the post (Olynyk, Amir Johnson, Jared Sullinger, Jonas Jerebko and Tyler Zeller).

So, I’m not surprised that the defense is currently registering a top 10 rate after a loaded opening slate of games.

When last season ended, Brad Stevens was one of the first to be accountable for his role in the team’s underwhelming season.

“I’ll be the first to say that, as far as any other year that I’ve been a head coach, it’s certainly been the most trying,” Stevens told reporters following Boston’s Game 5 loss to Milwaukee in the second round of the playoffs last season. “I think I did a bad job. At the end of the day, as a coach, if your team doesn’t find its best fit together that’s on you. So I’ll do a lot of deep dives into how I can be better.”

And we’re seeing the fruits of that labor of discovery, here at the start of the season. While many Celtics fans and media pundits have been quick to pin the team’s struggles last season on now-ex Celtic Kyrie Irving, Stevens has been steadfast in holding the responsibility for what happened last season on the entire team. And along that same line of thinking, getting back on track is going to have to involve every Celtic.

One of the reasons why I was so high on the Celtics coming into this season is that, from the top down, the team took individual responsibility for what went wrong last season.

The easiest thing to do now that Rozier and Irving are out the door would be pinning blame on them, downplaying the role that their own faults and immaturity played in last season’s debacle. Instead, it appears that everybody has taken something to heart from last season and they’re determined to avoid making the same mistakes twice.

Over at Boston.com, Chad Finn also has a super early review of the C’s season, and a few different points:

I had no idea [Kemba] was such a willing and feisty defender – he’s been taking charges like he’s in a high-stakes competition with Marcus Smart – rather than someone you have to hide on defense like Isaiah Thomas or a disengaged Kyrie Irving. He’s also willing to mix it up on the boards (5.2 per game).

Kemba, in Boston, is playing like a taller IT (albeit not much taller–he’s among the NBA players who are shorter than just-above-average-height-yours-truly), but I must quibble with Finn’s contention that the team had to hide IT on defense.

True, if IT and Smart were both on the court, IT was going to be defending the less dangerous of the other team’s two guards.

However, one of the reasons why the C’s defense was so good with IT was because they didn’t try to hide him on defense. They knew that he couldn’t stay in front of most guys and that he was at a huge disadvantage on most switches, but they took that into account and game-planned to minimize that weakness. Go back and watch film of IT defending players, and you’ll see a guy who pretty consistently took away his opposite’s preferred side (forcing right handers to go left and vice versa), and he usually steered them right into help defenders. If you know a player can get by you, you try to control how they get by you.

And I expect similar skills from Kemba, now that he’s finally playing for a team that values defense.

Grant Williams is no center, but he’s willing to rumble like one, and he’s picked up some of the All The Small Things slack with Horford having taken his high basketball IQ to Philadelphia. He needs to start knocking down perimeter shots sooner rather than later because opposing defenses are all but pointing at the hoop and saying, “Go ahead, shoot it. You’ll definitely make this one. You know you want to. C’mpn Shooooooot,’’ but he strikes me as someone who works to repair his flaws until we forget there was ever a problem.

I’m the guy who said that the ‘biggest disappointment’ for the Celtics this season would be the rookie class, and so far, I’m not regretting that call. However, I don’t expect Williams and Edwards to continue to struggle on the offensive end.

The good thing is that the whole team understands that these guys can shoot, and that eventually the shots will start to fall. If anything, they’re both probably putting more pressure on themselves to snap out of this funk than the rest of the team or the coaching staff is putting on them.

I’m not interested in hearing any narratives about how this is Brad Stevens’s kind of team, at least when it’s meant to suggest he’s not capable of coaching superstars and only thrives with overachievers.

You’re going to hear a lot of talk along these lines this season. And one of the more ridiculous aspects of it is the notion that Kyrie Irving is ‘a superstar’ and Kemba Walker is ‘an overachiever’.

Frankly, the difference between the two comes down to marketing and draft luck.

Kyrie has a signature sneaker deal with Nike, Kemba doesn’t. Kyrie got drafted by an inept organization that somehow lucked into re-signing LeBron James and a championship. Kemba was drafted by an organization run by a cynical businessman with an eye on the bottom line.

Finally: IT’s back in the starting lineup

Wizards are moving guard Isaiah Thomas into the starting lineup tonight against Detroit, league sources tell ESPN. He’s averaged 16.3 PPG and 7.3 APG in his first three games. He hasn’t started an NBA game since 2018 with Lakers.

I hope IT stays a starter, and honestly, if he shows the stuff he showed in Boston, he’s going to make Wizards fans (all five of them) wonder if they really need John Wall.