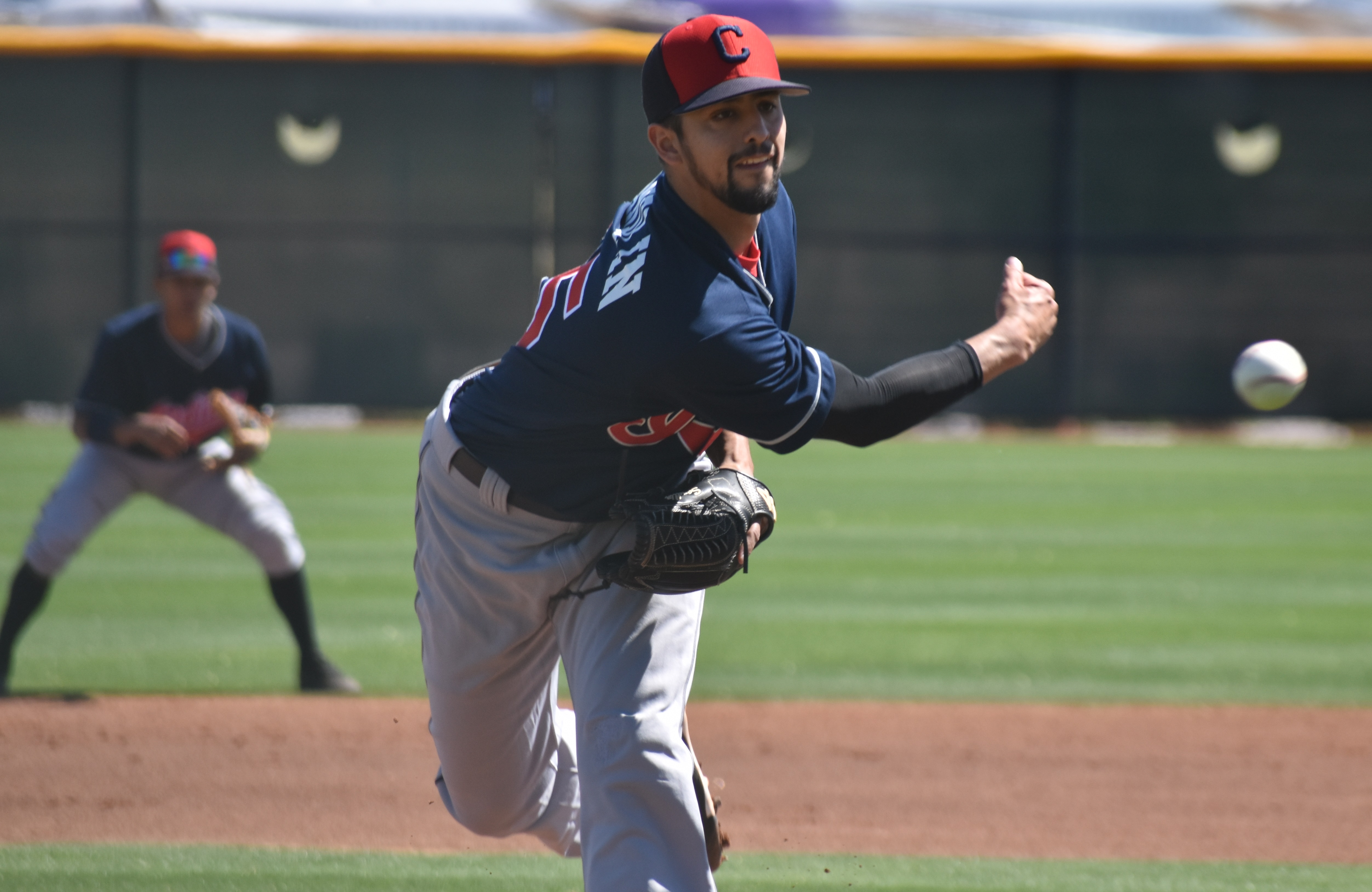 The following represents day six in Burning River Baseball’s Cleveland Indians prospect rankings and numbers 11 through 20. To qualify for the list, players must be in the Indians minor league system heading into the 2020 season and have zero games of Major League experience. The final ten will be split into two lists coming out in the next two days.

By Joseph Coblitz
Gaddis could potentially become the poster boy for the Indians current drafting strategy. As a junior at Georgia State, Gaddis had similar (or better) numbers to his previous seasons with an 11.1 K/9 and a 2.1 BB/9, but his ERA was a dismal 4.85, by  far the worst in his career. The Indians looked past this less than reliable stat and Gaddis became the Indians top drafted college arm in 2019.

Starting in the AZL, Gaddis was incredibly dominant, but he was even better during the second half of his rookie year in Mahoning Valley. Overall, he had a 14.5 K/9, 1.6 BB/9 and a much more sensible 2.73 ERA through 33 innings. It’s amazing that Gaddis slipped through the cracks and wasn’t drafted out of high school because, in his limited action so far, it looks like he has elite stuff.

By Stacy Hannan
Sandlin was in the midst of a meteoric rise in the Indians’ system before injury derailed him this season. Drafted out of the University of Southern Mississippi in 2018, Sandlin had the maturity and makeup to be a fast riser within the Tribe’s system. And that was just the case in 2018, as the side-armer shot from rookie ball all the way to AA before the end of his rookie season. After only three appearances in rookie ball, he dominated Low-A Lake County and High-A Lynchburg, before settling in Akron for the last five games of the season.

This year he pitched in 15 games for the Rubberducks, and striking out 27, walking eight, and giving up 13 hits 17.1 IP. His 1.56 ERA over that span was good enough to earn him a promotion to AAA Columbus. Unfortunately, Sandlin pitched in only nine games (nine IP) before being shut down out the end of June due to a right forearm strain. If Sandlin can return fully healthy next season, he should remain on track as a promising bullpen arm. In the nine AAA innings he did pitch, he struck out 11 and walked seven, giving up 5 hits and 4 earned runs. He needs more time in AAA once healthy to work on limiting base runners, but the stuff is there to succeed out of the Tribe’s bullpen in the near future.

Burgos warms up in the outfield prior to 2019 Indians MiLB spring training practice. – Joseph Coblitz, BurningRiverBaseball

By Joseph Coblitz
Burgos had his career delayed from the start after recovery from Tommy John surgery cost him all of 2016 and 2017, so it was extremely disappointing when an undisclosed elbow injury cost him 2/3rds of the 2019 season. He did make eight starts with Lake County and his numbers looked similar to those in 2018 with the AZL Indians and Mahoning Valley, leaving the premise of his extremely high ceiling alive.

The positive about Burgos is that he was drafted so young that he isn’t far behind despite multiple set backs. However, that could mean that he’ll have to work twice as hard to make up the difference. I saw him quite a bit in 2018 and love his slider. He didn’t allow an extra base hit to a lefty in 2019 and his floor should be as an extremely dynamic reliever. At the moment, however, he should still have MLB starter aspirations.

Benson stands at the plate for the Indians during 2017 extended spring training. – Joseph Coblitz, BurningRiverBaseball

By Joseph Coblitz
Benson is a very complicated subject as his peaks and valleys have been as extreme as they come in baseball. This year specifically, he dominated in his second season in Lake County and was named an All-Star for his performance. Then he had the worst run of his career in Lynchburg with just four home runs in 61 games and a .308 SLG (he hit 18 in 62 games in Lake County with a .604 SLG).

Will is a great all around athlete, something that shows in his fielding and base running, but his contact skills are among the worst I’ve ever seen. He still has that MLB ceiling, but his floor could be high A drop out if he can’t improve drastically in 2020.

I wrote extensively about Benson earlier this year to explain the situation in more depth.

By Stacy Hannan
Nelson found success in three levels of minor league baseball this season, after pitching in both Low and High-A ball in 2018. He started 2019 where he left off last season, with High-A Lynchburg. In eight games he went 1-0 and did not surrender a walk or a run in 9.1 IP. He also struck out 17 batters and gave up only three hits during that span. Nelson’s performance was dominant enough to earn an early promotion to AA Akron, where he went 1-4 with a 3.12 ERA in 23 games. He struck out 36 and walked nine over 26 IP.

He showed enough to earn another promotion to AAA, where he ended the season pitching in 11 games for Columbus. Over 12 AAA innings, Nelson went 2-0 with a 2.25 ERA, 16 strikeouts, five walks, and eight hits. Nelson has improved during each step of his short career, and he’s shown enough to at least warrant a look from the big league club as they rebuild their bullpen for the 2020 season. Nelson is a mature pitcher, with strikeout stuff and the ability to limit hits and walks. If he continues to show the promise he has over the past two seasons, he will likely get a look in the Tribe’s bullpen at some point next summer.

Vargas pitches for the 2018 AZL Indians Blue in the play-offs against Los Angeles. – Joseph Coblitz, BurningRiverBaseball

By Joseph Coblitz
Considered the Indians top international pitcher signed in years by many, Vargas brings the velo and a bit of wildness. He definitely reigned in his control in 2019 with the Scrappers, despite pitching through pain at least part of the season.

Vargas is a tough one to rank because his stuff doesn’t match his numbers to this point in his career, but assuming he can retain 100% health in 2020, I expect that situation to correct itself. With that in mind, we were extremely devaluing him last year at 77 and could be doing so again (although to less of an extreme) this year at 15.

By Stacy Hannan
In his second professional season, Scott split time between High-A Lynchburg and AA Akron. Scott, like several of the names on this part of the list, is a college arm mature enough to rise fast through the Indians’ system. Last year Scott pitched out of the bullpen, but this year Scott showed promise as a starter. With Lynchburg he went 3-7 in 12 starts, but had a respectable 3.45 ERA in that span, while striking out 74 batters and walking 20 in 57.1 innings.

After earning a promotion to AA Akron, Scott went 4-6 with a 3.94 ERA in 14 starts. He struck out another 74 batters in 75.1 AA innings, while walking 21. Scott appears to have the makeup to succeed as a starter or reliever, and he should be able to build on a promising 2019 season with Akron and possibly Columbus next season.

By Stacy Hannan
Broom is another college arm taken in the 2018 draft, and he could end up being the best of the bunch. Broom, a sidewinder similar to fellow 2018 draftee Nick Sandlin (#19 prospect) pitched five games in 2018 rookie league getting the call to the Low-A Lake County Captains. In 17 games for the Captains, Broom went 2-1 with a 1.17 ERA. He showed off his swing-and-miss abilities with 30 strikeouts in 23 IP. He started off this season with High-A Lynchburg where he pitched to an impressive 0.36 ERA (and 0.89 WHIP) in 17 games. He walked nine and struck out 35 batters in 24.2 IP before being promoted to AA Akron.

With the Rubberducks Broom continued his dominant season, going 1-2 with a 0.96 ERA and 0.88 WHIP in 25 games. Over 37.1 IP, Broom struck out 35 and walked 14, while giving up 19 hits in that span. Broom has simply dominated at each level of competition he has seen so far in his short career. If he can continue to develop at the upper levels of the minor league system next season, he is a prime candidate to help the Indians sometime in 2020 and beyond.

By Joseph Coblitz
Things couldn’t have started out much worse for Torres than they have over his first two seasons. Coming off a lengthy high school season, the Indians wanted to limit his innings in 2018 and he was held to six appearances and 15.1 innings.

During this run, he showed some of his elite talent as he struck out 22 to just 4 walks with a 1.76 ERA. After making just a brief appearance in 2019 extended spring training, however, he was shut down for the rest of the year with Tommy John surgery. Luckily for Torres, he’s still very young and has the ability level to potentially jump straight to A ball next year like Cody Morris did this season. Given how early in the season his surgery occurred, he should be ready to start shortly after the start of the 2020 season. As of late October, he had already started his throwing program on his way back to full health.

By Joseph Coblitz
A compact righty with great stuff and command, Morgan rose rapidly through the ranks over the last two years, starting 2018 in Lake County and finishing 2019 in Akron (he also made one spot start in Columbus). Morgan has continued to refuse to walk hitters in addition to having a high k-rate in each of his three seasons with Cleveland after playing three seasons for Gonzaga.

Morgan is very much in the same vein as recent Indian starters Shane Bieber, Zach Plesac and Aaron Civale and, if the Indians need just one starter from within the system in 2020, it very well could be him. Expect him to start in Columbus in 2020 where he could be a quick call up if he produces anywhere near his 3.39 ERA, 2.6 BB/9 and 9.3 K/9 from 2019.