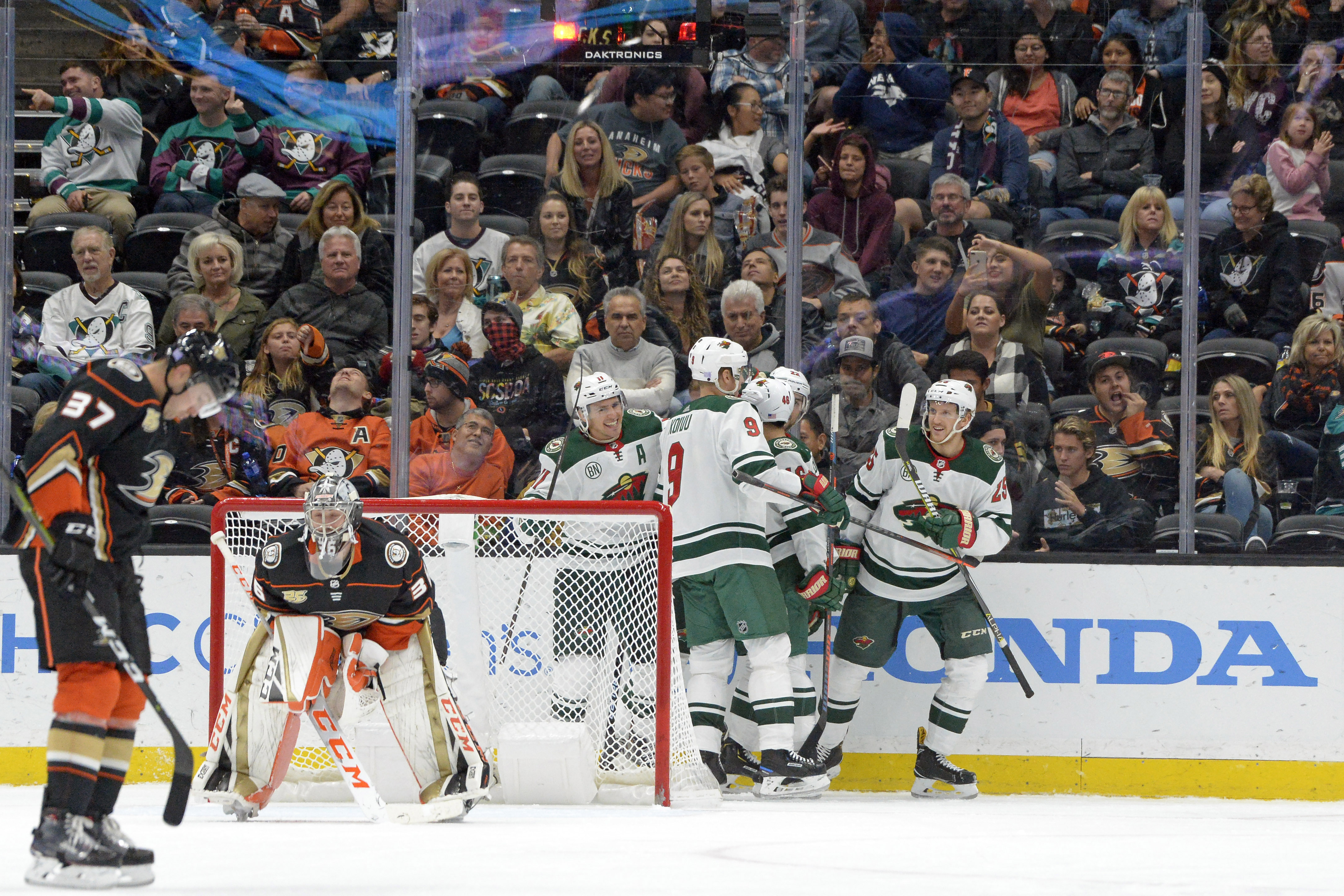 The Ducks have given their young prospects the keys and that has helped rejuvenate the club.  So far the Wild’s younger players haven’t had much of an impact and are part of the reason they sit at the bottom of the Western Conference standings.  Can the Wild get off to a better start on this road trip by finding a way to get a win over Anaheim?

1st Period Thoughts:  The game started with a cautious pace as both clubs seemed wary of making an early mistake.  Minnesota was using the board and area passes early which led to easy turnovers.  Both teams were settling for shots from the perimeter through the first 5 minutes which were fairly routine saves for John Gibson and Alex Stalock.  Neither club seemed to be really hustling and moving their feet much at either end of the ice.  Adam Henrique ripped a shot on goal from just inside the left faceoff dot that Stalock knocked down and the Ducks controlled the offensive zone.  Minnesota’s passes lacked zip, especially in their own end, just daring the Ducks to intercept and make the Wild pay for its carelessness.  Honestly, the Wild looked like a club playing in a scrimmage with little urgency and nonchalant play with the puck.  No one seemed to want to work their way in close for a shot instead dropping it back to a defenseman to hammer a slap shot on goal that had little chance to go in against a goaltender the Wild were not making any effort to screen.  A shot by Sam Steel went off the back of Stalock and off the crossbar and stayed out before being swept out of danger by the alert goalie.  A few minutes later, Stalock moved out of his crease to chase after a puck where he blocked a shot which popped up into the air and he had to hop to knock it down and he covered it up for a delay of game penalty.  On the man advantage the Ducks looked to have a great chance set up for Steel but he fanned on the attempt.  Moments later it was Stalock making a nice stop from long range by Michael Del Zotto and he was able to clear the zone himself.  Minnesota would get the kill and shortly after the successful effort the Wild would draw a penalty of their own as Ryan Getzlaf hooked Mikko Koivu.  The Wild wasted the first minute of the man advantage with poor passes.  Minnesota then sent out its more veteran group who moved the puck a bit more sensibly, but also more slowly as they set up a shot from the half wall by Koivu which did little to threaten Gibson who covered up the puck sitting near his left post.  The Wild would have its best chance on the power play late as Ryan Suter flung a wrist shot that Gibson blocked away but Zach Parise would whiff on the potential rebound chance.  The Ducks would counter attack after the successful kill and Nick Ritchie shot it on goal that Stalock kept out and as the puck bounced off the side of the net and went back into the blue paint Carson Soucy helped his goaltender cover up the biscuit to make the save as Korbinian Holzer looked on.  The period would come to an end, thankfully as the Ducks held a 10-7 lead in shots.  Not only did the Wild look sloppy, the pace of play was slow and painfully boring to watch.

2nd Period Thoughts:  The Wild appeared to have a little more jump in their skates to start the period but poor passing prevented them from generating much offensive off the rush.  The Ducks would counter attack Steel found  Rickard Rakell with a pass and he would move in close and fire a shot on goal that Stalock stopped but Rakell pounced on the rebound and he buried it.  1-0 Ducks.  Then not even a minute later the Ducks would add to their lead as Jacob Larsson‘s point shot would seem to deflect off the stick of Soucy and go over the shoulder of Stalock.  2-0 Ducks as the Wild coaching staff looked at the replay hoping to see something to challenge.  There was nothing to challenge and the Wild were down by two.  Minnesota would draw a penalty as Holzer was tagged for tripping.  On the power play the Wild established themselves in the zone but no one was willing to screen Gibson and so it was simply a matter of moving the puck around just to play catch with the goaltender on an unscreened shot from the perimeter.  With another failed power play behind them, the Wild tried to work for a goal but still all too often the Wild were not willing to stand in the high traffic areas to deprive Gibson’s view of the shooter making it pretty easy for him to make saves.  Even when the Wild managed to pick the right player to dish the puck to, Wild forwards continued to fan on the puck more than a person trying to cool down hot soup.  Minnesota started to swarm in the offensive zone but no one really wanted to stay and linger near the Ducks’ crease, but the pressure brought Anaheim’s defense closer to their goalie which left some room for Kevin Fiala to blast a one-timer by Gibson.  2-1 game to some apathetic boo’s by the sparse home crowd.  The Wild would resume their assault on the Ducks’ end of the ice, taking any chance to fire shots on goal but Anaheim’s defense was doing a good job of getting sticks and bodies into shooting lanes so Gibson wasn’t too stressed.  Minnesota kept attacking as Stalock’s long outlet pass was tracked down by Jason Zucker who worked the puck back to Suter who hammed a slap shot on goal that Gibson stopped and covered up for a whistle.  The Wild came dangerously close to tying the game as Matt Dumba rang a shot off the post.  Minnesota was pinching with its defense while the Ducks tried to counter via the stretch pass.  Maxime Comtois would blast a shot off a faceoff that Stalock snagged out of the air with a pretty slick glove save.  The Ducks did a decent job of playing keep away over the last minute of play as Mats Zuccarello tripped up Sam Steel as he was about to enter the Wild zone.  Minnesota would kill off the 45-ish seconds of power play time without incident but knew they had work to do to start the 3rd period.

3rd Period Thoughts:  Minnesota’s penalty killers did a nice job of challenging the point men, and Joel Eriksson Ek intercepted a Ducks’ pass.  At that moment Mats Zuccarello left the penalty box and Eriksson Ek found him behind Anaheim’s defense with a long pass and he’d race in and beat Gibson 5-hole on a wrist shot.  2-2 game.  The Wild continued to attack and some nice work down low in the Anaheim zone, as Zuccarello won a small race for a puck that he swung back to Zucker who managed to feed a pass over to Eric Staal who lifted a backhander top shelf by Gibson.  3-2 Wild to stunned silence from the home crowd.  The Ducks would try to answer back as Rakell got off a hard shot that Stalock stopped and then he had to be sharp to deny Jakob Silfverberg on the rebound.  Minnesota spent most of the rest of the period defending their one-goal lead, and weathering the storm in its own end and then working pucks deep and trying to force Anaheim to waste precious time working hard to get the puck back.  Stalock had some big saves down the stretch, while the Wild were quick to sweep and clear pucks out of the zone.  Anaheim was sending pucks towards the goal hoping for a deflection or a lucky tip of the puck.  The Ducks would pull Gibson for an extra attacker with 2:21 left in the period.  Minnesota did not waste any time taking advantage of the empty net as Koivu won the draw in the Wild zone and Parise got by Getzlaf for an easy goal.  4-2 Wild victory.

F – Nikita Nesterenko (Chilliwack, BCHL) ~ the thin and lanky Boston College-commit had a goal as Chilliwack fell 4-3 to the Surrey Eagles on Saturday.  Nesterenko has 6 goals, 17 points, 15 PIM’s in 19 games.

G – Hunter Jones (Peterborough, OHL) ~ the big-bodied goaltender had 27 saves in Peterborough’s 8-3 win over North Bay on Sunday afternoon.  On Monday night, the Brantford, Ontario-native had 23 saves in the Petes’ 5-3 win over Kingston.  Jones has a 12-2 record, 2.65 goals against average and a .913% save percentage with 1 shutout this season.

LW – Kirill Kaprizov (CSKA Moscow, KHL) ~ the super skilled winger has returned from his injury and picked up right where he left off by tallying a goal on 3 shots in CSKA’s 3-0 win over Ak Bars Kazan on Saturday.  On Monday, Kaprisov had a secondary assist on CSKA’s lone goal in a rare 4-1 loss to Neftekhimik.  Kaprizov has 13 goals, 24 points, 2 PIM’s and is a +12 in 22 games.